A U.K. man is donating his nights to making sure that those in need don't go hungry.

By day, this 20-year-old man from Birmingham, England, who wishes to remain anonymous, is a bartender. But by night, he dons a Spider-Man suit and takes to the streets to feed homeless people. The "Birmingham Spider-Man," as he is known, says that he hopes his work will show others that everyone deserves a helping hand -- no matter their situation.

"I've learned that everyone is the same, we're all part of the human experience and I ... believe that we need to look at everyone as humans and help each other the same as we would a close friend," he told The Huffington Post in a message.

While the 20-year-old has been involved in volunteer work for years, he started his night rounds about a month ago. A few nights a week, he begins his routine around 9 p.m., and purchases sandwiches with his own money. Then, much like a comic book hero, he gets into "uniform" in a quiet alley. Fully suited, he hands the food out to people in need.

Though the superhero suit may just seem like a fun costume, he says it actually draws attention to his cause.

"Before when I was handing out food, no one would take a second look," he told HuffPost. "But when they see Spider-Man handing out the food they come over and ask what I'm doing and are really interested. Most importantly [they] become inspired to get involved themselves."

The Birmingham Spider-Man's good deeds have already attracted the attention of many community members, who have offered to donate money. The do-gooder doesn't accept their donations, and instead, urges them to go out and get involved.

Watch a video of the Birmingham Spider-Man feeding the homeless below:

PHOTO GALLERY
How To Help Homeless People This Winter

Anonymous 'Spider-Man' Feeds Homeless At Night, Proves Anyone Can Be A Superhero For Change
How To Help Homeless People This Winter 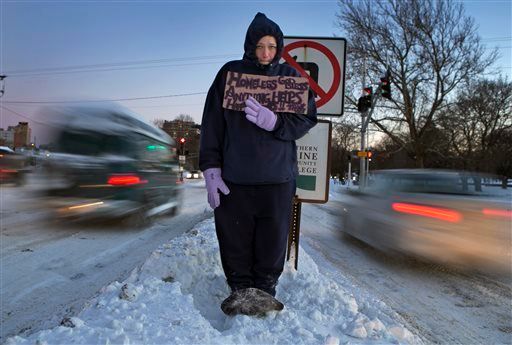 1 / 3
Help find shelter for homeless individuals
Many communities have <a href="http://nationalhomeless.org/references/directory/" target="_blank">emergency programs that serve the homeless and other vulnerable populations</a>. Stoops says that the best thing would be to arm yourself with as much information as possible about the various social services in your community (Where's the nearest shelter, for instance? Or what time does the neighborhood soup kitchen serve lunch?), so that you can offer this valuable information to the people you wish to help. <br> <br> If, however, you don't have this information handy, or if you are unwilling, for whatever reason, to personally approach the person in question, then you should consider calling a local crisis hotline (<a href="http://www.forbes.com/sites/dandiamond/2014/01/04/how-to-help-the-homeless-when-it-gets-this-cold/" target="_blank">Forbes has a partial list of numbers you could call</a>) or 911. <br> <br> <em>(In the photo above, 28-year-old Victoria Morris is pictured panhandling in Portland, Maine, where the temperature at dusk was 7 degrees Fahrenheit on Friday. Morris, who is homeless, finally sought shelter when she could no longer feel her toes, the AP reports.)</em>
AP