Scientists may make fun of astrologers for saying that your birth month exerts a profound effect on your personality and direction in life, but a new study finds them singing a similar refrain.

Data scientists at Columbia University Medical Center uncovered a surprising correlation between the month you're born and your risk of developing various health problems, including heart disease, viral infections and ADHD.

While the idea that your birth month can predict your health destiny might seem outlandish, the scientific community has welcomed the findings.

"The great thing about working in science is that scientists are incredibly open-minded people -- as long as you have the data to back up your claims!" Dr. Nicholas Tatonetti, assistant professor of biomedical informatics at the university and the study's lead author, said in an email to The Huffington Post. "When we present these results we are always careful to point out that birth month is a proxy variable for environmental exposures. It is well known that environment can be a very important factor in early development, especially when in the context of some particular genetic variants." 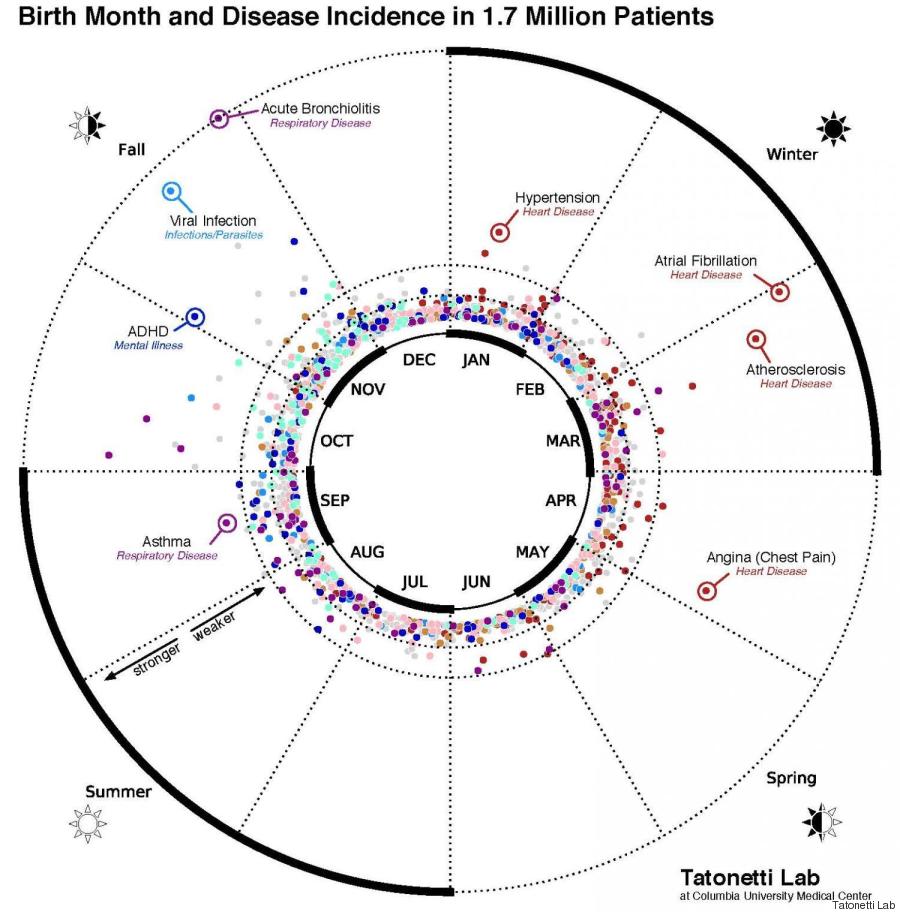 For the study, the researchers analyzed a sample of 1.7 million people, taken from New York City medical databases, for more than 1,600 diseases.

They found that 55 of those diseases were "significantly dependent" on birth month. Why? The time of year that you're born dictates many of the environmental factors you're exposed to during birth and early development, the researchers explain.

"Seasonality is a proxy for variable environmental factors present at the time of your birth, and we are learning more about the very large role that environment, and gene-environment interactions, plays in our development," Tatonetti said. "This could be one way to start mapping out those gene-environment effects.”

Here's a rundown of some of the most important findings:

But before you schedule a visit to the doctor, the researchers caution that the risks identified aren't great enough to cause concern or warrant taking preventive action.

"The most exciting aspect of our research is that it may open up new research opportunities into what the exact environmental exposures are that lead to increased risk of certain diseases," Tatonetti said. "Once we have those mechanisms, then we may be able to make lifestyle and diet recommendations."

The findings were published in the Journal of the American Medical Informatics Association.

Check out the video below for a more detailed explanation of the research.