I was quoted on June 17 in the New York Times about the latest trend of having a professional photographer in the birthing room. I commented that today's pregnant celebrity pre- and post-birth images (many of them Photoshopped, I presume) may pressure women to feel they have to look perfect for the birth photo.

What wasn't quoted was my assertion that the photographer scenario also reflects our über-confidence that everything will go OK -- and thankfully, most of the time it does. But occasionally it doesn't. And let's face it: If you were truly scared to death, the way our great-grandmothers were, you would be focusing on staying alive, not staying photo-ready.

I have to admit that when I first spoke to Elissa Gootman, the journalist, my gut reaction was, "what kind of weirdo wants their portrait taken at this most intimate moment?"

And then I realized I did something a zillion times weirder. After I had a benign breast cyst removed, I asked my radiologist for the pathologist's contact information so I could get my breast cell images. I had no lofty medical goals, I just thought it was a cool keepsake and was curious to see the inside of my breast -- a microscopic version. Not surprisingly, the pathologist thought it was odd, or rather, that I was. (I think he told my radiologist that it was one of the strangest requests he had ever received, or something of that ilk.) I explained that my dad was a pathologist and it turns out -- in a sort of Jewish-pathology-geography kind of way -- that he not only knew my father, but attended Rosh Hashanah services with his in-laws at the same synagogue that my parents attend. Well, one thing led to another -- including a call to my mom, who told me that he married into a nice family from my home town in New Jersey -- and lo and behold, I received an emailed image of my breast cells, which I had blown up into a 5-by-7.

My intention was to do an outside/inside duo of photos. Just a piece of the outside, not a hooters-style image. Just an anonymous chunk of the outside. But when I announced my artistic endeavors to my family, Jack (my son who was about 16 at the time) said that if I framed my inside-outside breast photo, he'd never invite friends over for the rest of his life. I think my other son, a few years younger, said something along the lines of, "ew, that's disgusting."

So here are my breast cells -- just the inner beauty without the outside image, which would reveal a lot of flaws. It will never be a decoration in my home. 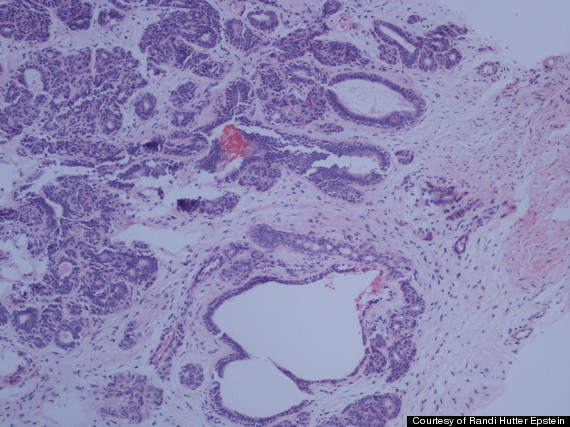 And now that I think about those crazies hiring photographers in the birthing room, maybe they aren't the strange ones after all. I mean, I have to admit, as gorgeous as cell biology can be, nothing would have topped the stunningly exquisite scene of my newborns emerging into the world.

Author, 'Get Me Out: A History of Childbirth From the Garden of Eden to the Sperm Bank'; adjunct professor, Columbia University