Twenty boisterous 5-year-olds ran rampant, popping balloons and bantering about trains and superheroes. A few were coloring, playing with Legos, or tearing into the candy bowl, trying to stay out of the sightline of the adults. But instead of engaging in the birthday festivities, my kid was sitting in a phone booth, door pulled shut, mouthing questions to me through the glass and pleading with his eyes for me not to wander too far off. To be fair, this was a fascinating phone booth, an original from the restored train station where the party was being held. But it wasn't just that he had never seen a rotary dialer before; the booth was an escape from the loud, chaotic world of a birthday party. "Fun" for most kids, but not mine.

He didn't want to go to this party (or many others before it), and I struggled with whether I should force him to socialize or let him hang out at home with the comfy stuffed animals that he uses to meet his sensory needs, or let him play our weekend's 12th game of Monopoly. After some discussion about what it means to be a friend, he finally agreed to try the party, "for a little while."

This was a 'drop off' event, where parents could stay or go.

"You would never choose to leave, would you?" he asked.

"Of course not," I assured him.

The truth is, I couldn't drop him at a party, or anywhere, even if I wanted to. He has Asperger's Syndrome, a condition on the autism spectrum that makes social skills difficult. In my child, it also manifests as extreme anxiety. It is at times like this -- a birthday party -- that his condition is most evident. When we're alone, or he is around people who" get" him, he is funny, charming and joyful. He has the intelligence and insight of someone far beyond his years; his understanding of his world is so profound that I often forget that I'm talking to a child.

When we got to the train station, my boy took one glance around, shot me a look that said, "I told you so," spotted the phone booth and made a bee-line to his new refuge, with barely a glance at the birthday boy. A half hour later, I coaxed him out and we retreated to a room where a giant model train was set up. It was quieter and darker than the party room, and easier on my boy's extremely sensitive eyes and ears. I stuck close by, a hand resting firmly on his shoulder as several children elbowed their way in front of him for a better view of the model. He stood, leaning his body into mine, peering through the glass display at the tiny train town and the still-lit Christmas tree, asking a soft, steady stream of questions about this or that feature. Even though he didn't run away -- his natural instinct -- when the other kids crowded in, I could feel the tension in his neck and see the pace of his breath quicken as his tiny chest rose and fell. He was anxious. His brain isn't wired to process the kind of unruliness that surrounded him, but he was trying hard to stick it out.

Instead, he thrives in order. His structured universe includes a specialized private school with brilliant teachers, supportive parents and wonderful children; an occupational therapist; a neurologist; a psychologist; a nutritionist; clued-in karate instructors; a music teacher to nurture his very musical mind; and a gymnastics coach who works on social skills while building tunnels and imaginary dragons, all while jumping on a trampoline. He also has a wonderful pediatrician who has known him since he was an hour old, and who has urged us to avoid labels and understand that all children have "a little of this, a little of that."

Everyone on his 'team', which also includes devoted grandparents, close friends and a loving nanny, is working hard to coax him into a world where he will feel safe and is allowed to be himself. There are strangers -- in grocery stores, coffeehouses and bookstores -- who find his personality endearing and engage him on his level, but others don't have the patience for the verbal barrage that inevitably comes when he is interested in something, which is everything. We try to find the former as often as possible, and quite often do.

We're lucky. We were accepted into a unique school with a mile-long waiting list that specializes in kids with pervasive development disorder, ADHD, sensory processing disorder, and anything else that would make it hard to excel in a mainstream classroom. There is no financial aid, and tuition rivals that of a good liberal arts college. However, since staring there, his confidence has soared.

We're also fortunate that we received a diagnosis when he was just 4, which provides a framework for navigating the confusing path of caring for him. We knew early on that something was not quite right -- his extreme sensitivities, fear of large crowds and rhythmic pacing around the living room seemed to go beyond quirkiness. His separation anxiety increased with age rather than the reverse, and testing when he was three revealed a genius-level IQ.

Still, armed with all this information, we found very few places to turn. While researchers and advocates are working furiously to find the cause of autism spectrum and related disorders, the resources for those on the front lines raising these children is dismal. We spent a year each on waiting lists at two major hospitals to see specialists. The public school system simply saw a bright kid who didn't meet their requirements for special assistance. Doctors recommended occupational therapy to help with his fine motor, executive functioning and proprioceptive skills. But it stopped there.

It was only through a steady stream of networking, word-of-mouth and good parenting blogs that we've pieced together a plan of support for him. And despite his progress, we still have many daily struggles; we are only at the beginning of our journey. I can't help but wonder what is happening to the thousands of other children who are diagnosed each year -- and those who are undiagnosed -- who haven't found the same resources. I am certain that too many children are falling through the cracks.

After an hour at the train station party, an employee noticed him eyeing something behind the ticket counter, and offered to show him around. The man calmly explained how the station was restored, showed him old stamps and tickets, explained the railway system and the destinations and let him open and close the ticket window. I could see my boy relaxing with each bit of information, and soon, he began peppering the man with questions. He had found his comfort zone.

Last year at this time, the birthday party would have been a sweat-inducing experience at a minimum, and probably would have included some tears -- from both of us -- and a quick exit. There might have been a meltdown, and there definitely would have been some sideways glances and low murmurs from other parents.

I'm not sure whether he has matured, if I have, or if it's both of us. I've stopped trying to figure out that part, and instead, I'm slowly learning his world alongside him, and taking it one deep breath at a time.

By the time we said our good-byes, he had calmed down enough to look at his hosts directly and say "Thank you for inviting me!" We left before the birthday cake was served, but nonetheless, the success of this party was pretty sweet. 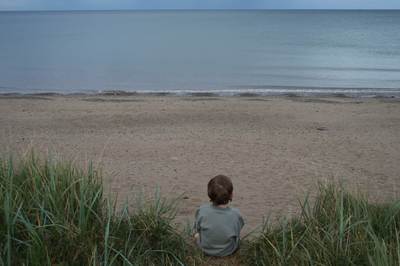 More:
anxietyParentsAspergersseparation anxietysensory processing disorder
Newsletter Sign Up
Raise the kind of person you'd like to know
Subscribe to our parenting newsletter.
Successfully Subscribed!
Realness delivered to your inbox