This woman of Lithuanian heritage has grown to become one of the greatest scientists and primatologists of the 20th century. Biruté Mary Galdikas has spent more than 40 years living and studying the behaviour of orangutans inside the once pristine rainforest of Borneo, Indonesia.

"Dr. Galdikas," together with the local community's help, created in 1986 the Orangutan Foundation International, an organization seeking to manage the rehabilitation and protection of wild orangutans, as well as aiming to develop environmental conservation programs in the Bornean rainforest.

During this interview, Biruté Mary Galdikas shares the details of her life in what happened to be one of the most unexploited and unknown places on earth, as she then exposes the factors that are today threatening the region's outstanding singularities. Today, Borneo is still home to an unequaled number of wild and endemic species, including the Bornean orangutan, found nowhere else in the world, that are perishing at an astonishing rate. 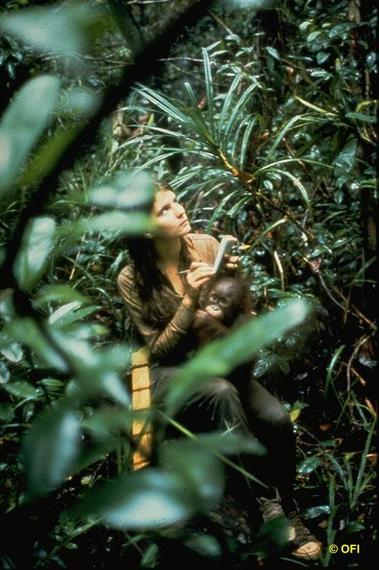 What has changed in Borneo since you first arrived?

"Everything has changed in Borneo. Borneo 43 years ago was a very, very different place than it is now. There were no roads. The towns were villages. There were no telephones and there was virtually no electricity. The main form of communication with the rest of the world was by telegram. The mail came in once a week because only one plane came in a week...every Saturday morning. Travel was by water and there was just about nothing to buy in the stores. Almost everything you found came from China. I remember buying canned abalone which we would get for maybe 4 or 5 dollars and I recently saw the same brand, the same can of abalone, also imported from China for 120 dollars, so I don't know if that tells you how much the world in general has changed. Oh, and there was absolutely no television until the 1980's. What happened because there was no television, is that there were many ceremonies between the local tribes (the Dayaks), many community celebrations that seem to have ceased once television came into the picture. People now have other forms of entertainment. Borneo was a totally different place...and the main difference ecologically was that the tropical rainforest was absolutely everywhere."

You first arrived to study orangutans but now you are also involved in environmental conservation programs to help maintain the oldest rainforest in the world. When did come to realize this was necessary?

"The first day I arrived. Even before I came here I had realized this was necessary because I had spoken to people who had worked in Borneo. I already knew that there were conservation issues that needed to be dealt with. It took us one week after our arrival (with her former husband Rod Brindamour) when we heard trees crashing down across the river, somewhere in the distance. I didn't know what it was. It sounded like distant thunder. I didn't recognize the sound but Rod had worked as a logger in high school in British Columbia. I remember him saying hurriedly; "Someone's cutting down trees!". So he immediately went and confronted the illegal loggers who were in the reserve and managed to stop them, but just for a while.
Our conservation work started very early, but the situation in 1971 was of no resemblance to what it is now..."

Would you say that the palm oil industry poses today a larger threat to the rainforest than any other industry has done before?

Well, some people, not me, would say that palm oil has been one of the biggest "booms" in Kalimantan (Indonesian Borneo) because it has provided a level of employment to many people that had not been seen before. So yes, there are pro's and con's but in my opinion what palm oil has done is destroy the natural ecology of Borneo, probably one of the richest ecosystems on this planet. It's causing many species of animals and plants that are not to be found elsewhere, to go extinct. Palm oil is the biggest threat to free-ranging orangutans in the world and if orangutans go extinct then it will be because of the palm oil industry. Today, the orangutans as wild populations are basically gone.
So yes, there is no other menace that can pose such a threat to the Bornean virgin rainforest, and the few orangutan populations that remain, as the palm oil industry."

What would you tell the western consumer who unconsciously buys products containing palm oil?

"I would tell them that anyone who unconsciously buys products that contain palm oil from Borneo or Sumatra figuratively has orangutan blood on his or her hands!"

There seems to be an important lack of interest from people living in the developed countries towards these situations we have mentioned, mainly affecting the developing countries. To your opinion, why is this happening?

"I think it's the fact that all these problems are so far away from the daily lives of people living in developed countries that it's difficult for them to measure and imagine the dimensions of the destruction going on. Every single person who comes and meets with orangutans in Borneo or Sumatra and has an intimate encounter, goes away feeling that their life has changed in some way and usually becomes committed to the protection of orangutans, in whatever shape or form. You can no longer ignore it once you've seen it.
Another reason, in my opinion, is charity overload. In the west, we are assaulted by so many causes that it is sometimes difficult to chose the ones that need to be prioritized. The more you think about these matters, the more unhappy you get. What all these people want to hear is that the problems are being solved. It's information overload. How are you going to find out about palm oil being the threat to orangutans when there is something else being a threat to killer whales or elephants or lions? But if you think about the whole situation of animals going extinct, forests disappearing...what does it have to do with? It has to do with human greed, it has to do with the human economic situation and humankind's everlasting ambition. The reason African elephants are going extinct is because the Chinese and other people in the far east want ivory trinkets. President Obama has just passed a law forbidding the trade of ivory in the United States, which is a marvellous initiative but will this really help African elephants? It won't until the Chinese as a nation completely stop purchasing ivory. The issues are so mixed up that it has become difficult for people to get a clear focus on them."

Would you change the way "big-budget NGO's" operate nowadays?

"Before anything, I think it is essential to be on the ground. That's what is important. I noticed that the most effective NGOs and Foundations are the ones that work closest to the ground, locally, and you can see what they are doing. For instance, an organization that I very much support is the Sea Shepherd. They become between the whales and the whalers. There's really nothing murky about that. For that individual whale, his or her life has been saved by that Sea Shepherd vessel."

Dian Fossey and Chico Mendes, among other examples, are people whose lives were lost while enduring a fight against major economical interests. As an activist, what comes to your mind when you hear these names?

"Well Dian Fossey was my friend and my colleague. In a sense we were sisters because we were both mentored by the late Louis Leakey (as so was Jane Goodall). A very funny woman, with a great sense of humour who I think basically sacrificed herself for the mountain gorillas. She knew exactly what she was doing...
Chico Mendes I never met. I was honoured to win an award in his name (Sierra Club Chico Mendes Award 1992). Obviously he was a hero, just like Dian was...and there's all kinds of heroes that we never hear about. Dian and Chico were definitely two of the great ones who should never be forgotten."

After all your experiences, including putting your own life at risk, what would you tell all those activists that nowadays face similar situations?

"It's very hard to give other people advice because you need to know the specific situation that they're in, so an approach that may work in Malaysia might not work in Ghana. I can simply say that these people have to follow their dreams, their passion, and go with that passion, wherever that dream may lead them. But the situations are different. I've talked to African conservationists and the problems that they face are very distinct from the ones with which we have to deal with in Indonesia."

"I can't really say for sure but I feel very strongly that I was born to work with and study orangutans. There's something about them that always "spoke to me". I remember one of the first photographs I saw of an orangutan when I was a child. From the upper lip up he could have had been a human being. There was something about the eyes in that picture that reflected our own human eyes. Orangutans are 97% human in the sense that they share that percentage of their genes with us.
I remember years ago when a Taiwanese man looked at me and said: "You were an orangutan in your previous life". Maybe I was (she says laughing). I find it easy being around them. I think I was born to be with orangutans." 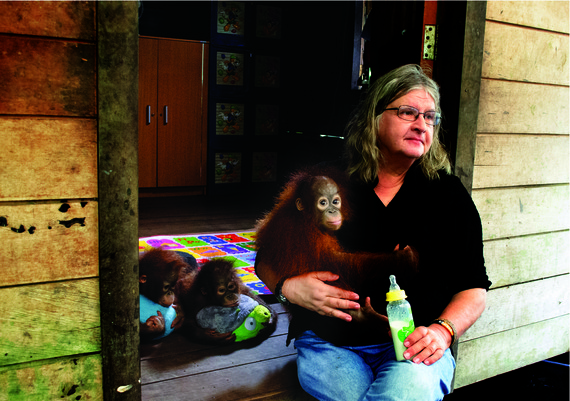 Finally, what have they taught you?

"They have undoubtedly taught me about human nature; that our strength is their weakness and their strength is our own weakness. Orangutans are very strong and solitude is their natural way of life. They do not necessarily cooperate very much with each other. They have never been able to form groups, to have a culture where transmission of new ideas is possible in a consistent way. Our weakness as humans, turns out to be, in a way, our strength. We are totally gregarious, social animals, we absolutely need each other...we hate solitude no matter how much we praise it. The worst thing you can do to a human is put her or him in solitary confinement; people go crazy. You put an orangutan in solitary confinement and she or he is perfectly fine.
So what I've learned from them is something about the basic nature of human beings and a little bit about our own evolution. Look at his eyes (she looks at an orangutan poster in the living-room)...there's something about the species eyes that reflect their soul, and their soul is basically the same as ours. Indeed, they are not our closest relatives in the animal kingdom. Chimpanzees are, but genetically orangutans are closer to our ancestors than we are. Orangutan genetics have not changed as much as our own have. Maybe that's why we find them so compelling. They are not our ancestors but they are our ancestors' cousins.
People who really get to know orangutans always fall under their spell. That doesn't happen so much with Chimpanzees for example. I am not comparing but Chimpanzees are much more emotional, more human. Orangutans sit back and meditate.
I've devoted 43 years to them and I really wish I could do more, I rack my brains every single day for how to help them more."