In its latest episode, the LGBT politics show Critical Thinking on Gay Chicago TV takes on the topic of bisexuality, which has for far too long been the focus of jokes, discrimination, misinformation, and just plain ignorance from both anti-equality forces and the LGBT community itself. Extreme biphobia and bi erasure, meant to make the bisexual community invisible even within the larger LGBT rights movement, have created an atmosphere of misunderstanding that the episode addresses head on.

To help break down the issues of biphobia, bi erasure, and bi history in the LGBT movement, the episode features an in-depth discussion with bisexual activist, Brother Michael Oboza, an activist monk and Michael Page Life Time Award winner who founded the New Liaison for Bisexual programs at the Center on Halsted in Chicago. The discussion looks at the issues that face the bisexual community from both anti-equality forces and from within the gay and lesbian communities.

It's a hard place to be in for many in the bisexual community. The very concept of bisexuality often finds itself trapped in a position of both invisibility and hypervisibility -- despite the fact that bisexuals constitute the largest population within the LGBT community. Can you imagine the pain caused by not only being rejected and demeaned by anti-equality forces who call you "sinful" or "sick," but also being rejected or told you don't exist by the very community you are supposed to be part of? In truth, how are these claims by some in the gay community any different than the homophobic rhetoric we fight against from the far-right about gays being a perversion or something than can be changed or prayed away. The truth is, they aren't. Comments like "bisexuality is just a stop on the way to gay" can be as demeaning and damaging as calls of fag and dyke. 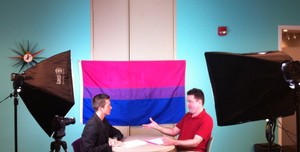 These facts are underscored by the groundbreaking report from the San Francisco Human Rights Commission called "Bisexual Invisibility: Impacts and Recommendations." The report contains some startling facts that only further show how vital this conversation is, saying:

Bisexuals experience high rates of being ignored, discriminated against, demonized, or rendered invisible by both the heterosexual world and the lesbian and gay communities. Often, the entire sexual orientation is branded as invalid, immoral, or irrelevant. Despite years of activism, the needs of bisexuals still go unaddressed and their very existence is still called into question. This erasure has serious consequences on bisexuals' health, economic well-being, and funding for bi organizations and programs.

We cannot, as a community, be part of erasing a vital and thriving part of our movement and history. In the same fashion, simply throwing a "B" into the acronym LGBT isn't enough-- we have to celebrate, educate, and support bisexual people in our movement with true inclusion and visibility in all areas of our community. Having frank and honest discussions amongst ourselves like on this episode can help that process along.

Ignorance, close-mindedness, and refusal to accept others is what we are fighting AGAINST as LGBT people -- we have to demand better of ourselves and be examples for others of what true acceptance looks like.

Make sure you catch the entire interview on Critical Thinking Hosted by Waymon Hudson on Gay Chicago TV, with new episodes added every second and fourth Thursday of the month. You can join the show's discussions on Twitter with the hashtag #WaymonWrapUp and on our Critical Thinking Facebook page.