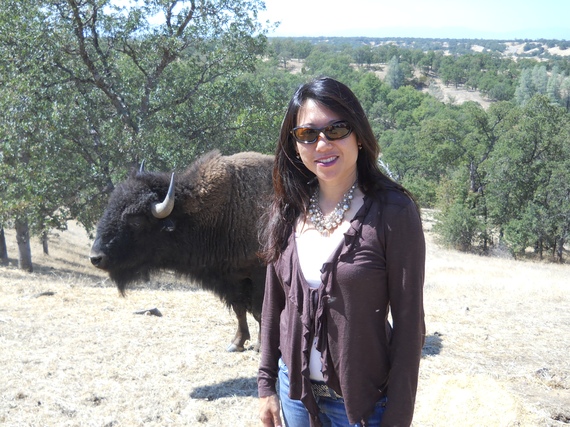 Very shortly, we will all owe a big thank you to President Obama and Congress for honoring the North American Bison as our National Animal, joining the Bald Eagle, as an emblem of America.

From the earliest images of the Great Plains, bison (not to be confused with the buffalo) have always been a part of the American Indian culture. Before the 1800's, it was estimated that there were as many as 25-50 million bison roaming North America. By the 1890's, fewer than 1,000 remained on the continent. Today, there are about 450,000 bison in North America: 400,000 are raised as livestock, 2,500-5,000 bison live in Yellowstone National Park and six bison cows can be found at Golden Gate Park, in the heart of San Francisco.

Did you ever wonder how the bison landed in Golden Gate Park? Well, I did....

During my past 12 years in office, I have had the pleasure of working with 1,000+ student interns on a variety of interesting projects. One of my favorites was learning about the bison at Golden Gate Park. The first bison, named Ben Harrison (after the sitting President of the United States) was purchased by Park Superintendent John McClaren on February 26, 1891. He was followed by a cow from Wyoming who was named Sarah Bernhardt, after a famous entertainer. Since 1891, the number of bison in San Francisco varied over the years and welcomed a dozen new females in 1984, given by Richard Blum as a birthday present to his wife and then-Mayor Dianne Feinstein. Sadly, by the summer of 2011, there were only 3 bison cows remaining.

Mr. Wimer was honored we sought out his assistance, given his fond early childhood memories of visiting bison at Golden Gate Park. On December 6, 2011, Mr. Wimer delivered seven bison cows, each of who were eight months old. Six were purchased for $10,000, through the generosity of the Theodore Rosenberg Charitable Foundation, and Mr Wimer donated the 7th as a gift to the people of the City and County of San Francisco. Mr. Blum once again provided assistance by donating $50,000 to update the bison's crumbling paddock.

The 2011 re-population project was a concerted team effort that would not have happened without the support of Mayor Ed Lee and key city department directors: Phil Ginsburg, General Manager of the SF Recreation and Park Department and Tanya Peterson, Executive Director/President of the San Francisco Zoo. Today, the care of the bison herd is split between the SF zookeepers who feed them their hay & fresh produce, and the SF Rec and Park gardeners who maintain their pasture.
As of today, there are only six of the 2011 bison cows still alive, and they can be expected to live for another 20 to 25 years, but they need company! The City and County of San Francisco would excitedly welcome 6 more urban bison members. If you're interested in helping with "Golden Gate Bison - 2016," please let me know at Fiona@FionaMa.com.

Chairwoman Emeritus of the California State Board of Equalization