"A man always has two reasons for doing anything: a good reason and the real reason," as J.P. Morgan succinctly put it a century ago.

The same applies to finance today, and the attacks against the Ethereum team from a minority of Bitcoin users continue to surprise and amuse me.

Yesterday listening to a series of Ethereum developer presentations in San Francisco - running the gamut from using the blockchain to run an energy "micro-grid" that requires no centralized power plant or utility company, to a playful "Ethereum birthday faucet" that awarded people a small amount of Ether whenever they sent money to the contract yesterday.

No one seemed particularly threatened by Ethereum Classic, but it was discussed, and one person told me they weren't aware of any well-known developers working on Classic. When I asked if any real money was involved in Classic, the name I heard was Barry Silbert.

Silbert is founder and CEO of the Digital Currency Group and creator of the Bitcoin Investment Trust. The Trust describes itself as "invested exclusively in bitcoin & derives its value solely from the price of bitcoin."

Looking for more information on Silbert's choice to support Ethereum Classic, I came across the following recent exchange on his Twitter account: 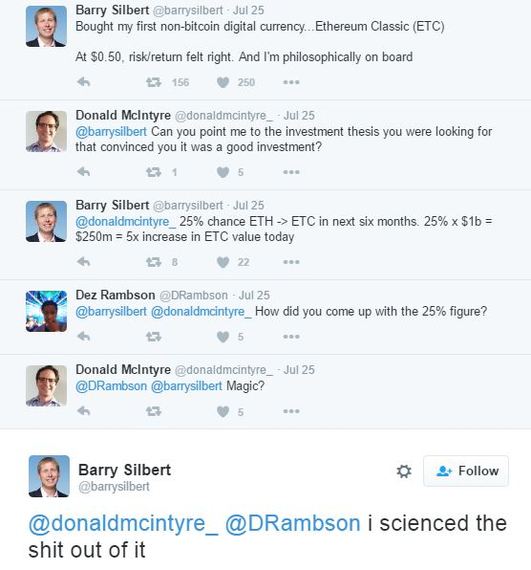 To little old me, at least, I fail to understand how cynical calculations about how much a pre-fork orphan chain might make for someone over the next six months is "philosophically" grounded.

And I continue to believe that listing failed orphan chains as "currencies" on major crypto exchanges is a very bad idea. Not only because it makes things more difficult and confusing - which perhaps is where the "philosophical" love for Ethereum Classic is coming from - but because Classic has a hashrate so low that a group of activist miners could, if they wanted to, 51% attack and destroy Classic. Ethereum Proper, on the other hand, has significant hashrate... making it a smart contract platform less likely to be compromised by activist miners than its weak castaway orphan.

But I'll admit, I have not "scienced the shit" out of this as Mr. Silbert has, so maybe I am in the wrong. He has not replied to my requests for an explanation or clarification of why he is suddenly so "philosophically" passionate about Ethereum Classic, when the year-old Ethereum smart contracts platform did not interest him.