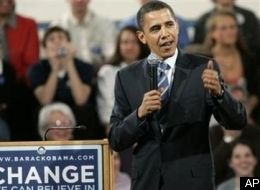 Well! It's been a big weekend for wondering if Barack Obama cares enough about working-class voters or if he's one of those Liberal elites who enjoys a nice merlot while windsurfing. I have been amazed to see how the report from HuffPo's own Mayhill Fowler from that San Francisco fundraiser has triggered the latest campaign imbroglio, and a "crisis" for the Obama campaign that have had commentators muttering darkly that this is a big problem for Obama. You all watch the Sunday morning shows (and if you don't, catch up here), and it was topic A yesterday, as well as across the cable networks on a fairly unrelenting basis (well, on MSNBC when it wasn't running a documentary involving blood spatters on the walls. Beware carelessly leaving the TV on after Tim Russert). Speaking of Tim Russert, Meet The Press dove enthusiastically into this issue yesterday (no HuffPo credit? C'mon, Tim! Let it go!) and which then made its way on to NBC Nightly News. Today, the controversy is still going strong, with Obama and Clinton sniping at each other (almost as good as real sniper fire!) and the debate has made for yet another day's worth of cable news clips.

But here's the thing: Why is it such a big deal that Obama said people who had been screwed economically were bitter? Wouldn't you be? Hell, I've been bitter about a lot less. That's a red-herring, for the media and for Hillary. That's not what hit such a chord. It was the statement that those bitter, screwed Pennsylvanians responded by "clinging" to their guns, and to a lesser extent their religions and prejudices. Geesh. It's obvious why that makes Obama look elitist and it has nothing to do with his poor upbringing or the fact that he was a legacy at Harvard: It dismisses American Second Amendment-revering gun culture as nothing more than a security blanket .That's it, really — but that's a lot. It's the reason that Democrats stay the hell away from gun control. Fact is, guns are sorta big in this country — and in the last two elections, roughly 60% of gun owners voted for George W. Bush. Fact is, Democrats are vulnerable to being depicted as effete elite Liberals who can't relate to the regular folk, which is how a decorated military man like John Kerry was somehow cast as a rich, snooty wimp against a chickenhawk who never quite made it to active duty. That's why a slip-up like this can be deadly — especially when magnified a zillionfold by the media echo chamber.

But it can also be deadly for Hillary Clinton. You know, I rather liked the image of Hillary doing 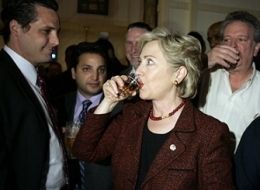 shots in Indiana (Crown Royal, no less). I also liked the image of Obama bowling. Why not? Frankly, it looked like they were both having fun. But Hillary has a problem with overkill, and let's just say she's emptying her magazine into this one when a single slug would do. Judging from the amount of furious debate this has triggered — and the fact that, incredibly, these comments actually have legs enough to dominate the news cycle four days later — the gaffe was real and so, too, was the chord it struck, but it's disingenuous for Clinton not to acknowledge that gee, some Pennsylvanians might just have legitimate reactions to their sucky economic situation. It's amazing to me that she hasn't learned by now that whenever she joins in on cirticism of Obama, it boomerangs back to her.

Even more disingenuous: The whole duck-hunting thing. Does she not remember Mitt Romney, varmint hunter? Or Mike Huckabee, slayer of Iowan pheasants? Just say you support the Second Amendment and be done with it, okay? Because the rest comes dangerously close to pandering (and no, that's not the same as that time you totally blew the head off a panda).

There's an irony here, and it's coming up fast in the form of the one-year anniversary of the Virginia Tech shootings. That falls on Wednesday, April 16th — two months and two days after the last horrific school shooting at NIU, and never mind the spate of similiar shootings at schools and malls and churches around then, too. I noted back in February that there had been nary a whisper about gun control reviving as an issue, despite the number of shootings. Not a whisper from the media, either (indeed, ABC's Charles Gibson broadcast from Illinois two nights in Feb back to back - one on NIU and one tailing Obama in his home state - and never made the connection.) Nothing like an episode like this to underscore why the Dems are so afraid of wading into Second-Amendment issues — and this is going to make them just that much more, um, gun-shy.

Upshot: This is an issue, yes, but a pretty darn overblown one at this point, and — for a change — has little to do with the candidates' plans, positions or policies. Those, in the long run, are what's important here — and, I would note, what Barack Obama was talking about in the first place. Is it important that he respect the average American, from big cities to small towns? Of course — but there is more to determining that than just one misbegotten turn of phrase. Like, say, how he bowls.

Related in Flashbacks to 2004:
Cheney portrays Kerry as threat to gun owners [MSNBC]
The politics of Cabela's [MSNBC]

*If it's not called a magazine, well then, that thing that holds the bullets.