Glow-in-the-dark cats? It may sound like science fiction, but they've been around for years. Cabbages that produce scorpion poison? It's been done. Oh, and the next time you need a vaccine, the doctor might just give you a banana.

Here's a look at the some of the weirdest genetically engineered plants and animals already in existence -- and many that are coming your way soon. 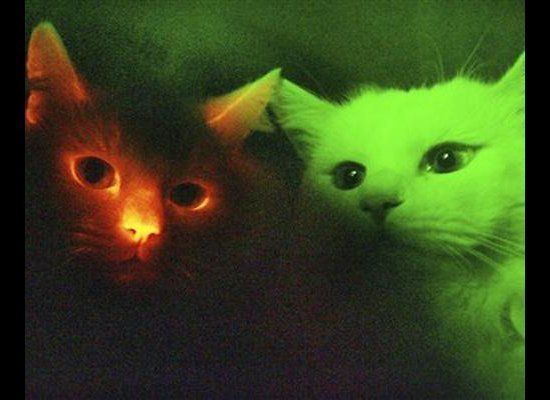 1 / 8
Glow-in-the-dark cats
In 2007, South Korean scientists altered a cat’s DNA to make it glow in the dark and then took that DNA and cloned other cats from it — creating a set of fluffy, <a href="http://cosmiclog.msnbc.msn.com/_news/2007/12/13/4349719-cloned-cats-that-glow" target="_hplink">fluorescent felines</a>. Here’s how they did it: The researchers took skin cells from Turkish Angora female cats and used a virus to insert genetic instructions for making red fluorescent protein. Then they put the gene-altered nuclei into the eggs for cloning, and the cloned embryos were implanted back into the donor cats — making the cats the surrogate mothers for their own clones. What’s the point of creating a pet that doubles as a nightlight? Scientists say the ability to engineer animals with fluorescent proteins will enable them to artificially create animals with human genetic diseases.
AP