He has been stripped and broken, prodded and sampled, scanned and DNA tested. We have filmed him, argued over him, and visited him in our millions. If King Tut was looking for some peace and quiet in the afterlife, he must be sorely disappointed.

When British archaeologist Howard Carter discovered Tutankhamun's treasure-filled tomb in 1922, he described its sumptuous but jumbled contents as like "the property-room of an opera of a vanished civilization." But the greatest prize was the king himself. His mummy, found dripping with gold, sparked a worldwide obsession with King Tut that continues today: his mask is used to sell everything from museum tickets to budget flights, and his curse has spawned an entire genre of films.

In my new book The Shadow King: The Bizarre Afterlife of King Tut's Mummy, I've investigated the story of the mummy since Carter's discovery, from its shadowy role in international politics to the secrets of its DNA.

Here are some of my highlights from the intriguing modern life of King Tut: 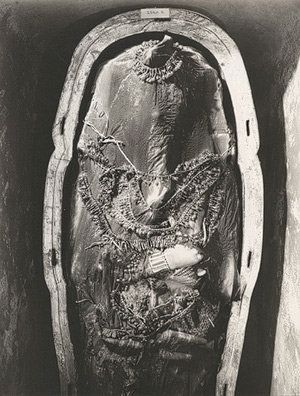 1 / 10
1. He was scraped from his coffin with hot knives
Tut was buried in a coffin made of solid gold, so heavy it took eight strong men to lift it. But when Howard Carter and his colleague, anatomist Douglas Derry, tried to take the mummy out, they had a problem. Sticky black unguents poured over Tut during his funeral had turned rock hard over the centuries, gluing the mummy to the bottom of the box. Attempts to melt the resin in the sun didn’t work, so Carter and Derry broke off the mummy’s arms and legs, cut off its head and sawed the body in two – then scraped out the pieces with hot knives.
Metropolitan Museum of Art