Returning home on her lunch break earlier this month, Altoona, Pa., mom B.J. Ross was heartbroken to discover that her beloved 15-year-old cocker spaniel, Bigsby, had died in her absence.

"She was my absolute best friend and soul mate," Ross, 36, told The Huffington Post. "She used to do everything with me."

Gathering Bigsby into her arms, Ross drove to the Central Pennsylvania Humane Society with her mom to get the dog cremated.

Ross told the Altoona Mirror that Bigsby's death was the second loss she'd had to endure in the past year.

Her other cocker spaniel, Samson, had gone missing last July near her former home. Ross said Samson's loss had come as a terrible blow.

"I hung up pictures, I called the humane society and the radio station, but I couldn't find him," she said.

Sitting in the waiting room at the humane society almost a year later, Ross was faced with another painful goodbye.

"I was really distraught. I was just crying and crying," she said, adding that she was so overcome with emotion that she barely noticed the man with a brown-and-white cocker spaniel who was in the waiting room with her.

Thankfully, her mother, who was by her side, was paying attention.

"My mom overheard the man say that he found the dog about a year ago in Juniata," said Ross, referring to her old neighborhood. "She got up to take a look at the dog and said, 'That's Samson!'"

Ross said she was stunned when she took a look at the dog herself.

"I was like, you gotta be kidding me. It's been a year and there he was, it was him," she said. "I'm just crying and crying, and my mom asks me, 'Are you crying because you're happy or sad?' and I said, 'Both.'"

John Aurandt told the Altoona Mirror that he had found Samson in a parking lot.

"Me and my boy went up and down the streets trying to find the owner," he said. "I thought he was stray, but my boy wanted to keep him."

Aurandt said he was reluctantly giving Samson up because he didn't get along well with his other dog.

"They were aggressive toward each other," he said. "I just couldn't keep him."

After showing staff members pictures of Samson to verify her claim, Ross was permitted to take her lost dog home.

"The timing was just amazing. Just five minutes later and he would've been surrendered," Ross told The Huffington Post. "And if my mom hadn't come with me, I never would've seen him."

Humane Society Volunteer Coordinator Tammi Ingham told the Altoona Mirror that she was amazed by the improbable reunion.

"I get the goosebumps just thinking about it...There are odd things that happen here, but nothing like that," she said. "It sure made my day."

Ross said Samson has not left her side since his return and her two young children are over the moon that he's back in the house.

Though she admits she's still deep in mourning for Bigsby, she said her reunion with Samson has been nothing short of a "modern-day miracle."

"That day was so surreal. I had just lost my best friend but I was so happy to have my dog back," she said. "You know, I wasn't looking for a dog, but as my mom said, maybe he was looking for me."

Check out these images of B.J. with her dogs below:

Pennsylvania Woman, B.J. Ross, Cremates Beloved Dog Only To Be Reunited With Long-Lost Pet On The Same Day (PHOTOS)
B.J. And Samson 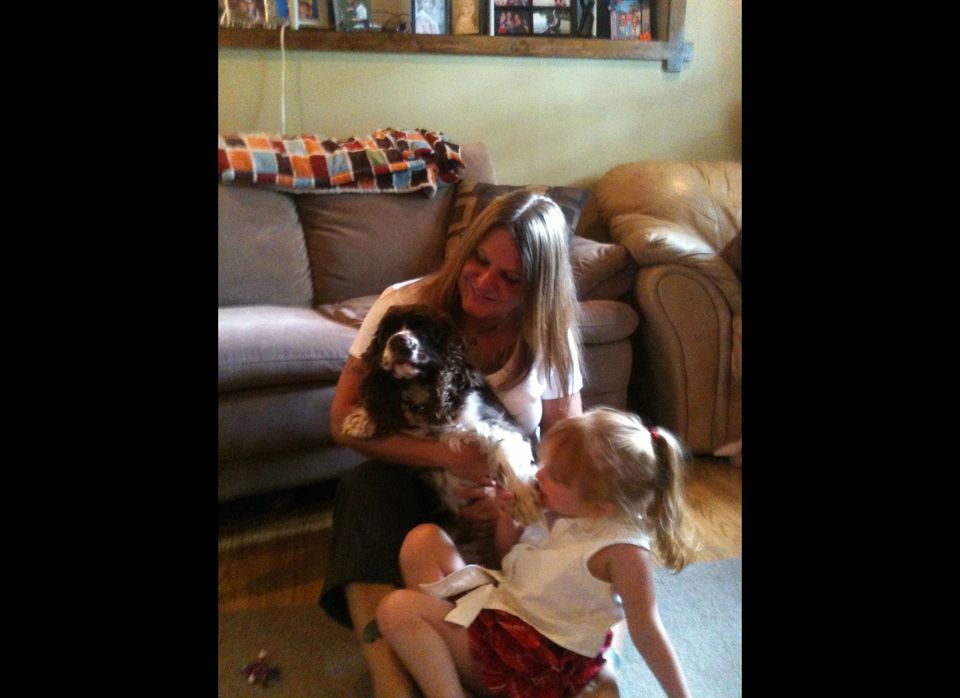