In 2011 Björk released "Biophilia," the music album slash app that opened up an interactive galaxy for participants to simultaneously listen to and modify songs.

Centered around a main "mother" app, "Biophilia" branches out into a network of mini-apps, one for each song, that incorporate elements of music, engineering, design, cinema and philosophy. (To give an example, a song called "Virus" becomes "a kind of love story between a virus and a cell. And of course the virus loves the cell so much that it destroys it." )

To summarize, it's not your average LP. 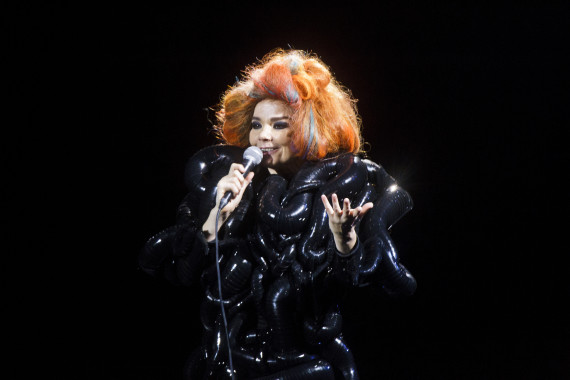 The revolutionary hybrid experience soon became the first downloadable app in MoMA’s collection. And now the hyper-creative technology is being transformed into a school curriculum for children between the ages of eight and 15 in several countries around Europe. Yup, Björk is about to become the coolest faux grade school teacher ever.

The Biophilia Educational Programme, as it's called, is a collaboration between the Icelandic songstress and Scandinavian educationalists funded by the Nordic Council. The program is rigorously informal and non-academic, designed to draw children away from their desks and into the depths of the imagination. Thus far the initiative has proved especially popular with "kids who have ADHD [attention deficit hyperactivity disorder] or dyslexia," Björk expressed.

The experimental program, which aims to "inspire children to explore their own creativity, and to learn about music and science through new technologies," has thus far been tested in Oslo, Reykjavik, Paris, São Paulo and Los Angeles.

"Björk has never ceased to experiment and surprise," said Paola Antonelli, MoMA's Senior Curator of Architecture and Design. "The multidimensional nature of her art -- in which sound and music are the spine, but never the confines, for multimedia performances that also encompass graphic and digital design, art, cinema, science, illustration, philosophy, fashion, and more -- is a testament to her curiosity and desire to learn and team up with diverse experts and creators. It was just a matter of time before she would invade and conquer the territory of design."

The electric force that is Björk proved long ago she was out to revolutionize the relationship between music, technology and environment, thus placing herself at the conceptual forefront of musical innovation. It looks like she just may be at the core of educational reform as well. We're just waiting to see what she'll wear on the first day of class. (Fingers crossed for swan dress!)

Take a virtual tour through Biophilia's virtual universe below and let us know your thoughts on this bold educational advancement in the comments.

Björk's 'Biophilia' Curriculum Will Be Adopted By European Schools
Bjork's 'Biophilia' App
1 / 10
Cosmogony
<i>"Heaven's bodies/whirl around me/make me wonder"</i> <br>The "Cosmogony" app resembles the welcome screen for the app, which features the different songs as constellations in space, or "heaven's bodies." It's home to an introduction to the entire <i>Biophilia</i> app, narrated by David Attenborough. He explains in his magnificent voice: "Just as we use music to express parts of us that would otherwise be hidden, so too can we use technology to make visible much of nature's invisible world. In <i>Biophilia</i>, you will experience how the three come together -- nature, music, technology. Listen, learn and create."