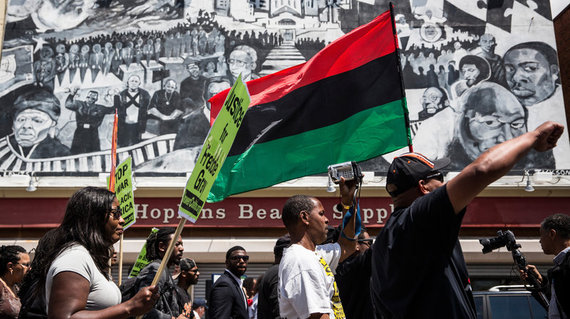 I was in Baltimore most of this past week. The one day I wasn't, I was in Missouri, talking to folks involved in the Ferguson protests for Michael Brown and addressing the St. Louis Chapter of the Association of Corporate Counsel about how to counter bias in the workplace and throughout the larger community.

Yet I didn't begin to fully appreciate the impact on me of the week's events until I listened in shock to Maryland State's Attorney, Marilyn Mosby, announce on Friday afternoon the indictments against the six police officers for killing Freddie Gray.

When the fog of shock lifted, I was flooded with a powerful cocktail of emotions: joy, pride, hope, faith -- feelings that are the exact opposite of the profound groove of disappointment to which Black folks in our country have become accustomed.

I realized as the tears ran down my face that I had adopted a stoic stance about these things; all week I hadn't allowed myself to feel the sadness of what Freddie Gray, his family and Black Baltimoreans, young and old had suffered.

Now, that the weekend is behind us: the tears, the rallies, the curfews, the arrests and the celebration, I reflect on four central lessons I learned from the past week:

1. There is a Generation Gap

As I listened closely to young people on the streets of both cities (and in a meeting for healing convened by The Association of Black Psychologists in Baltimore that my son took me to), I heard about the clear disconnect between the older and younger generations in the Black community that must be bridged. We older folks talk peace and decorum, talk about preserving property, being law-abiding and careful. We say we understand the rage, but many of us judged the actions that set off the week's mayhem as wrong. We believe we know the right way things should be done.

By contrast, the young folks -- of different races, socio-economic and educational backgrounds -- are unwilling to put up with what we have learned to accept: injustice. They look at where we are in our country and they are not impressed with our ways of handling social justice issues. They are angry; they are discovering the emperor has no clothes and they are indignant about it. They have been seeing the country's bounced check for some time, and Freddie Gray's death seemed to be the last straw.

For sure, young people are not a monolith and their experiences differ greatly, yet they are more connected across their differences than they are to us. They are not as afraid as we, their elders, are and they are more sophisticated. They have watched uprisings all around the world and they feel they are the generation to make our ideals real. They want us to listen to them because they have things to teach us and tell us.

I was so impressed and admittedly surprised when my son and I arrived one hour before curfew to Pennsylvania and North Avenues one night (where the CVS burned) to see small clusters of black young people from the neighborhood waxing poetically and intelligently to reporters about institutionalized racism and arguing with each other about the efficacy of tactics to get the world's attention. It's also clear that they don't need to rely on CNN or Geraldo -- they have their own cameras, their social media, their own ways to communicate and organize. In fact, my son and his girlfriend, active in social justice issues in Brooklyn, got on a bus and came to Baltimore to support me and join the protest for Freddie Gray. That kind of caring about other communities and coordinating and connecting this and other social justice issues across geographic and racial lines is happening all over the country and world through young people.

2. The Mainstream Media Doesn't Get It

And they make things worse! I was disgusted by the way the media reported the happenings on the ground in Baltimore last week. They showed a lack of curiosity about what is really happening and they created distortions. "Baltimore is on Fire!" Really? The church fire and connected senior citizens center was tragic, but the blaze in every telecast and news report was miles away and on the other side of town from the ONE intersection -- yes, only one intersection -- where most of the disturbance was happening. It was absolutely unknown whether the fire had anything to do with the "riots."

My visit to Ferguson underscored this distortion. Did you know that Ferguson is a suburb -- and it looks like a suburb -- and Mike Brown was killed on a small street within an apartment complex with grassy knolls? The memorial to his death is still in the middle of the street where he was shot and lay for 4 hours and has been there since August of last year. Those involved in the protests talk about how they had 118 days of protest, all peaceful during the day, but the media only wanted to show when there was violence, usually at night.

I guess I was naïve but after this week, I am questioning all the news coverage I see on TV. I am glad social media makes it easier to get access to alternative outlets for news, and that I have forged some connections on the ground that allowed me to hear some things that are hard to listen to -- like Baltimore youth explain how their very presence in their own neighborhood is cause for the police to stop them day after day, and the intrusive and humiliating ways they are searched. These methods rob them of the dignity that all human beings deserve. And there are so many stories that we never hear-such as how the bail for the young men who were arrested on Monday night for breaking the windows of an unoccupied police car exceeded the bail set for the six police officers indicted for homicide. The officers are now free. That young man is not.

3. This Issue is Black against Blue

Not black against white. One reporter I spoke to explained that in Ferguson, the issue was blacks and whites; but in Baltimore it was more a black against blue thing. Once we saw the faces of the six indicted officers -- three of them black -- I understood what he meant. The police department in Baltimore has a healthy percentage of black officers, but the young black men in the city know that a black cop can be just as brutal as a white one.

Of course, not only black people experience police misconduct. But there is racism involved in the over-policing of black and under-resourced communities and criminal offenses committed in these neighborhoods are treated far more harshly than the same behavior in white and affluent neighborhoods. This means black people experience the majority of these acts of brutality.

Also, just because an officer is black doesn't make him or her immune to anti-black racial bias. Studies on unconscious bias would suggest that police of whatever shade who only work in poor and working class black neighborhoods, are "primed" to see the whole group of blacks living there as criminals. If they circulated to other parts of the state which are predominantly white there unconscious brain would be reminded that criminals come in all colors, and they could perhaps break the automatic association of "black man = criminal."

And finally, being black does make one impervious to a powerful police culture. We hear over and over, "police bleed blue." The "brotherhood" continues to indoctrinate cadets well after they finish at the academy about what the "real deal is on the streets and how they should behave. The culture relies on its members to go along to get along. The few police officers on the right side of this issue whom I have talked to say there is definitely a high cost to individual officers who deviate from the blue code. And that means that both racism and police culture combine to create the kind of law enforcement agencies, the blue, that the black folks feel they can't trust.

4. Baltimore Has Been Chosen

When Freddie Gray died, I wondered: will the fact that Baltimore has a black female Mayor, a black police commissioner, black city councilors and a black woman as its State's Attorney make a difference in this outcome? Not to mention that 45 minutes south of Baltimore we have a black President and the first black woman Attorney General. And when the curfew was imposed, we discovered that the head of Maryland's National Guard was also a black woman.

The outcome of this case will definitely reveal if our broken criminal justice system and police culture is more powerful than the elected individuals, many of them African-American who have sworn to protect the city and provide justice for all. So we will see. But the fact that our first glimpse of justice in a long time was delivered unapologetically by the State's Attorney and in the perfect pitch of righteousness by a bright, young newcomer -- a woman of color -- made me hopeful, proud and grateful to God.

I am optimistic that Baltimore is perfectly positioned to lead our country in reforming our justice system and alleviating the disparity of economic and educational opportunity that underlies and fuels the problem. And it is not just the officials in Baltimore that gave me hope last week, but the individuals from so many communities in the city, from the preachers to the gang members that came together to pull the city back from the brink of chaos. They started conversations and commitments that held until the State's Attorney gave us a reason to believe a different reality is possible.

The past week uncovered how much hard work is left to be done. There are so many deeply ingrained structural issues to unpack and tackle. We have to listen and seek to understand those who are suffering the most. We have to work to create the programs, the support, the relationships and infrastructures of opportunity.

This is not new, but last week more of us woke up to the urgency of the issues and the need for all hands to be on deck. Many with the privilege to do so have distanced themselves from the problem or tried to help from the perspective of altruism. But with the curfew in place, businesses couldn't miss the connection between their fates and the fates of young people living in Gilmore homes, like Freddie Gray.

This is not charity work, this is the work of building a future for us all. I wish it didn't have to happen this way, but I learned a great deal this past week. We have been given an opportunity, a moment in time and we must seize it.