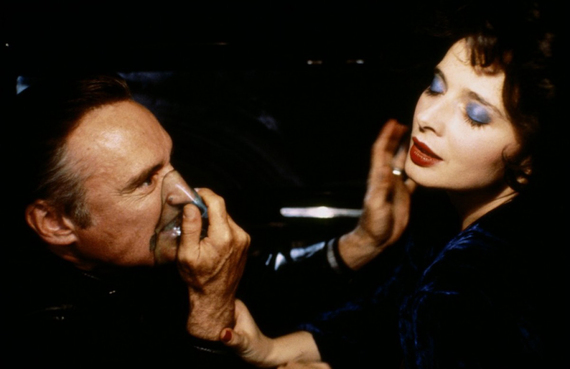 Ah, the 1980s! Ronald Reagan was president, the Evil Empire was on the ropes, and everyone was singing the praises of traditional family values. Into this culturally conservative milieu, David Lynch threw a hand grenade called Blue Velvet (1986). For its thirtieth anniversary, Blue Velvet is playing at Film Forum from March 25th through March 31st in a gorgeous new restoration.

Although today considered a classic, Blue Velvet was extremely controversial when it was first released. The Academy of Motion Picture Arts and Sciences nominated Lynch for Best Director but did not nominate Blue Velvet for Best Picture. Film critic Roger Ebert accused Lynch of "misogyny." (You would think, as the screenplay writer for Beyond the Valley of the Dolls, Ebert would be more open-mined.) But what really upset folks was Lynch's jaundiced view of small-town life.

Blue Velvet is set in the fictitious logging town of Lumberton, North Carolina. (Get it? Lynch is heavy-handed with place names.) When college kid Jeffrey Beaumont (Kyle MacLachlan) discovers a severed human ear in a vacant lot, this sends him down a rabbit hole of murder, mystery, and sexual mayhem. MacLachlan previously starred in Lynch's ill-fated adaptation of Dune (1984), another sort of rabbit hole.

At the heart of Blue Velvet is a twisted lover's quadrangle: High school senior Sandy Williams (Laura Dern) is attracted to Jeffrey. But Jeffrey is intrigued by nightclub singer Dorothy Vallens (Isabella Rossellini). And Dorothy is involved in an abusive, incestuous, sadomasochistic relationship with amyl-nitrate snorting mobster Frank Booth (Dennis Hopper, as one of the screen's creepiest villains). Movie trivia: Frank Booth's name is borrowed from Henry Fonda's sadistic killer in Once Upon A Time In The West (1968).

The fact that this all takes place in a small town instead of the big bad city really frosted some viewers' flakes. Ron and Nancy Reagan never did anything like that! Or maybe they did: Ron's nickname for Nancy was "Mommy."

Dean Stockwell is also on hand as Ben, the effeminate host of a private social club and Frank's partner in crime. Stockwell memorably performs a karaoke version of Roy Orbison's "In Dreams." Speaking of "candy-colored clowns," that could describe Lynch's color palette--supersaturated, giving everything an air of unreality. The new restoration makes the colors pop even more than before.

Lynch returned to many of these same themes in his television series Twin Peaks (1990-1991 on ABC). Indeed, Twin Peaks can be seen as an unofficial sequel to Blue Velvet. Kyle MacLachlan returns as FBI special agent Dale Cooper, a grownup version of amateur detective Jeffery Beaumont. (In Blue Velvet, Jeffrey says he wants to be a police detective when he gets out of college.) Once again, he is investigating a murder in a fictitious logging town: Twin Peaks, Washington. (Yes, the name refers to tits.) Once again, he is uncovering corruption and perversion hidden everywhere under a facade of innocence and decency. In 1990, the question on everyone's lips was "Who killed (homecoming queen) Laura Palmer?" We now know it was SPOILER ALERT her own father, Leland Palmer (Ray Wise), as part of some demonic sex cult. Leland may or may not have been possessed by an evil native American spirit known only as "Bob," who may or may not only exist in his head.

Lynch is currently working on a sequel to Twin Peaks for Showtime. It will pick up the story twenty-five years after the original ended; most of the cast, including MacLachlan as FBI special agent Dale Cooper, is returning. It's been a troubled production: at one point, Lynch walked off the set, claiming he wasn't getting enough funding to realize his vision. Then, presumably, more money was found, and shooting resumed. The show is scheduled to air sometime in 2017. The real question is, can David Lynch still shock jaded millennials? In Donald Trump's America, I'm betting he can.