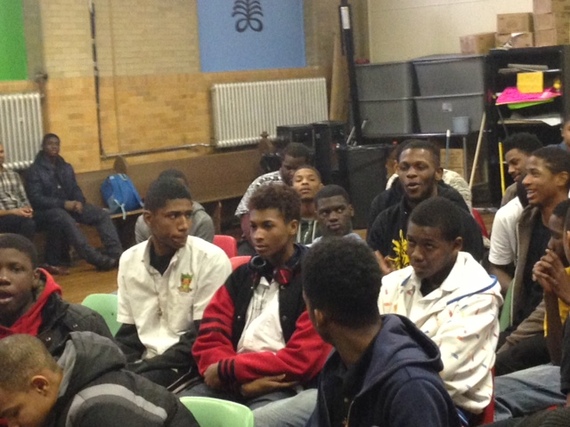 Boys will be boys, unless they're black -- then they're adults, suggests new research.

Black boys aren't so different; they want what every other adolescent has: the ability to make mistakes. Sure outings with the family, arcades or movies with just the boys and sneaking girls in the house after dark are among the likely desires of their hearts -- as it is with most boys -- but the dream of fair treatment in the real world remains at the top of the list. Despite the world's view of them as heartless brutes waiting anxiously to terrorize the innocent, black boys are human, and they have feelings, too.

Many would question why I would make the polarizing observation as if it's not obvious that black boys have feelings and they're human. Well, something happened recently that reminded me its not so obvious after all.

According to new research published by the American Psychological Association, 176 police officers in large urban areas (mostly white males with an average age of 37) were tested to determine levels of two distinct types of bias, prejudice, and unconscious dehumanization of black people by comparing them to apes.

Black boys as young as 10 may not be viewed in the same light of childhood innocence as their white peers, but are instead more likely to be mistaken as older, be perceived as guilty and face police violence if accused of a crime.

The evidence shows that perceptions of the essential nature of children can be affected by race, and for black children, this can mean they lose the protection afforded by assumed childhood innocence well before they become adults. With the average age overestimation for black boys exceeding four-and-a-half years, in some cases, black children may be viewed as adults when they are just 13 years old.

Both men are professors at UCLA.

I wonder now, with the research confirming my thoughts, if the white female officer who allegedly grabbed Darrin Manning's testicle so hard that he required emergency surgery thought he was 21, instead of a few months into 16. And even if she thought he was 21, does that make it right?

During some boardroom banter among executives, the idea for an organization called the "Racist Protection Agency" was put on the table. After the laughter quickly died down, the hurtful truth was this idea may need to be considered. Who protects the innocent from racism, more importantly from racist police?

One Philadelphia lawmaker who was aggressively stopped recently by police said he's going to do everything in his power to make driving while black not a crime. When discussing the controversial Darrin Manning case, Councilman Curtis Jones, Jr., chair of the public safety committee, said Darrin Manning is one of many African-American in the city who everyday are stopped unjustly. The disproportionate amount of blacks stopped in Philadelphia is exacerbated by the statistic that says the average police complaint takes nearly two years to be addressed and only five percent are ever looked at, with even less resulting in police officer's punishment. Jones, who was visibly annoyed with the current condition of the system, is now calling for police to wear cameras and so far seems to be gaining public will on his side.

But beyond what taxpayers are going to be able to see with the cameras live 24/7, we fundamentally need to change what police see in young black men. Repeatedly, the media has been singled out as the reason for inaccurate perceptions of black men and boys. Distorted media depictions can lead to negative attitudes toward African-American males, such as increase in public support for punitive approaches and tolerance for racial disparities.

Despite the majority of American's silence on the issues of police brutality towards black men and boys, we all should agree that what we look like should not determine our level of innocence, or our expectations of justice. We have it within our power as a society to topple barriers to equal opportunity and treatment, especially for black boys, who often face steep obstacles.

Black boys are not only assets to their communities, they have feelings, too.

CLICK HERE to pledge to see the good in black men and share their stories so that others may do the same.

Thanks for reading. Until next time, I'm Flood the Drummer & I'm Drumming for JUSTICE!™