Even if you don't track news from the "apocalypse beat" closely, the lexicon of climate science and policy is probably familiar: carbon footprint, carbon budget, two-degree scenario, CO2 equivalent, ocean acidification, sea-level rise. But here's a term you may not know so well, which needs to come up a lot more often than it does now if we're serious about taking "urgent action to combat climate change and its impacts": short-lived climate pollutants.

No, it doesn't exactly roll off the tongue. But whether we get control of SLCPs -- mainly soot (more precisely, black carbon), methane, and hydrofluorocarbons (HFCs) emitted from sources like diesel engines, brick kilns, cookstoves, gas and oil wells, municipal landfills, air conditioners -- in the near term will do a lot to determine whether we get control of global warming in the long term. Here's why.

In climate change, the overall rise in earth's temperature is, obviously, important. But so is the rate at which that temperature rise happens. Slowing the rate of change gives us badly needed time to work: time to develop and deploy green technologies, to devise and build more energy-efficient infrastructure, to transition to a low-carbon economy. Slowing the rate of global warming is one of the most important immediate problems for climate policy. And we probably can't do it if we don't act quickly on SLCP emissions.

Molecule for molecule, SLCPs are many times more efficient than CO2 at absorbing solar radiation. But their lifetime in the atmosphere is much shorter; hence their name. Generally SLCPs persist in the atmosphere for less than 15 years, compared to hundreds of years for CO2. A ton of methane released into the atmosphere will have caused 84 times more warming than a ton of CO2 after 20 years, a ton of HFCs 3,700 times more, and a ton of black carbon (second only to CO2 in total climate impact) 3,200 times more. Keep that ton of soot or methane out of the atmosphere, and you front-load a climate benefit, so to speak.

So getting control of SLCPs could have an immense short-term effect on average global temperature -- that is, an immense effect on the rate of increase. How immense? As much as half a degree Celsius over the next 35 years, which is a lot in the context of an effort to limit the overall temperature rise to two degrees Celsius by the end of this century.

And here's the other thing that distinguishes SLCPs from CO2: we have the technology, today, to virtually eliminate human-caused emissions of methane, black carbon, and HFCs. We could do it fairly quickly, and it wouldn't cost very much, relatively speaking.

A growing number of people and organizations are taking up the challenge. The most prominent is the Climate and Clean Air Coalition to Reduce Short-Lived Climate Pollutants (CCAC), a partnership of well more than 100 national governments, nongovernmental organizations, private enterprises, and civil-society institutions. (Full disclosure: My organization, the International Council on Clean Transportation, is a partner in the CCAC). 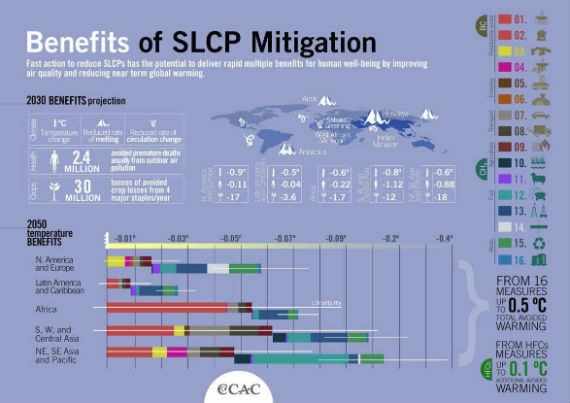 One of the CCAC's successful projects is the Heavy Duty Diesel Initiative, which aims to reduce black-carbon emissions from diesel engines. The transportation sector is responsible for around one-fifth of black-carbon emissions worldwide (the bulk of that coming from heavy-duty diesel engines on trucks and marine vessels). Installing a simple, low-cost particulate filter can trap nearly all the soot in diesel exhaust, yet this year 72% of heavy-duty vehicles sold around the world did not come equipped with such a filter.

The CCAC's Diesel Initiative takes a three-pronged approach. First, focus on getting strong emissions regulations and complementary policies in markets, such as Mexico and China, where high-emitting trucks and engines are still the norm. Emissions standards are the most effective way to ensure that new diesel engines come equipped with diesel-particulate filters (DPFs). Second, focus on lowering sulfur content in fuel. Low-sulfur diesel produces fewer particulates to begin with, and it helps DPFs operate most effectively. In the U.S. and Europe, diesel-fuel sulfur content is limited to 10-15 parts per million; in much of the world, on-road diesel fuel can contain more than 500 ppm, and marine-bunker fuel for ships may be as high as 35,000 ppm. Third, focus on sectors like ports, urban buses, and freight, where maximum impact can be obtained by developing specialized strategies and working directly with stakeholders (such as port authorities, bus fleets, and freight carriers).

The three-pronged Diesel Initiative is just one part of the many-faceted approach mapped out by the CCAC to attack short-lived climate-pollutant emissions from the most significant and reachable sources with proven technologies and practical solutions. It's an ambitious partnership, and a promising one. Which is good, because a lot depends on it.

This post is part of a series produced by The Huffington Post, "What's Working: Sustainable Development Goals," in conjunction with the United Nations' Sustainable Development Goals (SDGs). The proposed set of milestones will be the subject of discussion at the UN General Assembly meeting on Sept. 25-27, 2015 in New York. The goals, which will replace the UN's Millennium Development Goals (2000-2015), cover 17 key areas of development -- including poverty, hunger, health, education, and gender equality, among many others. As part of The Huffington Post's commitment to solutions-oriented journalism, this What's Working SDG blog series will focus on one goal every weekday in September. This post addresses Goal 13.