A quick internet search of “American cowboy” yields a predictable crop of images. Husky men with weathered expressions can be seen galloping on horseback. They’re often dressed in denim or plaid, with a bandana tied ‘round their neck and a cowboy hat perched atop their head. Lassos are likely being swung overhead. And yes, they’re all white.

Contrary to what the homogenous imagery depicted by Hollywood and history books would lead you to believe, cowboys of color have had a substantial presence on the Western frontier since the 1500s. In fact, the word “cowboy” is believed by some to have emerged as a derogatory term used to describe Black cowhands.

An ongoing photography exhibition at the Studio Museum in Harlem celebrates the legacy of the “Black Cowboy” while chronicling the unlikely places around the country where cowboy culture thrives today. Through their photographs, artists like Brad Trent, Deanna Lawson and Ron Tarver work to retire the persistent myth that equates cowboys with whiteness.

In the 1870s and ’80s, the Village Voice reports, approximately 25 percent of the 35,000 cowboys on the Western Frontier were black. And yet the majority of their legacy has been whitewashed and written over.

One notable example of this erasure manifests in the story of Bass Reeves, a slave in Arkansas in the 19th century who later became a deputy U.S. marshal, known for his ace detective skills and bombastic style. (He often disguised himself in costume to fool felons and passed out silver dollars as a calling card.) Some have speculated that Reeves was the inspiration for the fictional Lone Ranger character.

Most people remain unaware of the black cowboy’s storied, and fundamentally patriotic, past. “When I moved to the East Coast, I was amazed that people had never heard of or didn’t know there were black cowboys,” photographer Ron Tarver said in an interview with The Duncan Banner. “It was a story I wanted to tell for a long time.”

In 2013 Tarver set out to document black cowboy culture, in part as a tribute to his grandfather, a cowboy in Oklahoma in the 1940s. “He worked on a ranch and drove cattle from near Braggs to Catoosa.” Another artist, Brad Trent, shot striking black-and-white portraits of members of the Federation of Black Cowboys in Queens, New York, an organization devoted to telling the true story of black cowboys’ heritage while providing educational opportunities for local youth to learn from the values and traditions of cowboy life.

Kesha Morse, the FBC president, described their mission as using “the uniqueness of horses as a way to reach inner-city children and expose them to more than what they are exposed to in their communities.”

Trent’s images capture how much has changed for black cowboys, who now dwell not only on the Western Front but on the city streets of New York and in rodeos held in state prisons. Yet certain values of cowboy culture remain intact. For Morse, it’s the importance of patience, kindness and tolerance.

We would add: and a very cool hat. 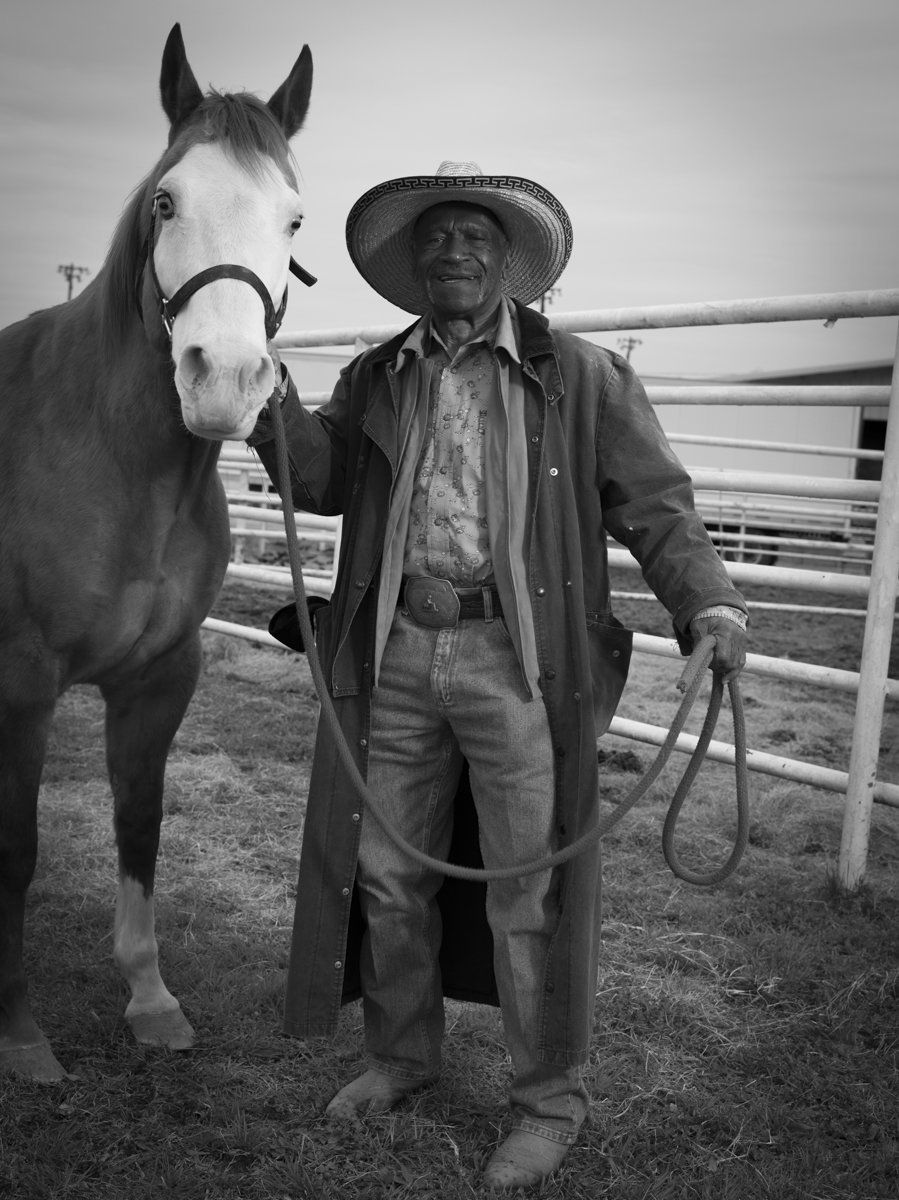