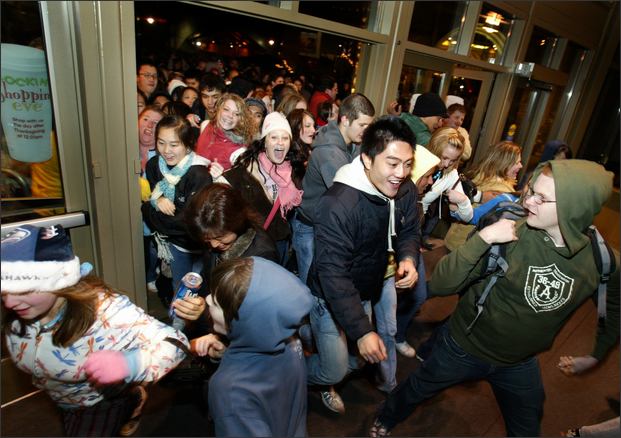 I don't come from a family of traditions. Growing up Jewish-ish, we often forgot to light the candles on the menorah for Hanukkah, I would receive one big gift instead of the traditional eight little ones, and we decorated our completely secular Christmas tree with a spray of awkward homemade ornaments. While most families sang Christmas carols, baked holiday cookies, or gathered at Grandma Helen's for dinner together, we avoided warbling off-key songs, bought our cookies at the local bakery and ate off of TV trays while staring at the television. But the one tradition that we do have, the only tradition in fact, is Black Friday shopping.

For every Thanksgiving day that I have stuffed my face with succulent turkey and pumpkin pie, there has been a five am wake-up call provided by my mother in order to begin the wonderfully stressful day of Black Friday shopping. When I was in elementary school, I would stumble into the car, slump in the backseat and pass out on the way to the mall. Determined to score every sale possible, my Mother, her twenty pound purse jammed with coupons, would make sure that we were one of the first shoppers to cross the threshold. Typically I would wander around the Macy's in Menlo Mall until I found a circular clothing rack, crawl underneath to the center and nap until my mother's nasal trill would wake me from my awkward resting spot. Due to my young age I could not fully appreciate the sales, the wonderful clothes, or even the potential bonding with my Mother that Black Friday shopping offered.

What initially started as a day for my Mother and I, quickly branched out to invite more female family members. After my Poppy died, my Grandmother joined us for the holidays and accompanied us to the mall for our shopping day. Not wanting to be left out, my Florida Aunt drove up to New Jersey with Uncle Joe and dog in tow. That same year I invited my best friend to join in our day long shopping spree. We would be stuffed in the backseat of my Mother's uncomfortable station wagon along with my Aunt, while my elderly Grandmother sat in the front seat offering shopping advice. "Don't accept the initial price," she lectured, "You can always get it cheaper somewhere else if you look." She knew from experience; one year when we altered our normal shopping routine by going to the Short Hills mall, my Grandmother breezed into Tiffany's, schmoozed the store clerk, and bagged herself a two hundred dollar discount. Knowing how to barter, while still remaining charming on such a stressful day, can help you land that deal that for which you have been searching.

While my best friend and I would wander into Delia's and Express to shop for ourselves, my Aunt would take off for some serious Christmas shopping, and my Mom and Grandmother would waddle around the mall, coupons in their clenched fists, a mental list of "door-buster" sales to hit first. We would all meet at the food court at lunch time, resting our feet and comparing purchases. One year my Aunt bought us all tree shaped bejeweled pins, to show our membership in the "Black Friday Shopping Club." They were terribly tacky, and being a dramatic, easily embarrassed teen, I stashed my pin away, with no desire to ever don such a blight.

Years passed and so did my Grandma. At the Black Friday following her passing, it was slightly harder to get going, but I managed to guilt my Mother into going, by reminding her I would be at college the following year, and "who knows if I'd be around or not to go shopping." Even though we both knew it was an empty threat, it worked, and we all shopped until our feet bled and our credit cards cried.

Black Friday will forever be men free. The one year we relented and allowed my father and uncle to join in the shopping revelry, they lost their nerve in less than an hour, fleeing like cockroaches from the light. And while my boyfriend is what they call a "real trouper," accompanying me to outlet malls and trips to the store "just to browse," I refuse him entrance to Black Friday Shopping. It would make life easier to have someone to carry my bags and tell me how gorgeous I look in whatever I happen to have shimmied into, but I love him far too much to have him endure the insanity of women fighting over Uggs and throwing clipped internet coupons at sales clerks.

Even during college and since I graduated, I made sure to be home, not only for the High School "homecoming" where we'd gather at the local Sun Tavern to run into people that we didn't really speak to anymore, and not only to go to Thanksgiving buffet dinner at the near-by upscale hotel, but mainly for the shopping on that Friday morn. With Grandma gone, and my Aunt sporadically showing up for Thanksgiving, the "Black Friday Shopping Club" was reduced to three members. My best friend and I would figure out our game plan for weeks before; what we were specifically looking for, what stores had the best deals, and how we could optimize our quantity of shopping for the day. My mother had aged, thus slowing her pace, so we would take off without her once we reached the mall, meeting her later, like always, at the food court at lunch time. And while she only could stay for a few hours on those days, unable to keep up with the frantic pace of the mall because of her stiff arthritic knees, we still would boast to each other about our purchases and the unbelievable savings we had scored by getting to those "door-buster" sales.

Now Thanksgiving is looming, and the recession is hastily eating away at my wallet. Grandma has been gone now for six years, my Mom's legs seem weaker than ever, and while my Aunt will be with us this year, my shopping time with best friend will be cut short because she has a wedding that day. With my shopping budget cut by more than half of what I use to spend, and so many important parts of our one tradition fading, Black Friday does not have the same appeal it once did.

I recently found that tacky silver tree pin in my old bedroom at my parent's house. Still in its box, never even unpinned from the fabric backing, it was as shiny and glittery as the day my Aunt gave it to me. While I could not enjoy its campy cheer when I was fourteen, ten years have passed and my appreciation has grown. While I may eventually shop by myself on Black Friday without the other "club members," I will always be able to remember the original shopping camaraderie I felt, as I push though the frantic throngs of shoppers to score those "door-buster" deals.