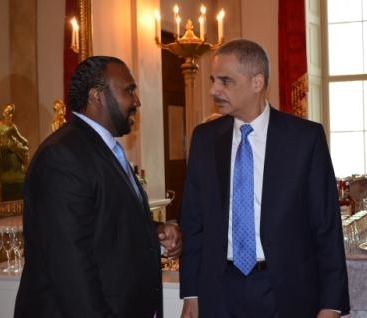 A federal judge's recent ruling has finally settled outstanding issues in the black farmers' long-running lawsuit, nearly 30 years after I first started protesting discrimination by the United States Department of Agriculture, Congress and the Department of Justice U.S. District Court Judge Paul Friedman's recent ruling will put to rest the expectation of compensation that many farmers still hold. Our phone lines ring constantly from black farmers who either have been denied in the lawsuit's adjudication process or believe their applications to join the suit are still pending.

The deadline to join the case passed nearly two years ago, in May 2012. It took decades to reach that date, when the black farmer's bill we lobbied for over several for decades was signed into law on December 8, 2010. I wore out many pairs of shoes on Capitol Hill trying to persuade Congress to pass the Cobell Settlement legislation for $3.4 billion and the black farmers' settlement bill for $1.15 billion.

Because the settlement took decades to resolve many black farmers died waiting for justice. Many of their families are now dealing with heirs' claims. The remaining farmers received a denial letter. The National Black Farmers Association answers every call, but it's a frustrating process, for we have very limited resources and the farmers need and deserve answers.

Judge Friedman's recent decision provides clarity to black farmers who were denied in the settlement process. Read the ruling here.

Sadly, some of those still seeking compensation were the victims of fraud, the kind of scurrilous scams that usually turn up when a person or group receives a windfall. We get calls from black farmers who seem to think they have applied in the settlement process, despite my many warnings about schemers who charged some farmers a $100 fee and pretended to file their claims.

Our work is not finished. Black farmers still face unfair practices and still struggle to gain our rightful place in America's agriculture and food production systems. For example black farmers have yet to supply McDonald's with one egg or slice of lettuce or onion. Black families are welcomed as consumers. We're seen as good enough to purchase a Big Mac or Happy Meal but not good enough to sell to corporate producers. It's a sickening realization. This is an example of discrimination against a group of people. It contributes to the decline of the black farmer as well as loss of land.

With such injustices outstanding, I regret the need to discourage anyone's expectations, but I am obliged to provide the facts of the case. I know and understand that the judge's decision was not what the denied black farmers wanted to hear from the court. But I respect the decision. I and others worked hard and fought long to win payments to deserving black farmers. It is hurtful to know others come along and take advantage of some elderly black farmers who had already endured mistreatment by their own government.

• August 12, 2011 -- Objection deadline and deadline to submit a notice of intent to appear and speak at the fairness hearing.

• September 1, 2011 - Fairness Hearing to hear any objections and decide whether to grant final approval.

• August 2, 2013 -- Computation of settlement payments -- The claims administrator computed the number of approved claims and the amount of the awards to be paid to successful class members and prepared the formal accounting required by the settlement agreement.