For decades black films, actors and directors have made the pilgrimage to the Toronto International Film Festival and they've become an integral part of the "Best Film Festival in the World." This year the footprint black films and artists have left behind is resoundingly deeper, bigger and better than ever before. Especially when you consider that director Steven McQueen's 12 Years a Slave, a graphic and compelling allegory about slavery, has won the festival's prestigious People's Choice Award. 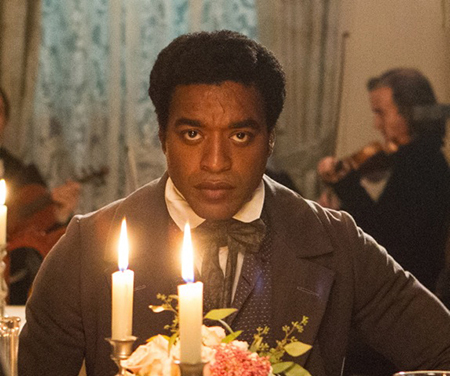 12 Years a Slave (****) When director Steve McQueen (Hunger, Shame) ascertained that there had never been a serious film made about slavery in America, he used the memoirs of Solomon Northup, "12 Years a Slave," as blueprint for developing a painfully realistic allegory that fills that cinematic gap. Northup was a free New York Black man who was hoodwinked and sold into slavery in Washington D.C. in 1841. Chiwetel Ejiofor plays Solomon, Michael Fassbender (Shame) a demonic slave owner, and Lupita Nyong'o is the owner's abused mistress. A perfectly directed, produced and acted film that makes the inferior slave parody Django a distant memory.

1982 (***) Back in the day, the '80s, the crack epidemic swept through the urban black community. In Philadelphia, a mother (Sharon Leal) loses her way and addiction separates her from her loving husband (Hill Harper) and young daughter (Troi Zee). First time filmmaker Tommy Oliver's intimate look at how drugs can destroy a family is thoughtful. Harper's portrayal of a struggling blue-collar dad is his best performance ever. Completely nuanced. Leal is very convincing as his nervous, strung-out wife. Wayne Brady is miscast as a drug dealer.

All Is By My Side (**1/2) Filmmaker John Ridley (screenwriter for 12 Years a Slave), takes on the short-lived life of the enigmatic guitar legend Jimi Hendrix. Unable to secure the rights to Hendrix's music, Ridley's script and musical score skirt the obvious. But at some point you wish André Benjamin (André 3000 from hip-hop duo OutKast), who plays the lead, would break into Purple Haze, but he never does. The film's best feature is its recreation of 1960s New York and England. Ridley depicts Hendrix as a highly dysfunctional man, who is a musical genius. Benjamin's performance transcends, though a stronger actor could have done more.

Belle (***1/2) The biracial daughter of a British Navy Captain in 18th century England is brought up by his dad (Tom Wilkinson) and mom (Emily Watson). She becomes a smart, refined lady (Gugu Mbatha-Raw) encumbered by racial prejudice and the standing she is denied (she can't eat with the family, nor the servants). Though trained to wed nobility, she falls in love with an abolitionist, a son of a preacher man. Themes of race and class in an 18th century setting seem so relevant and timely. Surprisingly romantic, yet very politically astute.

Half of a Yellow Sun (***1/2) Olanna (Thandie Newton) and Kainene (Anika Noni Rose) are unidentical twins sisters, born to well-to-do parents in 1960s Nigeria. The former moves to a city to be near her lover, a radical professor (Chiwetel Ejiofor); the latter moves to a big city to take over her parents thriving business. Both get a rude awakening when war breaks out and their culture, the Igbo, become hunted outcasts as they attempt to secede from Nigeria and form a sovereign nation. Playwright Biyi Bandele marks a brilliant directing debut with the screen adaptation of a novel that explores class and culture with great dignity.

iNumber Number (**1/2) An undercover cop Chili (S'dumo Mtshali) and his partner (Presley Chweneyagae) are cheated out of a reward by their corrupt superior. Don't get mad, get even. Chili infiltrates a cash-in-transit heist gang, looking for a big payday. Things go awry and his friend is taken hostage. Uh oh. A vibrant piece of direction by Donovan Marsh plays out like a TV cop show, with a bent to it. Derivative, but fun.

Mandela: Long Walk to Freedom (***1/2) Based on South African President Nelson Mandela's autobiography, this inspiring film chronicles Mandela's early life and his transition from playboy lawyer to a staunch social activist (Idris Elba) who went from peaceful demonstrations to picking up arms in the fight against apartheid. A stirring bio-film. Unforgettable. Naomie Harris plays Winnie Mandela, warts and all. The most compelling film at the festival, considering Mandela's current ill health. An earthly saint gets his due. Directed by Justin Chadwick (The First Grader).

Can a Song Save Your Life? (**1/2) Gretta (Keira Knightley) is left alone in New York City, when her musician boyfriend (Adam Levine of musical pop group Maroon 5) heads to L.A. with a new mistress. She encounters a down-on-his-luck record producer (Mark Ruffalo), who has been fired by his business partner (Mos Def). The two seek mutual support. From the director of the whimsical musical film Once, John Carney. Once was sweet and melodic. This film lacks that same authenticity and Keira Knightly doesn't have much of a voice.

Don Jon (**1/2) Jon Martello (Joseph Gordon-Levitt) is a strong, handsome, hormone-crazy Jersey Boy with an insatiable libido and a big appetite for pornography. He meets a blonde, Barbara Sugarman (Scarlett Johansson), who breaks his heart. His buddy Bobby (Rob Brown, Treme) helps him keep his head on his shoulders. A crude, "Jersey Shore"-like comedy, directed by Gordon-Levitt.

The Fifth Estate (**1/2) The trafficking of classified information becomes a mainstay for the website WikiLeaks in this dramatic, informative thriller based on the exploits of the site's founder Julian Assange (Benedict Cumberbatch) and his colleague Daniel Domscheit-Berg (Daniel Brühl). By the time Washington D.C. officials (Stanley Tucci, Laura Linney, Anthony Mackie) get a clue, they've been taken to the cleaners. A self-important movie that is as narcissistic as Assange.

Prisoners (***1/2) Viola Davis and Terrence Howard portray parents whose daughter is kidnapped along with the daughter of two neighbors (Hugh Jackman and Maria Bello). The neighbor decides to take matters into his own hands, kidnapping a prime suspect and driving the lead investigator (Jake Gyllenhaal) batty. New twist on an old-type genre movie. Superbly acted, directed (Denis Villeneuve) and scripted with Melissa Leo playing the creepy mom of the creepy suspect (Paul Dano).

August: Osage County (***) Exceptional ensemble cast breathes life into this film adaptation of a Pulitzer Prize- and Tony Award winning 2007 play by Tracy Letts. A dysfunctional rural family has a pleasant alcoholic patriarch (Sam Shepherd) and a mean-mouthed, pill-popping addict matriarch (Meryl Streep). Julia Roberts plays the eldest daughter in a film filled with confrontation that is fueled by vitriol. A dialogue-heavy script and Streep's affected performance make this an imperfect but delicious melodrama.

Gravity (****) This is not a sci-fi movie. This is a drama set in outer space about astronauts (Sandra Bullock, George Clooney) who get broken from their tethers and are hurled into space. The story and characters seem so real you want to reach out and grab their ropes. Oh-so graphic, thanks to Alfonso Cuarón's (Y tu Mama Tambien) ingenious direction. Sandra Bullock's sensitive performance deserves the Academy Award for Best Female Performance. In 3D--you have to see it at an IMAX theater.

The Liberator (Libertador) (***) Epic bio-film based on life of Simón Bolívar, the 19th-century revolutionary who attempted to free Latin America from Spain's tight grip. Bolívar's legendary military campaigns covered twice the territory of Alexander the Great. Édgar Ramírez (Carlos the Jackal) makes a heroic effort portraying a hero. Director Alberto Arvelo makes the most of a monumental task, and keeps the proceedings thoroughly engaging.

Rush (***) Director Ron Howard (Frost/Nixon) re-creates the bitter 1970s rivalry between Formula 1 racecar drivers James Hunt (Chris Hemsworth) and Niki Lauda (Daniel Brühl), who took no prisoners on or off the track. The two alpha males have a relentless drive, pardon the pun, which takes the movie to the finish line, and pardon the metaphor. One is a hard partier the other a cold intellectual. Two very imperfect sportsmen living very different lives.

These films and performances will be in theaters throughout the fall months and into next year. Each is worth a view in its own way. Most represent the highest work by the best talent in the field, particularly artists of African descent.