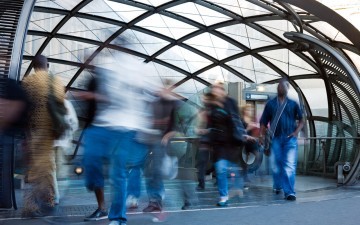 France's Black population, hungry for African-American culture, say they are outraged by an apparent lack of Black hosts for the network's upcoming French broadcasts

When Laure Assembé was 16, she saw Public Enemy perform in Paris. That 1988 concert started a 25-year love affair with Black American culture for the French-Cameroonian woman.

She didn't have BET to learn about the latest hip-hop artists and Black movies. Still, she knew about the network.

"I'm from this generation who use to buy The Source, Ebony and Essence magazines to know about the culture overseas," Assembé said. "We didn't wait for [the] Internet to know about BET."

She'll get a chance to see the network when it debuts in France on November 17. Like its American counterpart, it will be light on music and heavy on television shows. But one thing it won't have are French versions of Bow Wow, Big Tigger, Free or AJ Calloway.

That's because when BET chose its first hosts for its French broadcasts, it apparently overlooked the "Black" in Black Entertainment Television. The first two announced hosts, Hedia Hinges and Raphael Yem, come from MTV and are of Arab and Asian heritage.

The network's choice has caused outrage among the Afro French, like Assembé and others who say they are being cheated of the very thing they would seek from BET.

"BET for us is a symbol of African-American culture," said Christian Dzellat, founder of the magazine Noir et Fier (Black and Proud). "And it has arrived with an Arab and Vietamese host. Can you imagine in the United States a Black television channel without Black hosts? Only in France would someone try to disrespect the Black community like this."

Dzellat is leading a protest movement and boycott that has exploded in French social media, calling the network "hypocrites." The hashtag #boycottBETFrance has garnered international support.

He has made sure that the anger of the digital protest did not dissipate. He and a team of people created a Boycott BET FRANCE Facebook page that currently has more than 5,000 likes, fives times as many as the BET France page. There's even a website counting down the days to the debut of the channel, whose tagline is Black Culture U.S.

Debra Lee, chief executive officer of the network which was sold to Viacom in 2001 by founder Robert Johnson, countered the frustration with a tweet promising there would be Black hosts.

There will be black hosts to represent the diversity in France. https://t.co/giCw2s5IF1

Assembé says she is supporting the protest against BET France, but she also thinks the channel has arrived too late to have any real impact.

"Black people now have their own programs on the Internet because French TV didn't give them what they want," she said. "All the interesting programs for us are on the 'net."

Kiratiana Freelon is a reporter who lives in Rio de Janeiro. Find her on the Internet at kiratiana.com and @kiratiana.