How many remember that this "Black Friday" marks the 10th anniversary of George Bush's famous presidential advisory just after 9/11 for citizens to do their patriotic duty by pushing their worries aside and going shopping? The idea of asking the American people to make sacrifices in the face of the coming "War on Terror" was too '70s, too Jimmy Carter. The 2001 attacks were quickly seized upon by hard-core propagandists and "shock doctrine" advocates as the "new Pearl Harbor," sparking a decade of blatant social-psychological manipulation. The media onslaught has proved sadly effective in getting Americans to support the ongoing series of bloody and bankrupting wars and to overlook the root causes of this violence in today's world. By incessantly pushing on the emotional hot-buttons of fear, hate, greed, false pride and blind loyalty (in that order), warmongers and flim-flam men have, since time immemorial, sought to bring out the worst in human beings. Up to now the propaganda has worked, persuading most Americans to accept with minimal visible coercion the enormous corruption and cruelty at the heart of the corporate-military-industrial-congressional-media complex. I'm embarrassed to admit that I played a small role back in late October 2001 in stoking the national shopping addiction, which worked so well to distract the American citizenry from looking closely at 9/11. At that time, the officially endorsed shopping compulsion served to prevent people from asking questions about how and why the attacks had occurred, and from paying full attention to the horrendously wrongheaded initial responses. These included the mass roundup of innocents; the establishment of indefinite, due process-free, Kafkaesque detention zones at Guantanamo and elsewhere; and the initial conspiracy to go to the "dark side" and resort to systematic torture -- all of which served to morally bankrupt the United States. At that time, Minnesota's Mall of America boasted of being the largest shopping complex in the world. Soon after 9/11, its stores, like others around the country, fell victim to the "Halloween terrorist threat hoax," which mall owners feared, would scare off would-be shoppers. And so, as our FBI office spokesperson, I dutifully participated in a hastily organized press conference instigated by the Mall. I merely spoke the truth at the press conference, assuring the gathered media that the warning that terrorists would target malls in the United States was just a hollow rumor that had gone viral, without any real evidence or intelligence behind it. However, now that I see how American citizens are so routinely manipulated, I regret having contributed even in this small way to encouraging mindless consumption, which Bush, Rove and others pushed to keep people from questioning what they were doing. Stoking people's addiction to shopping is primarily a function of the "greed button," but the tactic also connects to the human frailties of indifference, complacency, false pride and blind loyalty.

If one Googles images of "Black Friday" and "shop until you drop," one finds numerous glossy ads and artistic renderings of pretty women carrying colorful packages and sacks. 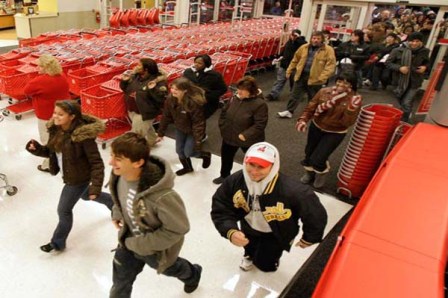 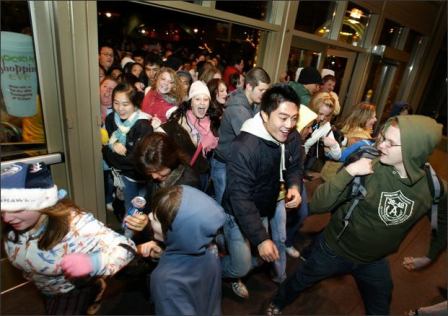 The malls have become like churches, desperately preaching an empty prosperity theology, which holds that purchasing consumer goods made in foreign sweatshops somehow demonstrates God's blessing on American exceptionalism. Only a few dissidents, such as the Church of Stop Shopping Gospel Choir, are able to see that the shopping centers in their glitzy falsity mask true economic despair and spiritual poverty. American consumers largely fail to appreciate the immense irony in America's massive decline in power accompanying their conversion to consumerism. U.S. foreign policy in the post WWII period aimed at essentially enforcing a global system in which the Western powers under American leadership would maintain global dominance. What this essentially meant was being in control of the world's resources at the expense of non-Western nations. This fundamental objective of U.S. foreign policy in the post-war period was candidly admitted in a top-secret report written by then-head of the State Department policy planning staff George Kennan, who wrote in February 1948:

"We have about 50 per cent of the world's wealth, but only 6.3 per cent of its population... Our real task in the coming period is to maintain this position of disparity... To do so we will have to dispense with all sentimentality and day-dreaming... We need not deceive ourselves that we can afford the luxury of altruism... We should cease to talk about vague, unreal objectives such as human rights, the raising of living standards, and democratization. The day is not far off when we will have to deal in straight power concepts."

Reality, however, is going in the opposite direction of the 1948 plans. In 2000, the U.S. controlled 31 percent of the world economy; by 2008, that figure had fallen to 23 percent and, according to the International Monetary Fund, the projection for 2013 is 21 percent. In the past decade, the United States has lost one-third of its economic wealth or, put another way, since 2000, the U.S. has lost nearly a third of its relative power in international politics while China's has doubled and Russia's has tripled. According to economic experts, this decline represents the largest drop in the history books. Our international decline was well under way before the economic downturn of 2008, which further weakened US influence. Whether you believe in "reap what you sow" or what the CIA terms "blowback," the costly Iraq war, growing government debt and myriad unwise decisions resulting in economic weakness have cost the U.S. real power in today's world. In fact, as we face individual and national bankruptcy, the malls have become for many Americans more a place to merely wander and lust than to actually buy. Large segments of the population have lost their jobs, health insurance and homes, and are so deeply in debt that when they surrender to the advertising-bred consumerist urge, they can only window shop, their credit cards rejected if they attempt to buy much of the stuff on display. Martin Luther King Jr. warned that a country in continuous war approaches spiritual death. I wonder if he realized that this extinction would play out in the nation's shopping malls as, like the Romans, we distract ourselves with bread and circuses from the crimes and catastrophes that surround us, and the responsibilities we avoid.

(By Coleen Rowley with editing assistance from Hugh Iglarsh. Rowley is a retired FBI agent and former Minneapolis Division Legal Counsel, also a 9-11 whistleblower. She joined the Church of Stop Shopping before it even was formed. Hugh Iglarsh is a writer/editor/citizen based in Chicago.)