As Black Friday bargain hunters continue to swarm stores across the country in their attempt to snag the best deals, reports have started emerging of shoppers growing violent in the frenzy for discounted wares.

At a Houston-area Walmart on Thursday night, police reportedly intervened after a fight broke out following a scramble for discounted Samsung flatscreen TVs. A video, said to have been taken at the Texas store, shows shoppers lying on top of the TVs on the ground, apparently in an attempt to prevent other people from buying them.

Also on Thursday, sheriff's deputies were called to a Walmart store in Norwalk, California, after two women started fighting over a Barbie doll, according to CBS Los Angeles. At least one of the women is reported to have thrown a punch.

"The whole thing was pretty stupid," a shopper told the news outlet. "That was very dumb."

At a Walmart in Michigan City, Indiana, another video on YouTube allegedly shows people tussling over $88 subwoofers. "Oh my God, that is crazy," one woman can be heard saying in the video as customers scrambled for the electronics.

KTLA reported that three shoppers at a Kohl's store in Tustin, California, were arrested early Friday following a shopping-related altercation. The shoppers included two women and one juvenile, said KABC-TV.

Two shoppers -- a man and his girlfriend -- were also arrested at an Indianapolis mall early Friday after they allegedly attacked an off-duty police officer. WXIN reports that the man had started a fight with another man in the parking lot after being ejected from the mall for being "too rowdy." An off-duty officer then tried to break up the fight, but the man and his girlfriend allegedly attacked him. The two individuals were subsequently arrested.

Elsewhere in the country, bargain hunters lined up for hours to get into their favorite stores. Plenty of "shoving" and general frenzy has been reported. 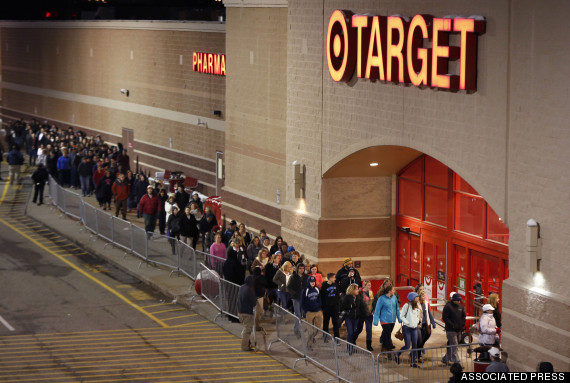 Shoppers head into Target just after their doors opened at midnight on Black Friday in South Portland, Maine. 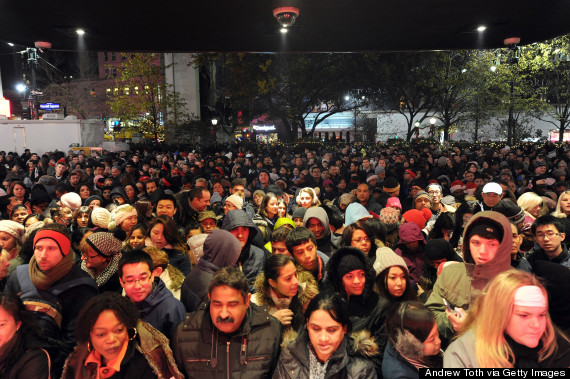 Macy's opens its doors at 6 p.m. for Black Friday in New York City. 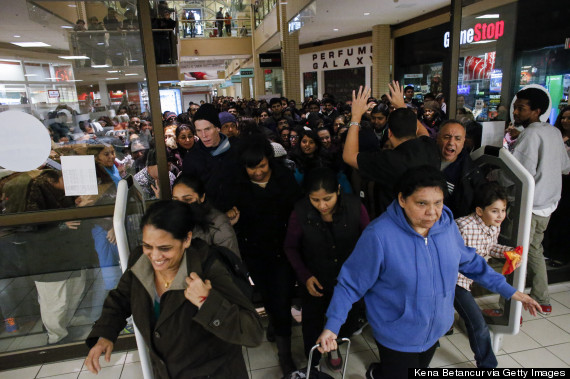 This year, Black Friday brawls have also been reported across the pond in the U.K.

According to the BBC, several people were arrested and some were injured following shopping-related clashes in cities across the U.K. Police had to intervene in stores in London, Cardiff, Glasgow and elsewhere, as customers quarreled over discounted goodies.