Black hair is a beautiful thing.

It can defy gravity, make waves or be elegantly woven. It’s magic.

That’s why Miranda Morowa wanted to show the gorgeous versatility of black hair with the #BlackHairChallenge. Morowa, who runs Melanin Mamis ― a page to help women celebrate themselves ― was inspired by the black hair threads she created. So she thought of the hashtag and tweeted from the page on May 26 to encourage black people to show off the many hairstyles they’ve rocked.

Morowa, who regularly hosts challenges on Twitter for women to participate in, told HuffPost via Twitter direct message that “black hair is the definition of art.” She added, “Dating a Black Girl is like dating 20 different girls. We change our hair so often, it’s super fun & creative. We Slay.”

She isn’t here for the negative stereotypes that some believe about black hair. “Our hair is very unique and we’re blessed to have it,” she said. “As you can see in the #BlackHairChallenge, we can pull off any hairstyle we desire and still look beautiful.”

And the responses reflect that. The hashtag was initially intended for the ladies, she said, but she was pleasantly surprised to see men sharing their photos as the challenge went viral.

From cornrows, weaves and twists to afros, presses and bantu knots, get into this challenge and check out these Twitter users’ photos.

When he say he wanna see different people so you introduce him to Mimi, Lyla, Tiffany, or Coco😛 #BlackHairChallenge pic.twitter.com/uvI83bonzf

If only y'all could 4c the rest of the styles I'm cooking up for this year #blackhairchallenge 😏😆 pic.twitter.com/BowyOKmLsf

Obviously commitment is not in my hair vocabulary 😂 #BlackHairChallenge pic.twitter.com/FgeCk65UXR

I transitioned from perm hair to my natural curls & probably won't look back. #Blackhairchallenge pic.twitter.com/YKgdjFVBWz

Him: I think we should see other ppl
Me:#blackhairchallenge pic.twitter.com/SJ1yOdUtii

#blackhairchallenge I Like To Switch It Up Every Now & Then pic.twitter.com/yA4AsRiWi4

Pop of Culture Twitter Health and Medicine Fashion and Style 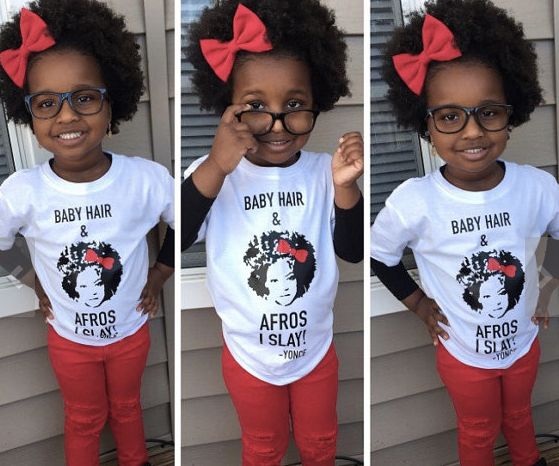 1 / 23
Baby Hair And Afros I Slay T-Shirt
For the Beyonce lover. This T-shirt comes in toddler and youth sizes. <a href="https://www.etsy.com/listing/271536936/baby-hair-and-afros-i-slay-teetoddler?utm_campaign=shopping_us_BigSisLilSisShop_sfc_osa&amp;utm_medium=cpc&amp;utm_source=google&amp;utm_custom1=0&amp;utm_content=10479438&amp;gclid=CPX295Sj4tACFYaNswodRNgB0w" target="_blank">Buy here</a> for $16.
Etsy