Sag Harbor, NY -- The little boys and girls in the old photographs are all grown up now; long gone are the days when they would dig clams in the sand with their toes and chase each other down the length of the beach until the sun sank into the bay.

The summers of their youth were spent with their families here in the traditionally African-American enclaves of Azurest, Ninevah Beach and Sag Harbor Hills, which lie side by side along a bright stretch off Gardiners Bay.

It was an escape from New York City, Philadelphia or wherever home was when it wasn't summer. There was an open-door policy at most of the cottages, which were owned by relatives or by folks who'd known each other so long that they considered themselves relatives. Everyone was a kissing cousin, an uncle or aunt, and every summer was like a family reunion. Extended families included executives, lawyers, entrepreneurs and educators.

"We all went to the same beaches, the same parties. We were family," said Joanne Carter, 74, who started summering here with her family when she was 14, and raised three children doing the same. "The nice thing, it being in an all African-American community, was that a lot of the kids that were raised in some of the wealthier black families, who were raised mostly with Caucasian children, this was an opportunity for them to reconnect with their roots over the summer."

Middle-class blacks, many from Brooklyn and Queens, bought vacation properties here in waves, beginning in the 1930s, during a time when they were legally or socially restricted from doing so in most other areas of the country.

"It was a safe place," she said, where they all could just be.

But for the first time in more than 70 years, when the first cottages went up in Azurest, this tradition seems to be fading.

As the generations shift and many of the older residents pass on or retire and migrate back down South, those in line to carry on the legacy -- now in their 30s or early 40s -- are often unable or unwilling to take up these homesteads. They have gone off to college, started careers and families elsewhere. Often they can't handle the financial burden or would rather cash in on properties whose values have ballooned as much as ten times in some cases. Or they find no need for self-segregation, believing the whole world, even that of the white and the wealthy, has opened up for them in ways their forebears never could have imagined.

Meanwhile, more non-black home buyers are flocking to the area, looking for a deal as the rest of the Hamptons has grown increasingly out of reach. Aggressive real estate agents without traditional ties to the area finally see "value" in a section of Sag Harbor that had long been devalued by outsiders. The soured economy and foreclosure crisis has hastened the turnover. 'For Sale' signs have sprouted, something unheard of in a place where for generations homes had been kept mostly "in the family."

"Life has changed since the '60s to the '90s," said Dianne McMillan Brannen, a real estate agent who lives in Ninevah Beach and married into one of the longtime black families there.

As of late July, as many as 20 homes were for sale in the area, according to McMillan Brannen, by far the most on the open market as many longtime residents could remember.

"There are kind of contending forces in the Sag Harbor area. There is a strong tradition of trying to hold on to those properties. There is a kind of insiders' real estate market where folks, I think, do attempt to first of all keep property inside of a family; if not, have them sold to somebody that they know or that there is some connection to," said Craig Williams, 43, whose family began coming out to Sag Harbor in the 1960s from Teaneck, New Jersey. "Then there is also a trend from the youth point of view, the succeeding generation ... that is looking to have the freedom to do what they want: either cash in on the property to do other things, or venture outside of the campus, if you will."

Williams, who lives in Philadelphia with his wife and 2-year-old daughter, recently purchased property and built a second home in nearby East Hampton, opting for his dream space over traditional boundaries.

"I think her Hamptons experience will be different than mine. Ultimately, I think it will be for the better," Williams said of his daughter. "The sense of freedom to be able to enjoy everything that the region has to offer is as enriching as that kind of isolated experience, that sense of having that enclave that's entirely our own."

There are 480 homes in the three developments: 300 in Sag Harbor Hills, 100 in Azurest and 80 in Ninevah Beach. Today, about 30 percent of the residents of these developments are not black, local real estate agents estimated, up dramatically from decades past when you'd have been hard-pressed to find a single white face on these private beaches.

Some have called it gentrification, a term scoffed at by homeowners here, given the term's association with urban blight, poverty and the notion of whites rescuing and resurrecting a place broken by poor minorities.

"It's not gentrification," said Kathy Tucker, 86, a longtime resident of nearby Eastville, an early home to black whalers who worked on ships that came to port in Sag Harbor. Eastville became an early feeder community to the black beach communities. "There have always been gentry here," she said.

Indeed, the restaurateur B. Smith lives here. So does Earl Graves, the magazine publisher, and Susan L. Taylor, former editor-in-chief of Essence magazine. Colin Powell summered here in his youth, as did Lena Horne and Langston Hughes. And before he passed away, the lawyer Johnny Cochran had a home here.

"This was never a struggling, derelict community," said Leslie Edwards, another local real estate agent. "The demographics are still upscale," she said, a blend of old and new money.

William Pickens IV, 41, whose great-grandfather was the first to establish roots in Sag Harbor, said that the reason for the influx of new residents is a simple one.

"White people are coming in because blacks can't afford this lifestyle anymore," said Pickens, sitting on a bench on a swath of beachfront property owned by his family in Sag Harbor Hills. "But my family has been here since day one. We're not going anywhere."

"I don't know what life would be like without this place," he said.

Most people shared the common rituals of summer time here, where the roads weren't paved and street lights didn't go up until the early 1980s; getting the family car stuck in the dirt was an annual rite of passage. There were parties and picnics and seafood fests with steamed mussels and clams. And of course, there was summer love. Pickens' parents met in 1962 on the beach. "She was striking, walking along the beach in an orange bathing suit, an orange scarf on her head and sunglasses," the elder Pickens, William Pickens III recalled.

But life as he and so many others have known it is changing, if ever so slightly.

The annual fish fry has been cancelled for the third year in a row. In years past, the matriarchs of the families would fry the fish and make the potato salad and other fixings. But these days they can't muster enough volunteers to pull it off. And catering has gotten too expensive.

The old St. David A.M.E. Zion church in Eastville, founded 171 years ago by African-American and Native American whalers, has been alternately leased to other congregations or shuttered because of the area's aging and shrinking black population.

"There was a cultural shift in Sag Harbor and the congregation aged out," Pastor Tom Macleod, a minister in Sag Harbor told the Sag Harbor Express in April. He said the year-round African-American population has decreased in recent years and that "more gentrification in Eastville" has priced many blacks out.

And the Labor Day footraces held each year down by the Pickens place, which have gone on for decades, has seen fewer and fewer children participating.

"It's a new world out here," Pickens said, ambling down a path toward the beach.

In his book "Sag Harbor," author Colson Whitehead, who spent the summers of his youth coming out here, chronicled Sag Harbor's changes during the 1980s, documenting it through music, as disco faded into hip-hop, and the coming-of-age of his protagonist, Benji.

"It's already not what it was," Whitehead said one recent evening after a talk and book signing at a local library. "The traditions will stay as long as people keep them alive," he reasoned. "But real estate in this area trumps everything else."

Back in Sag Harbor Hills, a few blocks from where Pickens stood on the beach, his father, William Pickens III, stood in the living room of his home, regarding a portrait of his grandfather, Dr. William Pickens Sr., who in 1904 became one of the earliest black graduates of Yale University. He came to Sag Harbor in the early 1930s and laid roots that would stretch four generations.

"For black people all during the first half of the 20th century, there were only three or four places to go like this all over the country," said William Pickens III, a former corporate executive and a local historian. There's Oak Bluff in Martha's Vineyard, Atlantic Beach in South Carolina, Highland Beach in Maryland, he said. But there has never been anything like the communities in Sag Harbor.

"While I'm not happy to see the changes happening, I understand the how and why. Market forces are market forces," Pickens said. "But what we are trying to do is encourage young prosperous black folks to take a good look at this place, to come in and compete for this property," he said. "This is precious land, and we intend to keep as much of it as we can." 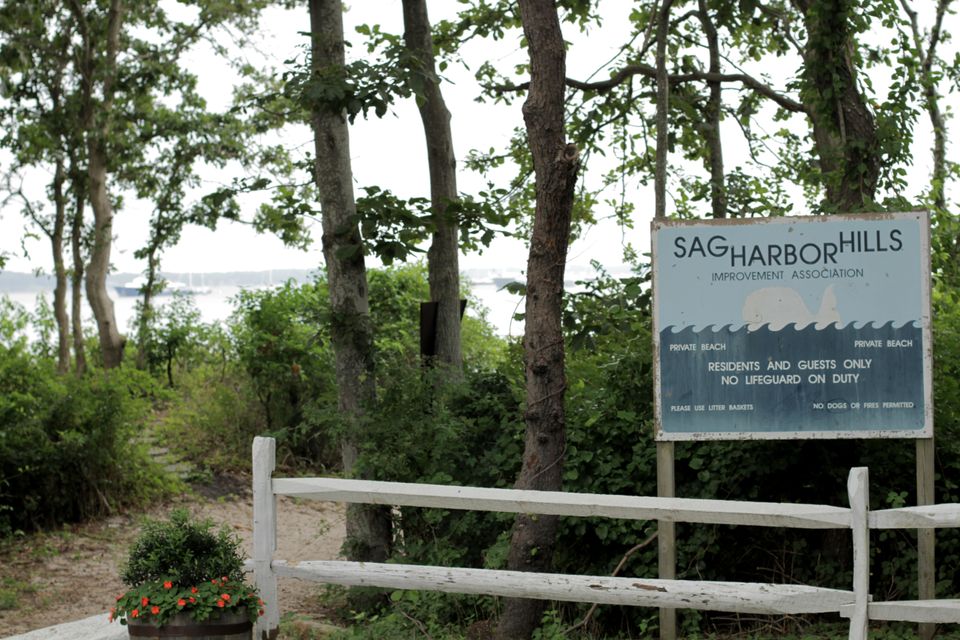