For many, Black History Month is a month of celebration, recognition, and reflection.

At the United Domestic Workers of America (UDW)--a California homecare union comprised of more than 66,000 in-home care workers--we celebrate Black history because it is our history.

What do I mean by that? For starters, Black history is labor history. The workers' rights and civil rights movements have been inextricably linked since their beginnings.

Dr. Martin Luther King, Jr., for instance, saw the importance of recognizing the shared struggles of both movements and working to further them both. The day before he was tragically assassinated, he delivered his famous "I've Been to the Mountaintop" speech at a rally in Memphis in support of AFSCME sanitation workers. And A. Philip Randolph, president of the Brotherhood of Sleeping Car Porters throughout the first half of the 20th century, was integral to both the labor movement and civil rights, leading over 200,000 people in the historic 1963 March on Washington.

But Black history isn't just labor history--it is also homecare worker history. UDW was founded in 1979 by Black leaders under the guidance of legendary farm workers leader Cesar Chavez, and was the second labor union in the nation to be founded by African-Americans.

For those who don't think it's important to have an entire month dedicated to the history of Black people in this country, who think that the racism we experienced "back then" no longer exists or impacts us, let me tell you something: Our members, who provide quality care to seniors and people with disabilities so that they can stay in their homes and out of institutions, have been denied basic labor protections for over 75 years because of Jim Crow-era racism.

It all started with the creation of the Fair Labor Standards Act (FLSA), labor laws enacted in the 1930s to protect working Americans by granting them overtime pay, a guaranteed minimum wage, and more. But because some Southern lawmakers back then were uncomfortable with the idea of domestic workers and farm laborers (who were mostly women and people of color) getting the same rights as white workers, both groups were excluded from the FLSA.

Then, in 2013, the Department of Labor under the Obama administration righted this decades-long wrong by amending the FLSA to include in-home care workers for the first time ever. But just days before the new laws were to go into effect earlier this year, a federal judge threw out the DOL's decision. Here in California, Governor Jerry Brown immediately nixed plans to give homecare workers labor protections like the right to overtime pay.

The court ruling is a serious setback for progress and it means that in some parts of the country, caregivers do not even have a right to a minimum wage. In California, we are fighting back against the governor's decision to halt the implementation of these basic rights, and across the country domestic workers and in-home care workers are uniting to fight for basic protections like overtime pay and a minimum wage. We are hopeful that Governor Jerry Brown will do the right thing by caregivers in California, and that the federal court ruling will be overturned by a higher court.

Caregivers are still overwhelmingly women and people of color, and their work continues to be devalued. In California, most homecare workers make just $10/hour, have no paid sick leave or vacation, have no access to retirement plans, and can barely afford to put food on the table for their families, let alone pay for luxuries like health insurance. This should not be the case in 2015. 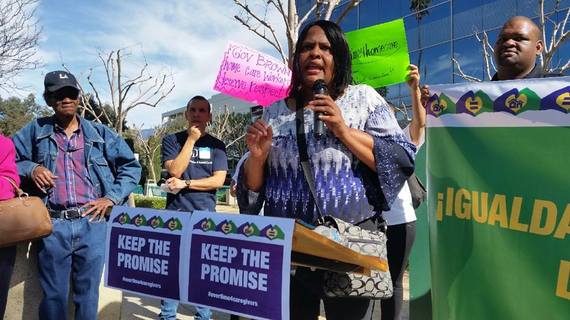 That's why we're standing up for these and other rights, and why we've launched a statewide campaign called #overtime4caregivers. Homecare workers are staging daily vigils at Jerry Brown's office, rallying at the Department of Labor's offices throughout California, sharing an online petition to the governor--all in the effort to win rights they should have gotten decades ago.

This Black History Month, let's celebrate and honor Black history by recognizing and committing to all of the work we have still to do. No one is equal until we are all equal.