Astronomers have discovered a truly colossal black hole. It's 12 billion times as massive as our sun and about 3,000 times the size of the black hole at the center of our galaxy. What's more, the distant hole appears to have ballooned to its supermassive size very early in the universe's history -- just 900 million years after the Big Bang -- and that's got astronomers baffled.

Black holes should take billions of years to get that big, according to current theories, and there are theoretical limits on how fast they can grow. So the existence of the newfound monster is raising serious questions about how black holes evolve.

"The discovery of this record-breaking monster black hole ... raises an embarrassing unanswered question: how did it form?" Dr. Max Tegmark, a MIT cosmologist who was not involved in the discovery, told The Huffington Post in an email. "If it started out as a collapsing star, then this black hole ate about a billion times its birth weight to get this heavy: how did it manage to eat so much in so little time?" 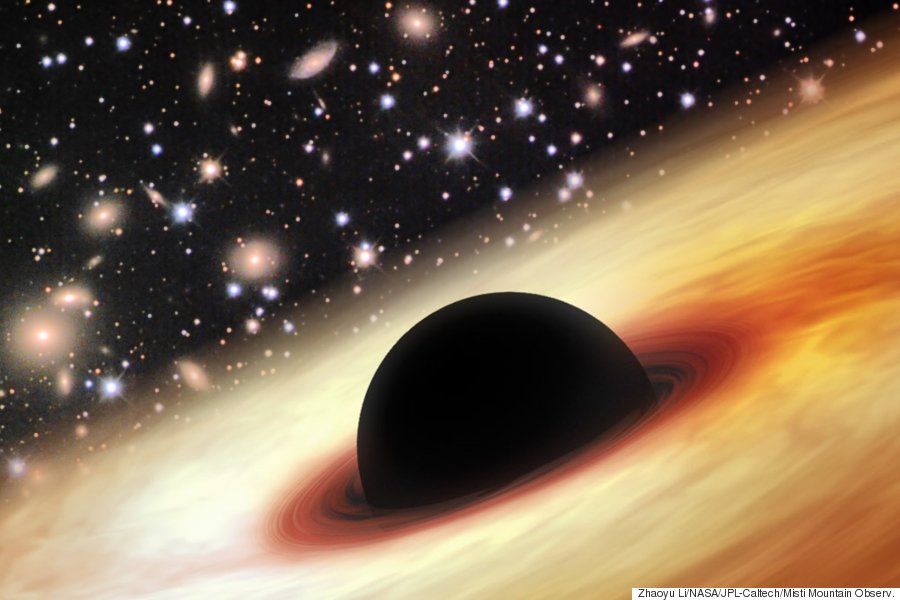 Artist's impression of a quasar with a supermassive black hole in the distant universe.

The black hole lies at the center of a bright cloud of material, a celestial object known as a quasar, called SDSS J0100+2802. This object is located 12.8 billion light-years from Earth and is 420 trillion times brighter than the sun.

The quasar was spotted by a team of researchers using the Lijiang Telescope in Yunnan, China -- and the mass and distance of the black hole were confirmed by observations made with telescopes in Arizona, Hawaii, and Chile. Though black holes can't be seen directly, astronomers can infer their existence and size based on observations of the matter falling into them.

The researchers hope that further observations of the quasar, using the Hubble Space Telescope and Chandra X-Ray Telescope, will shed new light on the formation of black holes and galaxies in the early universe.

"This quasar is very unique," co-researcher Dr. Xue-Bing Wu, an astronomy professor at Peking University and the associate director of the Kavli Institute of Astronomy and Astrophysics, said in the statement. "Just like the brightest lighthouse in the distant universe, its glowing light will help us to probe more about the early universe." 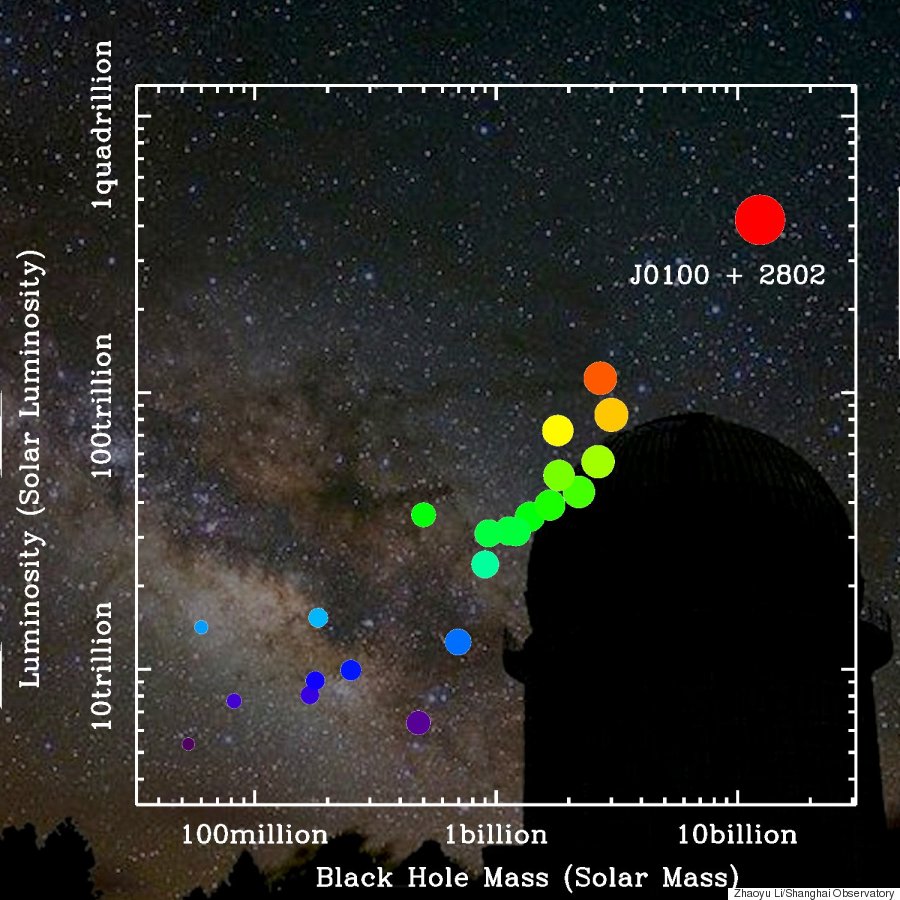 The newly discovered quasar, SDSS J0100+2802, is the one with the most massive black hole and the highest luminosity among all known distant quasars. The background photo, provided by Yunnan Observatory, shows the dome of the 2.4-meter telescope and the sky above it.

The research was published online Feb. 25 in the journal Nature.

This Colossal Black Hole Is 12 Billion Times As Massive As The Sun, And It Has Astronomers Baffled
Best Space Images Of 2014

1 / 29
A powerful X-class solar flare, one of three X-class flares unleashed by the sun on June 10 and 11, as seen by NASA's Solar Dynamics Observatory. X-class flares are the most powerful kind.
Goddard Space Flight Center/AP