The most detailed observations to date of the material surrounding a gigantic black hole have surprised scientists, who say what they see conflicts with common theories about these powerful objects.

Astronomers used the European Southern Observatory's Very Large Telescope Interferometer in Chile to observe the dust around the supermassive black hole at the center of the NGC 3783 galaxy, which lies tens of millions of light-years away in the constellation Centaurus. The black hole, like many at the centers of galaxies, is gorging on a feast of mass that's fallen toward it from the surrounding area. As the dust falls in, it releases powerful radiation that can be spotted from across the universe.

When observing NGC 3783's center, the researchers expected to find almost all of the dust in the shape of a doughnut orbiting the black hole, but instead found significant amounts of material above and below the doughnut, or torus, shape. [Images: How Magnetic Fields Shape Black Holes]

The dust inside the doughnut is hot, reaching temperatures of 1,300 to 1,800 degrees Fahrenheit (700 to 1,000 degrees Celsius), but the dust that's been blown away has cooled down, the astronomers reported. A paper detailing the findings was published today (June 20) in the Astrophysical Journal by lead author Sebastian Hönig of the University of California, Santa Barbara and Christian-Albrechts-Universität zu Kiel in Germany, and his colleagues. 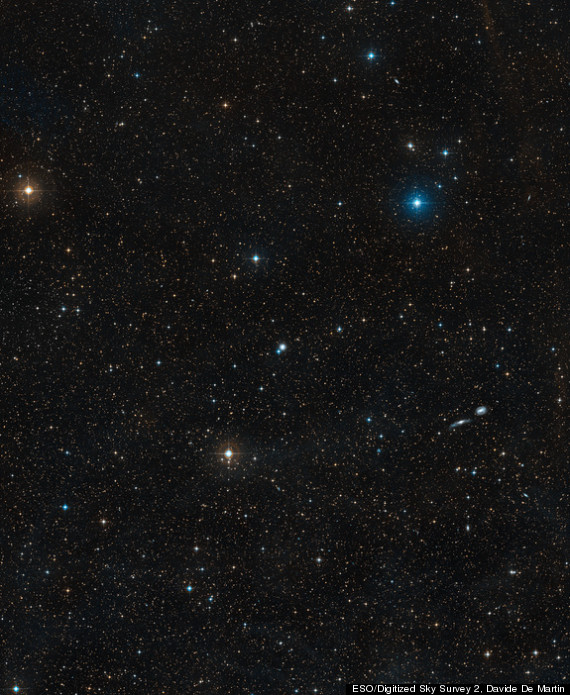 This image shows the region of sky around the active galaxy NGC 3783 in the southern constellation of Centaurus (The Centaur). The galaxy is the face-on spiral right at the center. Image released on June 20, 2013.

These observations suggest that the intense radiation produced when black holes feed on surrounding material also pushes some of this material outward. The discovery could lead to a "paradigm shift" in the understanding of how active supermassive black holes like this operate, scientists with the European Southern Observatory wrote in a statement.

Astronomers hope to use this new knowledge to piece together a fuller picture of how black holes evolve within galaxies.

"I am now really looking forward to Matisse, which will allow us to combine all four VLT Unit Telescopes at once and observe simultaneously in the near- and mid-infrared — giving us much more detailed data," Hönig said.

Solar System In Black And White