Scientists using three telescopes spaced thousands of miles apart have caught the best look ever of the center of a distant quasar, an ultra-bright galaxy with a giant black hole at its core.

By linking powerful radio telescopes in Chile, Arizona and Hawaii together, astronomers created a deep-space observing system with 2 million times sharper vision than the human eye, which gave them the most detailed direct view ever of a supermassive black hole inside a galaxy 5 billion light-years from Earth.

The telescopes revealed a fresh look at the quasar 3C 279, a galaxy in the constellation Virgo that scientists classify as a quasar because it shines ultra-bright as massive amounts of material falls into the giant black hole at its core. The black hole is about 1 billion times the mass of the sun, with the linked-up telescopes providing details down to a resolution of 1 light-year or less, researchers said in an announcement today (July 18). 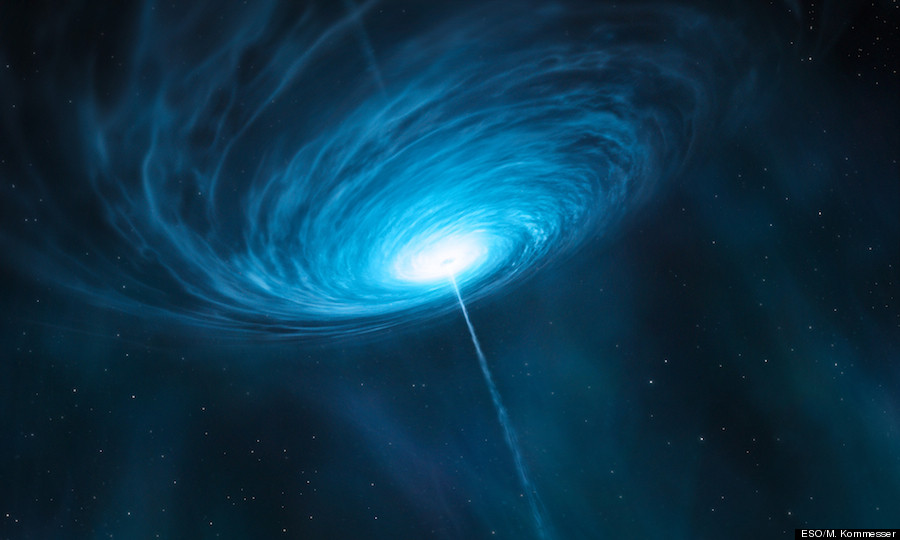 The new view used an astronomy technique called interferometry and marked "a remarkable achievement for a target that is billions of light-years away," researchers with the European Southern Observatory explained in a statement."The observations represent a new milestone towards imaging supermassive black holes and the regions around them."

The European Southern Observatory (ESO) in Chile is home to the Atacama Pathfinder Experiment telescope used in the quasar study. The other two instruments included the Submillimeter Array in Hawaii, and the Submillimeter Telescope in Arizona. [What Does Quasar 3C 279 Really Look Like (Video)]

By linking the three telescopes together, astronomers with ESO, the Onsala Space Observatory and the Max Planck Institute for Radio Astronomy used an observation method called Very Long Baseline Interferometry. 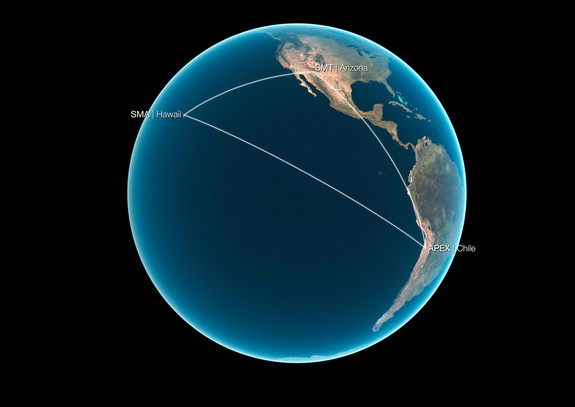 Here's how the interferometry method works:

For the new quasar study, astronomers created a huge triangle of telescopes on Earth using the three different instruments. The distance between the Chile and Hawaii telescopes is 5,870 miles (9,447 kilometers), with the baseline from Chile to Arizona extending across 4,458 miles (7,174 km). The baseline from Arizona back to Hawaii was 2,875 miles (4,627 km).

The telescopes also observed the quasar at extremely short wavelength, making it the shortest wavelength ever observed using such a large baseline array, researchers said.

Altogether, the telescope array was reached a resolution of just 8 billionths of a degree arc in the night sky. For comparison, your closed fist held out at arm's length covers about 10 full degrees in the sky.

ESO officials said the new look at quasar 3C 279 marks a major step forward for an even more ambitious interferometry-based project called the Event Horizon Telescope. That project aims to combine more telescopes to create an even more powerful very long baseline array, one that could ultimately reveal the shadow of the supermassive black hole at the center of our own Milky Way galaxy.

"The shadow — a dark region seen against a brighter background — is caused by the bending of light by the black hole, and would be the first direct observational evidence for the existence of a black hole’s event horizon, the boundary from within which not even light can escape," ESO officials said.