A jackpot of previously unknown black holes across the universe has been discovered by the infrared eyes of a prolific NASA sky-mapping telescope.

The cosmic find comes from data collected by NASA's Wide-field Infrared Survey (WISE) telescope, which scanned the entire sky in infrared light from December 2009 to February 2011. The full catalog of observations by WISE during its mission was publicly released in March, and astronomers are still poring through this celestrial trove for discoveries.

"WISE has found a bonanza of black holes in the universe," astronomer Daniel Stern of NASA's Jet Propulsion Laboratory (JPL) in Pasadena, Calif., said during a news briefing today (Aug. 29). WISE turned up about three times as many black holes as have been found by comparable surveys in visible light, offering up a total of 2.5 million new sources across the sky.

These black holes aren't the average tiny, dense objects created by the collapse of dead stars, but rather humongous "supermassive" black holes that have been caught feasting on matter falling into them. Such active black holes are known as quasars, and are some of the brightest objects in the universe, because of light released by the infalling matter. [Photos: Millions of Black Holes Seen by WISE Telescope]

"We expected that there should be this large population of hidden quasars in the universe, but WISE can now identify them across the sky," Stern said. "We think these quasars are really important for shaping how galaxies look today." 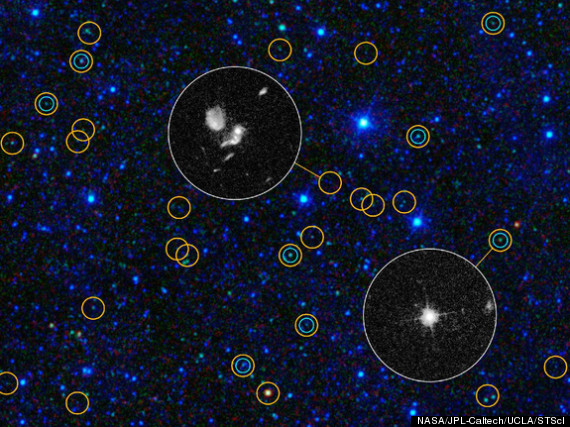 This zoomed-in view of a portion of the all-sky survey from WISE shows a collection of quasar candidates.

In addition to this haul of gorging black holes, WISE has turned up a smaller population of rarer objects researchers are dubbing "hot DOGs," for hot, dust-obscured galaxies.

These galaxies are thought to be extremely bright, but appear very faint to us because their light is shrouded by dust.

"It is actually the most obscured objects in the WISE sky that are among the brightest objects in the universe," said Peter Eisenhardt, a WISE project scientist at JPL. "They're definitely a different type of beast than we’ve seen before."

The hot DOGs observed by WISE number about 1,000, and are mostly spotted from very far away, meaning they existed in the early days of the universe, because their light has taken billions of years to travel to Earth.

Scientists suspect these weird objects may represent a missing link in galaxy evolution, capturing a brief phase in the life of a galaxy that is transitioning from being a spiral disk galaxy like our milky way to what's called an elliptical galaxy.

Astronomers used to think spirals and ellipticals were two wholly separate classes of galaxy, but now researchers are coming to believe they are just two different stages of life. A merger between two colliding galaxies, or some other dynamic process, may transform a spiral into an elliptical.

And that halfway point between the two could perhaps be embodied by hot DOGs, scientists speculate.

"We think we may be seeing these galaxies at a crucial transformational stage," said Rachel Somerville, an astrophysicist at Rutgers University. The Milky Way itself could someday become a hot DOG, she said, after it collides with our neighbor Andromeda, which it is expected to do in about 2 billion years.

Hot DOGs are even more luminous intrinsically than the average quasar, scientists said.

"They may be hosting an extremely powerful supermassive black hole at their center which can heat the dust to high temperatures," said Jingwen Wu, also of JPL. "We may be seeing a rare phase of galactic evolution where dust and gas are heated and ejected by supermassive black holes. This may be a missing link of galaxy evolution."

WISE has now completed its mission and run out of coolant to keep its electronics cold. The telescope's operations were shut down in February 2011, but scientists anticipate many more discoveries are still to come from its observations.