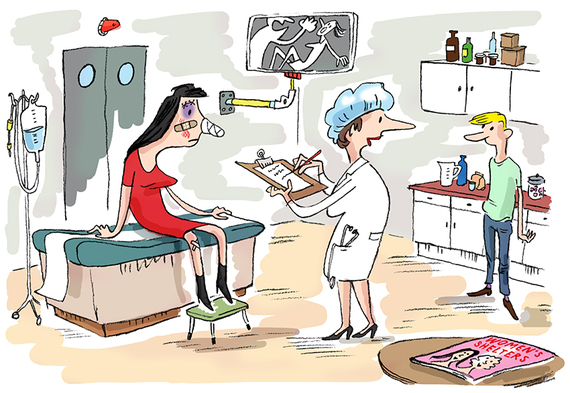 The predicted Snowmaggedon of 2015 never arrived in Princeton, but that does not matter much to me when I find myself sprawling face-down on the parking-lot concrete next to my car. I never even saw the black ice. I just screamed and tasted blood in my mouth after I hit the ground. My whole body hurts.

It could have been much worse, but it was serious enough for my oldest son to drive me to the ER.

"What exactly happened?" asks the triage nurse as she inspects my bruises and chipped front tooth.

"Yes, it was so icy outside," I answered. She looks at me with a raised eyebrow but says nothing.

She makes a note. A moment later the doctor arrives. She also inspects my split upper lip and bruises.

"Were you there?" She asks my son while I am still lying on the gurney, waiting for the surgical adhesive to be put on my lip.

"Where is your father?"

"He's out of town.' She makes another note.

I remember a conversation with a manicurist in the nail salon. She told me that the police visit regularly and brief them how to identify signs of domestic abuse -- giveaways such as bruised arms or blood under the fingernails. If they observe anything suspicious, they are required to notify the police.

Soon it is the Sunday of the Super Bowl and, as always, we go to our neighbors to watch along with the rest of America and fortify ourselves with Buffalo wings, beer and Coke. Opinions are divided about Katy Perry's halftime show. Is it kitsch or art? The Super Bowl is America's Rorschach test.

Suddenly, amid all the feel-good ads that costs $4.5 million for thirty seconds, I see one that gives me chills. A suburban interior, very ordinary. A phone rings.

"Madam, this is 911. If you do not have to report an emergency, please hang up."

"Half Pepperoni, half mushrooms."

"Madam, you understand that you called 911?"

"How long will it take before you get there?"

"Madame" -- the man's voice changes its impatient tone -- "Is this an emergency?"

"And you cannot talk?"

Meanwhile, as they are talking, the camera pans across the living room. A fireplace, a painting above the mantel. Dirty dishes on the counter. Then the camera goes up the stairs. A bedroom, a hole in the wall.

"Is there anyone with you?" The voice is now worried. "Say yes or no."

"Are there any guns in the house?"

"Madam, we'll be right there."

The National Football League, which organizes the Super Bowl, has contributed this public-service ad after suffering a dent in its image. A number of players have been guilty of domestic violence. Ray Rice hit his girlfriend Janay Palmer in an elevator last year and knocked her out. On the surveillance camera we see how he beat her, then looks as if nothing has happened. Then he drags her out like a rag doll. These images went around the world. Ray lost his job, star status, and his regular income.

Like many abused wives, Janay later absolved the behavior of her husband. He is a wonderful man, she said, besides, they had debt. She demanded that he, the breadwinner, get his job back. Janay was fully prepared for her and their 3-year-old daughter to continue to be exposed to the same risks.

With my tongue, I lick my sore lip. I wonder if Janay is watching the Super Bowl.