The black leopards of the Malay Peninsula have remained somewhat of a mystery to scientists. Not only are they rare, but until recently, researchers had trouble tracking the animals because of their seemingly uniform coats. Thanks to a new imaging technique, however, they have confirmed that the animals have spots, meaning they can now count and study leopard populations more accurately.

Researchers with James Cook University in Australia manipulated the nighttime infrared flash on automatic camera traps so that they also fired during daylight hours.

"It was really by accident that we discovered that if you can get that infrared flash to go off in the daytime, you could suddenly see the spots," researcher William Laurance told Agence France-Presse. 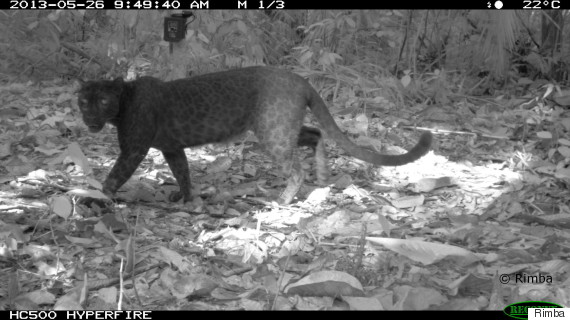 The images they captured revealed that the black leopards have a complex pattern of spots that can't be seen by the human eye. The discovery, which was published in the July issue of the Journal of Wildlife Management, will aid in tracking the animals.

"We found we could accurately identify 94 percent of the animals," study co-author Gopalasamy Reuben Clements said in a press release. "This will allow us to study and monitor this population over time, which is critical for its conservation."

Leopards are found in more parts of the world than other big cats and live in a variety of habitats. Most of the animals have lighter coats with a distinctive spotted pattern, but the Malaysian population is know for melanism, which causes the black coloring.

"This black coat may have made them 'perfect stalkers' in our dimly lit Malaysian jungle and this advantage may have helped them compete with tigers for similar-sized prey," Clements, who also co-founded the Malaysian jungle conservation organization Rimba, told LiveScience.

Using the infrared method, the researchers determined there are about three leopards for every 38.6 square miles in the northeastern portion of Malaysia that lies within the Malay Peninsula. They suspect poaching may be to blame for the lower panther population elsewhere on the peninsula, which also includes portions of southern Myanmar and Thailand.