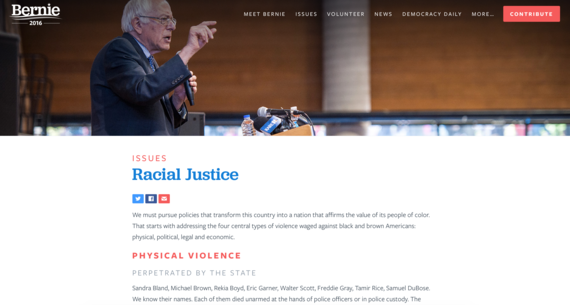 In the 1960s, while a young Hillary Clinton was supporting Republican presidential candidate Barry Goldwater -- an outspoken opponent of civil rights legislation -- in his quest for the presidency, Sanders was leading protests against police brutality and segregated schools and housing, marching in the March on Washington and working as an officer for the Congress of Racial Equality. His voting record while in Congress, first as a Representative (1990-2005) and then as a Senator (2006-Present), has earned him consistently excellent marks from the National Association for the Advancement of Colored People (NAACP). The NAACP has given Sanders 100 percent ratings on its Legislative Report Cards for the entirety of his time in the Senate and near-100 percent or 100 percent ratings during his time in the House for, among many other things, voting in favor of strengthening the Voting Rights Act, anti-discrimination laws, and hate crimes legislation and against the death penalty, stringent sentencing guidelines for those caught up in the criminal justice system, and the welfare reform law of 1996 (the only blip on his record is gun control, an issue on which he admittedly has a mixed voting history, though his stance on the issue is much more sensible than many of his detractors contend).

Because of that excellent record, a number of Sanders supporters have been upset by Black Lives Matter protests targeting Sanders. Sanders' supporters' frustration seems to be borne out of two observations. First, Sanders' passion for economic justice - raising the minimum wage to $15 an hour, breaking up the big banks, making our tax system more progressive, advancing single-payer health care -- is intimately connected with a passion for racial justice. Income, wealth, and opportunity inequality in this country disproportionately affect communities of color, and a commitment to addressing them is in many ways in and of itself indicative of a view that Black Lives Matter.

Second, and relatedly, Sanders has received a disproportionate amount of attention from protesters relative to Hillary Clinton and Republican candidates, who have almost-uniformly worse records and stances (the one exception may be Clinton on gun control) on issues affecting Black Americans (in fact, Sanders has what is by far the best record of any prominent candidate on civil and human rights across the board; he has long been a strong ally on issues affecting Latinos, the LGBT community, women, and poor people around the world). Sanders supporters wonder why Black Lives Matter is applying pressure primarily to the candidate most sympathetic to their cause.

I myself am a strong Sanders supporter and find these observations relevant, but they miss a few crucial points. For one thing, while racial and economic justice are intimately connected, they are not the exact same thing. As Jennifer Roesch puts it in an excellent article for Jacobin:

It is certainly true that the struggle against racism today must entail a radical program of economic demands...It is also clear that such reforms would benefit the entire working class and reduce income inequality. But such demands cannot be delinked from, or stand in the place of, explicit demands around racism...

Fighting economic inequality is insufficient -- any challenge to capital has to be coupled with race-specific demands for reform. Jobs programs would have to include affirmative-action policies and a prohibition on discrimination on the basis of a criminal record; fights to expand funding for public hospitals, schools, and services would have to recognize the specific needs of black communities hollowed out by decades of deindustrialization and neglect; and housing policies would need to explicitly target practices such as redlining and predatory lending.

The crisis faced by black America is also not solely economic -- it is also a social crisis. Mass incarceration, police violence, and resegregation have devastated black communities...

This fight will require forging a unity not by collapsing the fight against racism into a broader class fight for economic equality, but by highlighting the central role of racism and making it a concern of the entire working class.

While I also hope to see Black Lives Matter turn the pressure up on Clinton and the Republican candidates in the weeks and months to come, criticisms of their tactics thus far -- targeting Sanders and "taking over" some of his speaking events - are in my view off base. Black Lives Matter is the type of grassroots people's movement that Sanders prides himself on representing; he was a good first target precisely because he's a natural ally and the candidate most likely to respond to such a protest with a policy agenda addressing its legitimate concerns. Writing about the first protest at Netroots Nation, Joe Dinkin captured it best:

Here's one stab at a better response [Sanders] could have given [to the Black Lives Matter protesters]: "We need a democratic revolution, and you are part of it. I admire your courage in speaking up. I learned of the troubling death of a black woman in police custody, and, yes, I will say her name: Sandra Bland. I will say her name because black lives matter. I admit I don't have all the answers. But your fight is my fight. For dignity and equality for all. I need you to fight with me and help me learn. Together we can change both politics and culture and ensure that black lives matter..."

This constituency is demanding to have the issues of structural racism and police violence taken up within the political system...They're forcing Sanders and other candidates to respond on an issue that it seems like they would have preferred to avoid. If Sanders responds by joining in their fight, they've pushed the Movement for Black Lives into the presidential debate and into the mainstream of [American] progressive politics--from which they currently and justifiably feel left out.

This is fair game, and an approach that fans of Bernie Sanders should understand...For people who simply wanted to hear the candidates answer questions and present their stump speeches, there are plenty of opportunities for candidates to share positions on the issues--at least on the ones they're not ducking...The Black Lives Matter agenda is not the only issue of moral urgency, but it most certainly is one of them. All progressives should applaud activists who took the opportunity to push it forward.

It is quite possible that, were it not for the Black Lives Matter movement, Sanders' racial justice agenda would not yet exist. That it contains excerpts like the following is telling:

"At the federal level we need to establish a new model police training program that reorients the way we do law enforcement in this country. With input from a broad segment of the community including activists and leaders from organizations like Black Lives Matter we will reinvent how we police America."

So we have two groups to thank for Sanders' ambitious racial justice platform. Sanders and his campaign staff absolutely deserve credit for unleashing it and for being allies in the movement. Black Lives Matter deserves the bulk of the credit, however, not just for pushing the conversation on this issue forward, but also for reminding us that even the best presidential candidate won't be able to enact the change we need without a constructively critical social movement behind him.

Note: A version of this post originally appeared on 34justice.