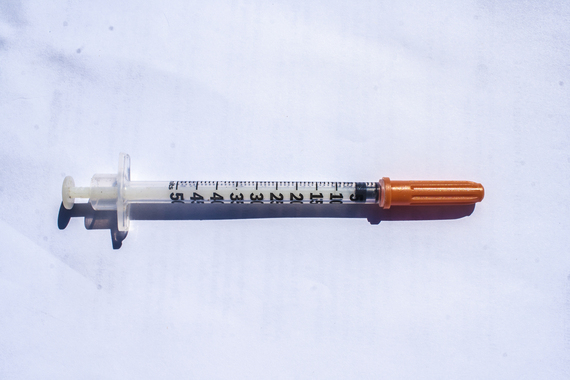 The country is in the middle of an unprecedented opioid crisis. The majority of overdose deaths - six out of 10 - involves someone taking an opioid such as heroin and pain relievers. This is the second in a two-day series by writing fellows for the Center for Community Change who share their take on a crisis that is not only killing Americans at record rates, it is costing billions of dollars in health and social costs and overwhelming hospitals and police departments. The first piece is published here.

Even when it comes to drug addiction, black lives matter less.

Consider the current opiate epidemic, where the overprescribing of Vicodin and Oxycontin has corrupted minds, crippled bodies and shook politicians to reconsider long-held beliefs about substance abuse and criminal justice.

Crack cocaine's disruptive effects did much the same thing to black minds and bodies in the late 1980s and early 90s. But the political, policy and media response to the two epidemics could not be more different.

Today's opiate abuse fits the narrative of the age: white middle-class is in pain, a literal agony and figurative malaise from the vanished American dream. Heroin addicts are seen sympathetically, as people struggling with the challenges of hard lives.

Consider the recent hand ringing after an Ohio police department released a photo of a white couple overdosing on heroin as a 4-year-old-boy sat in the back, strapped to his car seat. The police say they wanted to highlight the tragedy of the scourge, while on social media, people were angry that the photos shamed those suffering from addictions.

Or how one policy expert describes heroin addiction on Scientific American's blog as a dependence formed as a result of childhood trauma, mental illness and job loss, personal risk factors that lead people to self-medicate.

Or how politicians such as New Jersey governor and former presidential candidate Chris Christie delivered an impassioned plea last fall where he kicked the base that supported the notion that people who abused substances are "getting what they deserve."

"There's this myth that everybody can just will themselves off of it," Gingrich said. "Imagine that we said, 'You know, we shouldn't give people insulin - they ought to will themselves to the correct diet and exercise and giving insulin makes them weaker.'"

Imagine if Gingrich's response to the crack epidemic of the 1980s had taken the same measured approach. Back then, crack cocaine was a battle in the culture wars that became a chance to exploit racial divisions for political gain. There was little sympathetic discussion about how the people addicted to crack suffered the same risk factors as the white heroin addicts of today.

Instead, Gingrich, along with other policy experts and politicians, advocated a stronger crack-down on arrests and jail time. A 1989 profile of Gingrich in Mother Jones included the then-House minority whip's response to the draconian tactics of the government's war on drugs, and by extension, black people.

"Gingrich talks vaguely of the need for 'much more empowerment, much more self-control," of those using drugs, Beers wrote.

In September, 1989, William Bennett, the nation's first Drug Czar, announced his $7.9 billion battle plan to combat drugs, specifically crack--70 percent of which would be spent on hiring more police and building more prisons.

The crime bill that passed in 1994 exacerbated the problem by lengthening sentences for crack, but not powder cocaine use and sales, as well as defunding prison education programs. The outgrowth is the police militarization that has stomped over black communities. Between 1995 and 1997, the defense department donated 1.2 million pieces of military hardware to police departments, including armored personnel carriers, rocket launchers, laser scopes and intelligence gathering equipment.

These efforts targeted black communities, not aided them, says legal scholar Kenneth Nunn, and fuels the anger and distrust against police so prevalent today.

If today's heroin stories are about white pain, yesterday's crack narrative focused on the unrestrained id of Negroes. Like the current opioid crisis, the crack cocaine problem elicited mounds of articles and hours of TV stories, specials and documentaries, but unlike the opioid crisis, there is a lot less empathy.
"Between October 1988 and October 1989, for example, the Washington Post alone ran 1565 stories ... about the drug crisis," wrote the editor of the 1998 book "Crack in America: Demon Drugs and Social Justice."

"The Post's own ombudsman ... editorialized against what he called the loss of 'a proper sense of perspective' due to such a 'hyperbole epidemic. He said that, 'Politicians are doing a number on people's heads.' "

I remember those days quite well, which is why I agree with Yeshiva University law professor Ekow Yankah's assessment of that time in history in his PBS NewsHour essay last March comparing today's heroin headlines with the visuals of the crack era.

"Television brought us endless images of thin, black, ravaged bodies, always with desperate, dried lips. We learned the words 'crack baby,' " he said. "Back then, when addiction was a black problem, there was no wave of national compassion. Instead, we were warned of super predators, young, faceless black men wearing bandannas and sagging jeans."

But crack's black face was exaggerated. When neighborhood was taken into account, there was no variance in race and crack use in racially mixed neighborhoods. Even today, crack is still viewed as a "black" drug, although whites smoke it in higher numbers than African Americans.

A most prevalent hyperbole was the "crack baby" craze. When juxtaposed with how the media portrays the plight of heroin babies today, wounded angels clipped by a mother's pain mismanagement, the sci-fi scary analysis of the crack era is as contemptible as it is laughable.

Journalist Kali Holloway highlighted the duality when she compared editorials that call for empathy for heroin-addicted mothers instead of scorn to the fear mongering in the 1980s crack era commentary that created the idea of a generation of sociopath "super predators" roaming the countryside.

Crack did lead to an increase in the education gap, but the nightmarish scenarios didn't come to pass. Yet the threat became so believable that it may have been hardwired into how white people perceive African Americans, particularly males, as threats.

"I suppose what that really suggests is how sad it is that black American humanity remains unrecognizable for so many white Americans," Holloway wrote.

Opioid addiction is a public health emergency, and it is a good thing to see that party boundaries drop and lawmakers consider policy decisions that treat both the present crisis and the future effects. Compassion, compromise and restraint ought to be hallmarks of our democracy. Too bad these traits were not present 25 years ago.