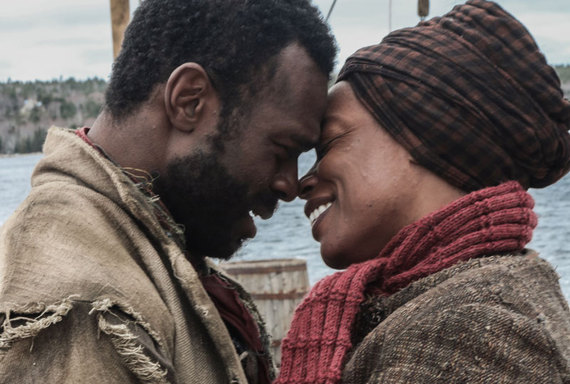 On the recent cable broadcast of Book Of Negroes when Aminata Diallo says to her former slave owner, "I love that slave man... freely," she was not only claiming her love for her African husband, she was committing an act of resistance. Manifesting their love was a radical expression of freedom for slaves that even chains couldn't suppress. That kind of freedom was a threat to the entire institution of slavery and, seemingly, is one that still leaves Hollywood green-lighters mad shook. A century and a half after the abolishment of slavery and the idea of seeing a Black couple fully in the throws of love is still an intimidating premise, at least cinematically speaking. Even with an African-American First Lady and POTUS whose 2012 victory photo captured them in a sweet embrace and became one of the most retweeted images ever, for many -- if not most -- studio execs, there's still nothing iller on screen than the image of a Black man and a Black woman enjoying a long, deep kiss or God forbid, sweating out their edges doing the wild thing. The fear that a love story featuring two Black actors is not engaging, believable or desirable is very real and one that still defines the mindset of many studio execs, casting agents and producers. They may not own our bodies, but by controlling and limiting our narratives around love and sex, Hollywood, like so many of those pre-Civil War plantation owners, is actively extinguishing the freedom and pleasure of Black folk.

Enter Beyond the Lights, a budding love story between a cop and a Rihanna-esque pop singer that dares to defy those racist constructs. Recently released on DVD, Beyond The Lights features Gugu Mbatha-Raw and Nate Parker. Due to absurdly poor marketing, it had a short, abysmal run in theaters, which is sad because what initially looked like a bootleg Bodyguard bite from promos is actually a refreshing, well-acted story about identity, authenticity, the complexity of family expectation and grown-folk attraction. The scene when Noni and Kaz are on the beach is Black love #unfiltered, and according to the film's director, Gina Prince Bythewood, something we almost did not see: "Some studios did not want two people of color in the lead. They said, 'Could you make the male lead White?' And that, I would say, is racism."

Ironically, the small screen is experiencing big success from shows centered on the romantic drama of Black folk. If Lucious and Cookie's passion proves nothing else, Empire's history-making high ratings show that viewers want to see Black love stories and sensuality. And yes, some of us still root for ‪‎Olitz (Scandal's Olivia Pope‬ and Fitz Grant), but best believe if Idris Elba joins the cast as Liv's new love interest, Olitz will be so O-ver. We've played our Love and Basketball, The Best Man, and Love Jones DVDs so much they're worn thin. And although we liked Hitch and thought Something New was cute, thanks to shows like Girlfriends, Being Mary Jane, The Game, How To Get Away With Murder, and even The Real Housewives of Atlanta, we've come to appreciate getting off seeing ourselves, for a change, in the matrix of love, romance and steamy sex, and no doubt, we'd like to get our fill from the big screen players as well.

When the numbers for Will Smith's latest flick ‪Never Lose Focus‬ came in a few weeks ago, they were down. It was the first time Will Smith didn't break 20 million at the box office premiere weekend in seven years! Some attribute the low box office to Will's fleeting star power, but maybe something else is happening. Maybe those of us who lit Twitter ablaze with our #ChocolateLovers hashtag last month when Being Mary Jane introduced a new dark skin lover for its eponymous lead; and those of us who saw ‪the Oscar-nominated Selma‬ and delighted when Martin and his "Cori" shared a warm embrace; and the millions of us who tuned-in to BET to watch the massive love story that was the romance between Aminata and Chekura, have all suddenly realized just how starved we are for images that celebrate the kind of love our ancestors died for, that our parents fought for, and that many of us have now or desire to have. Will Smith's star power is not on the decline so much as our Black love chakras have been split wide open and like hippie junkies, we just want a bigger, more powerful hit.

When some of the most fascinating and most popular couples in America are Will and Jada Smith, Beyonce and Jay-Z, and the Obamas; and Solange's wedding to a Black man is what actually broke the Internet, it's high time Hollywood takes note. Now that their phobic ways are beginning to affect their own bottom line, maybe we'll start seeing some changes in who gets lead casting in love stories. There's nothing wrong with interracial romance or Black romcoms, but the full complexity and beauty of Black folk in love does not begin with Monster's Ball and end with Madea. Somewhere in the middle, there is nuance -- both pleasurable and painful and a legendary love centered in joy, truth and freedom and that love deserves to be seen on the big screen.

Founder and Editor of theHotness.com