In comparison to firms owned by other race and gender groups of business owners, Black men's firms were hit hardest by the Great Recession. Of the 10 such groups analyzed in the report, "The Color of Entrepreneurship," only African American men had a decline in their number of businesses from 2007 through 2012. Black men's businesses declined by 2.3 percent. (Note: "The Color of Entrepreneurship" report is only an analysis of privately owned firms, and it focuses on firms with paid employees.)

An examination of business owners by industry shows that African American men had their largest declines in the number of firms in retail and construction. The figure compares the change in the number of Black men's firms with other men's firms in the retail and construction industries. White men and American Indian men had declines in the retail industry of less than 2 percent. Black men, however, had a decline of 26.4 percent, more than 10 times the decline of White men. 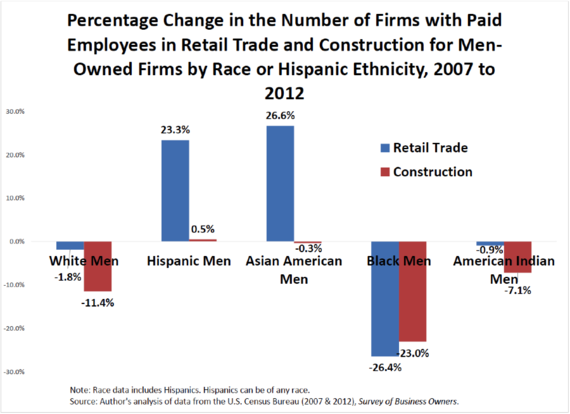 Latino men and Asian American men had a very different experience from White and Black men over this period. Both of these groups had increases in the number of retail firms with paid employees. For Latino men, the increase was 23.3 percent, and for Asian American men, it was 26.6 percent.

In construction, none of the men's groups had any significant growth in their number of firms, but Black men experienced the largest decline. The number of Hispanic men's and Asian American men's firms remained essentially flat. Hispanic men had an increase of 0.5 percent. Asian American men had a decline of 0.3 percent. The other groups had significant declines. American Indian men's firms declined 7.1 percent and White men's firms declined by 11.4 percent. Black men saw a decline double that of White men--23 percent.

As the figures show, Black men who are entrepreneurs were walloped by the Great Recession. The exact causes of the poor performance of their businesses are not clear. The data discussed in "The Color of Entrepreneurship" suggest that economic conditions forced the closure of many of the weaker of Black men's business. Firms owned by Black men had an increase in average sales and an increase in average pay from 2007 through 2012. It is likely that this increase was due to weaker firms with lower-than-average sales and pay going out of business. We will have to wait and see if firms owned by Black men will be able to rebound and prosper during the nation's economic recovery.

This post first appeared on GlobalPolicy.TV. Algernon Austin is the author of America Is Not Post-Racial: Xenophobia, Islamophobia, Racism, and the 44th President which is the only book to analyze the 25 million Obama Haters in America.