Jalyn Broussard was excited to show off his haircut at school last December. It was the first time the 5-year-old sported a different haircut than his 8-year-old older brother. 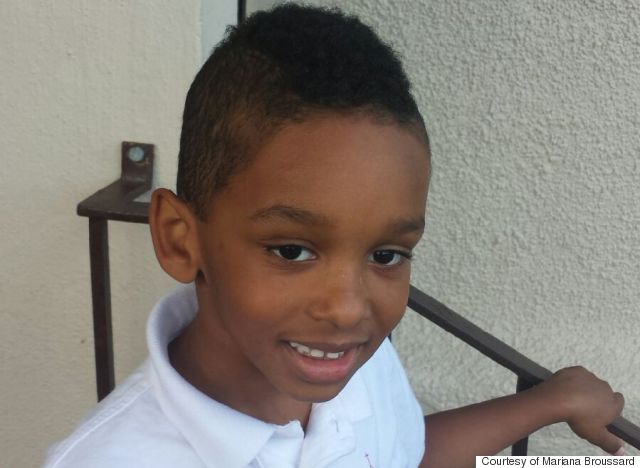 Thirty minutes into the day, his kindergarten teacher called his mother in front of the class to tell her his haircut was inappropriate and he had to leave school and return once his hair had been changed, the San Jose Mercury News originally reported. Jalyn’s mother, Mariana Broussard, asked if her son could stay for rest of the school day and the school’s principal, Teri Grosey, agreed.

According to Broussard, Jalyn's kindergarten teacher and principal, at Immaculate Heart of Mary School in Belmont, California said Jalyn’s “modern fade” violated the school’s hairstyle policy, insisting that it was a “faux hawk” and describing it as distracting to his classmates.

“I was really shocked,” his mother told The Huffington Post, adding that Principal Teri Grosey had complimented Jalyn and his brother’s haircut from across the parking lot earlier that day. Broussard picked Jalyn up after school and took him to cut his hair so he would be allowed to return to school that evening and sing in the Christmas program. After having his head shaved, he was allowed to sing.

Broussard believed that her son was being unfairly treated because his hair was different than most of the children in his predominantly white school, a private Catholic school outside of San Francisco. Members of the Immaculate Heart parish for 30 years, according to NBC Bay Area, Broussard and her husband sought equal treatment for their son.

Before he was forced to change it, the 5-year-old’s offending haircut was less than half an inch longer on top than the tapered, closely cropped sides, his mother described. Broussard said she reread the school’s parent handbook and could not find any rule that had been violated.

“There’s no spikes, it’s not long, it’s not a faux hawk,” his mother said. “This is a common, conservative haircut in the African-American community."

She brought in photos of talk show host Michael Strahan to demonstrate how common the haircut was and showed the administration photos of white students wearing a similar haircut at the school’s Halloween party.

The principal told Broussard she would "consult with the Archdiosese of San Franciso and Father Powell" and get back to her.

When the school returned from winter break in January, Broussard said she noticed that another student speaking at school mass had the same haircut her son was reprimanded for only a few weeks before. The student was not asked to change his haircut. Broussard asked the principal why her African-American son was forced to change his hair and the other student, who was not black, was not.

The principal told her the student’s modern crew cutwas acceptable because it didn’t extend from his hairline to his neck -- a small feature that apparently made Jalyn’s haircut “distracting to the learning process.” Broussard noted that this specific language was not in the handbook, nor was she notified of this detail when asked to change her son's hair.

After many attempts to get the school to rectify their unfair treatment towards Jalyn, Broussard removed her two children from the school in January. She filed a complaint with the U.S. Department of Education’s Office for Civil Rights in June to seek tuition reimbursement totaling about $16,000.

Broussard said that she’s disappointed in the school’s “lack of response and lack of interest” in addressing her concerns.

Immaculate Heart of Mary School did not return The Huffington Post’s request for comment.

“This is a clear cut case of discrimination based on race,” Jennifer Weiser Bezoza, Lawyer’s Committee for Civil Rights' Director of Education Advocacy, which works to justify inequities confronting racial minorities, said in a press release, which continues:

Jalyn Broussard was treated differently than other students for no reason. Furthermore, no consideration was ever shown for the fact that, as an African-American, Jalyn’s hair texture differs from that of his white and Asian peers, which necessitates a difference in cutting and styling. By targeting and isolating him because of his hair texture, [Immaculate Heart of Mary School] caused him severe emotional harm and distress.

Broussard said Jalyn and his brother, Noah Broussard, enjoy their new school. The school is bigger and more diverse and their mother really appreciates the school’s lessons on cultural sensitivity. Still, she says she can tell her son’s confidence took a hit.

“I think it ostracized him,” Broussard said, explaining that it took him longer than usual to adjust to his new environment. “He didn’t understand the singling out.”

Jalyn and Noah have been punished for trivial matters by the school several times, according to the complaint. Their father, Errol Broussard, talked to them about how being a black male in America means that sometimes they’ll be treated unfairly, regardless of age.

“We talk to them about how there will be higher visibility for them so they have to do better,” Broussard said. "Unfortunately, this is something you’re experiencing early."

In 2013, a Florida school considered suspending a 12-year-old girl unless she cut her long natural hair, deemed a "distracting" violation of the dress code before the school walked back the demand. Earlier this year, Army regulations for women's hair were challenged by servicemembers and members of the Congressional Black Caucus for being racially biased against black women.