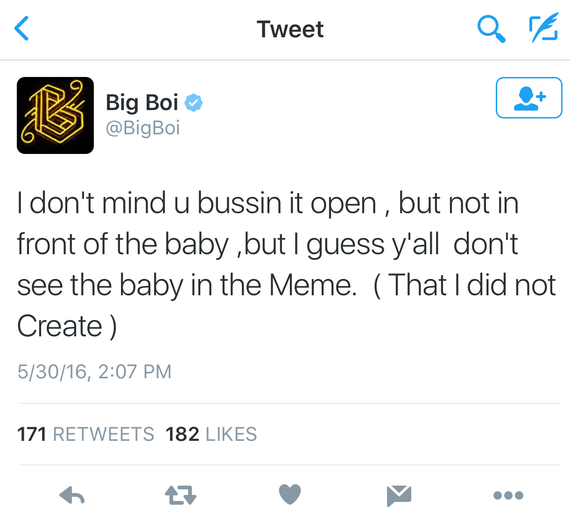 My plan was to wrap up Memorial weekend doing some laundry, cooking, and enjoying a little Netflix and chill. But then Big Boi trended on Twitter. I promised myself many months ago that I would leave rappers and their socio-familial insights to themselves after I wrote my last of two articles on the Future/Ciara saga. But there are certain topics to which, as hard as I try, I cannot turn a deaf ear. One in particular being the ongoing public vilification of black women and, this time, black mothers.

The growing trend amongst many of our black male celebrities is to publicly denigrate black women and mothers. Big Boi was the latest to take aim when he posted a meme drawing a comparison between the black mother from the 70s and the one of today. The split image showed a fully clad Florida Evans from the popular TV series Good Times standing in front of pots and pans speaking to her daughter. The other depicted a younger black woman straddling a stool with her back to the camera as a child looks on. She is donning a bikini top and thong, looking over her shoulder, and smiling at the camera. At the bottom of the meme is written: 'And We Act Like We Don't Know What's Wrong With These Kids.'

After seeing this, I was less concerned about what is going on with 'these kids' and more concerned with what is going on with our black men. When did the state of our children fall solely upon the shoulders of black women? As fathers and the presumptive heads of families, black men share equal or greater responsibility for how our children are raised. Whether these men live in the same home as their children or not, if they are fulfilling their parental duties, even when mom is failing, he should be the safety mechanism that prevents ultimate disaster. Despite this fact, many black men seek to lay blame at the feet of black women instead of actively working with them or assuming greater parenting responsibilities when necessary to ensure positive outcomes for their children. Either course of action is better than playing the blame game, name calling, or engaging in stand-offs. Because from that nobody wins, especially the children.

The vilification of black women by black men is nothing new unfortunately. But when celebrity black men use their substantial platforms to take aim at black mothers, a destructive precedence is set that has a contagion effect. It bolsters the stereotypical image of the black mother both inside and outside of our community as being uneducated, ratchet, on welfare, gold-digging, promiscuous, and overall failures as women and parents. And these stigmatizing beliefs are emblazoned in our collective consciousness when wealthy successful black men launch public attacks against black mothers including those of their own children. These stereotypical characteristics are far cries from who the vast majority of black mothers are. But in the unfortunate instances when she is all of the above, at what point does accountability set in with black men for choosing to have children with women like this?

What are any of these men doing to change the narrative? Dare I say nothing. How can they when the same women with whom they criticize and blame, they exploit through misogynistic music and videos that make them millions. These men cannot have it both ways. They cannot nullify the black mother's ability to parent, seemingly based upon her appearance and inappropriate behavior as Big Boi did, when they promote and profit from her hypersexual image. They cannot bash black mothers who work as strippers when they are more than happy to make it rain in the strip clubs or in the boom-boom rooms of their homes (I remember seeing an episode of MTV Cribs when Big Boi showed off a stripper pole he had in his home). They cannot claim not to 'love these hoes' when the Gram proves the bigger the ass the greater the likes. These men forfeit their right to judge when they actively participate in and perpetuate the exploitation of black women who are often somebody's mama.

But what was most interesting to me about the meme Big Boi posted was that Florida Evans, the most marginalized, although beloved, black mother in the history of television, was presented as the quintessential representation. Not Mrs. Winslow from Family Matters, or Aunt Viv from The Fresh Prince of Bel Air, or Claire Huxtable from the Cosby Show, but Florida Evans--a struggling black mother living with her family in the ghetto.

My example of black motherhood, as for many others, was not at all that of Florida Evans. I was raised in the South Bronx, in the 70s, by a black mother who worked full-time by day while attending college at night to complete her undergraduate and Master's degrees. The black mother who headed my household worked her way up from a customer service representative to an executive level position for the largest utility company in New York, from where she retired after 34 years. The example of black motherhood for me was that of a consistent provider despite never receiving a dime of child support from my gainfully employed father from who she was divorced.

I myself am a black mother who is both a college and law school graduate. I work as a professor and freelancer to fully financially support my son. I've never collected public assistance. I've never been the subject of a child welfare investigation. And in my 44 years, I have managed to stay off of the stripper pole.

I am not an anomaly. I am one of many black mothers who not only fall short of the stereotypes, but crush them. Decades ago, Malcolm X said that the most disrespected and unprotected person in America is the black woman.

And when she is, not only by the world, but also her black man, the injury cuts all the more deeply.