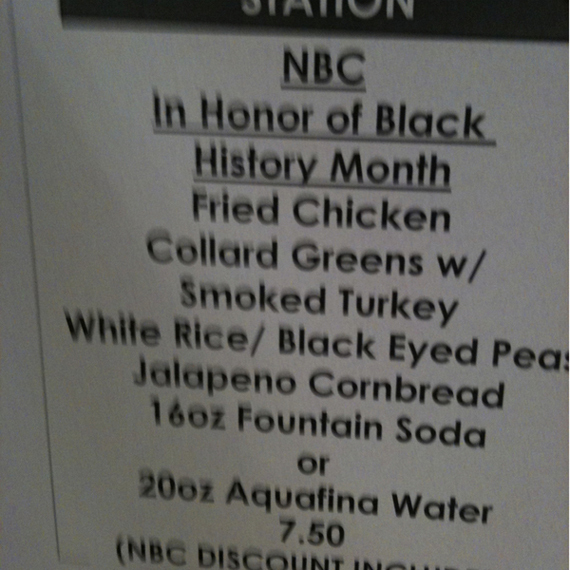 Poor Leslie Calhoun, chef at NBC's 30 Rock headquarters. The black foodie thought she was paying homage to her race by hanging a sign up that read: "In Honor of Black History Month," followed by a yummy menu of fried chicken, collard Greens w/smoked turkey, white rice w/black eyed peas, and jalapeno cornbread. Seems pretty innocent and festive, right? Well, not according to musician Ahmir "Questlove" Thompson, the 70's-era-afro'd drummer for the band The Roots and the Jimmy Fallon show, who apparently equates fried chicken with the "N" word.

According to Calhoun, Questlove ordered up some of that finger-lickin' good chicken, a little neckbone mixed with some black eyed peas (perhaps Fergie should be the one pissed off?) and then, incredulous, stepped off the line to post a picture of the controversial menu to his 1.2 million Twitter followers...causing a stir both in cyberspace and in NBC-commissaryspace.

Personally, I'm not sure what the fuss was/is about. Would Jews claim anti-Semitism if there was a sign honoring Jewish History Month with a menu of brisket, latkes and chicken soup? Would Hispanics think it racist to honor Hispanic History Month with paella, refried beans and guacamole? I mean, is this really something Questlove or anyone else should be wasting time on? Has America become so sensitive and politically correct that a black cook cannot feature an ethnic menu and celebrate her people without being hit with the racist label....and by a self-righteous, rabble-rousing, self-soul-food-Loathing twittering black man, no less? Well, NBC executives decided to remove the allegedly racist menu sign, so judge for yourselves.

Perhaps Questlove should stick to playing drums and leave the social commentary to folks like Jon Stewart and Prof. Cornell West.