Race relations can be a touchy subject. Only a very perceptive filmmaker could tackle the topic and be remotely successful. It would require a writer/director to be smart, balanced, sensitive and able to see both sides of the issue. The characters would almost need to be extensions of our opinions and thoughts, so everyone has something in the game. On most of those levels, this very shallow, poorly conceived and developed film, which is based on a true story, is a well-meaning misfire. 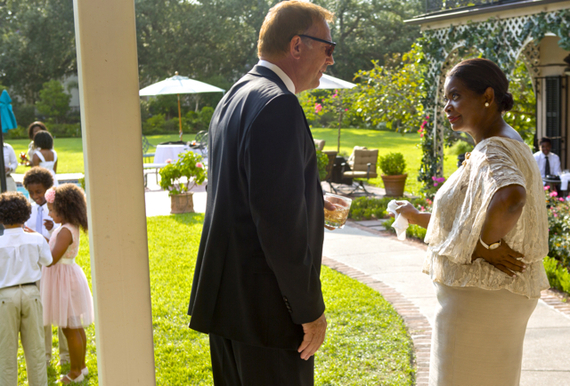 A white middle-aged Los Angeles attorney, Elliott Anderson (Kevin Costner), can't get over the loss of his recently deceased wife. He's turned to the bottle. His life is empty, except for the daily embrace of his biracial granddaughter Eloise (Jillian Estell). Elliott is content to raise Eloise, but he is inept when it comes to school schedules and child-rearing responsibilities. His wife did all that stuff. Eloise lives with her granddaddy because her mom, his daughter, died in childbirth and her dad Reggie (Andre Holland), a drug addict, is MIA. Cue the stereotypes.

Mike Binder is an actor/writer/director (Reign Over Me): a jack-of-all-trades filmmaker. He worked previously with Costner on The Upside of Anger, and his screenwriting hasn't progressed. The characters are poorly drawn. The dialogue is never memorable, unless Elliott is calling Reggie the "N" word. (And note that black characters do not use derogatory terms when referring to white characters. Really?) The premise is decent but the execution is preposterous and plays out like an afternoon soap opera. This kind of lopsided storytelling doesn't play out in real life. File it in The Help category.

Meanwhile, on the other side of town, Compton, Reggie's family wants a little more sharing time with Eloise. In fact, the matriarch of the family, Rowena (Octavia Spencer), has decided to take Elliott to court. She is an entrepreneur who works out of her garage. Her nephew Jeremiah (Anthony Mackie), a successful lawyer, will handle the custody battle. Between bottles of Jack Daniels, or whatever alcohol is handy, Elliott and his law firm partners prepare for a fight. He also, to his credit, has hired a black math tutor for Eloise; Duvan (Mpho Koaho, TNT's Falling Skies) is a brainy, wizard type who Elliott also turns into his "Man Friday."

Supposedly the story is based on Binder's own experience co-raising a biracial child. Judging by what's on view, he seems to know a lot more about rich white people than he does about black people. Maybe he should have hired someone like Duvan to tutor him on black culture before he went down this path. The animosity between Elliott and Rowena is a joke. They hate each other, but he allows her family to come over and use his pool. Does that happen during most custody battles? Prepare to suspend your disbelief. It's an action you'll have to do over and over again if you stick with this movie until it ends 120 minutes later.

Kevin Costner has had his golden moments in film: Dancing With Wolves, Field of Dreams, Open Range. This is not one of them. He must be a teetotaler in life, because he is not a convincing drunk. Nor does he find any way to make any sense out of the pompous Elliott character. Think back to Costner's appearance at Whitney Houston's funeral. It's that same grandiose persona. Granted Octavia Spencer can bug her eyes out with the best of them, but her interpretation of the grandmother, who wants her grandbaby home, makes no sense. It's a tough character to play, because it is so poorly written. She was far better in Fruitvale Station, where she played a distraught mother in a way that let you know she is an Oscar-caliber actress.

Jillian Estell is a gorgeous little girl; she should be shooting commercials. But her acting is stiff. She is no Quvenzhané Wallis -- not at all. Andre Holland brings no inner complexity whatsoever to the pathetic Reggie role. No depth. No extra dimension. Nothing. The supporting actors who play Elliott's partners and staff are solid, SAG-card holding thespians and they turn in a strong day's work. The one actor who seems to rise above the fray is Anthony Mackie as the smart lawyer who is embarrassed by his deadbeat cousin.

The film's musical score is surprisingly rich and beautiful, thanks to jazz musician Terrence Blanchard, whose composing credits also include Red Tails, Inside Man and Love & Basketball. If the rest of the movie was up to his high standards, it would have been brilliant. The other tech elements (editing, set design) are fine but nothing stands out -- except Rowena's clothes, which look liked they were pulled of a costume rack and not bought in a department store.

Black or White may have good intentions, but what they are, are not obvious from what's on view. The burden of failure rests on the writer/director who hasn't a clue how to portray black families; can't get a seasoned actor to play a believable drunk; and mixes drama, melodrama and comedy (court scenes with a sassy judge and Rowena cause a chuckle) together into an unaffecting mélange.

Black or White doesn't work on a sociological level. Does it set race relations back? Not really. Does it give us any new insights? None. Is it entertaining? Somewhat, more like a stodgy extended episode of Days of our Lives than a hip exploration like The Young and the Restless.