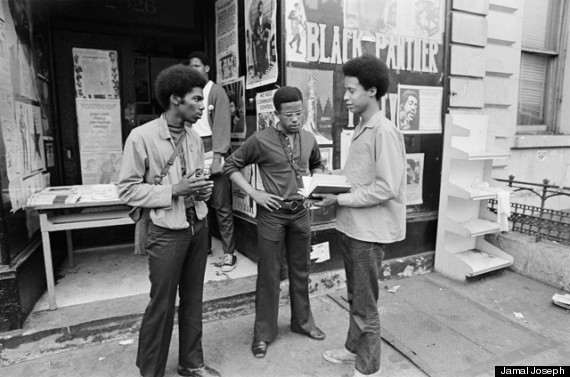 I was 15 years old when I walked into a Black Panther office and asked for a gun so I could kill a white man.

It was 1968, Dr. King had been murdered. Ghettoes across America were going up in riots and flames and I was a fatherless, angry man child who had been called "nigger" and smacked around by white cops a few too many times.

I was an honor student, a choir boy and a member of the N.A.A.C.P. youth council. My adoptive grandmother, "Noonie", did her best as a single parent to instill her Baptist Church rooted values of "love they neighbor." I dreamed of college, becoming a lawyer or in moments of liberated imagination a star ship commander like Captain Kirk from my favorite TV show Star Trek.

I worked part time as a stock and delivery boy at the supermarket so that Noonie wouldn't have to give me allowance from her tight income that was a combination of social security and part time housekeeping work. I would sweep, mop and vacuum so that Noonie would not have to do anymore bending or scrubbing when she pulled her tired, body up the stairs to our second floor apartment.

Noonie and I were close. I loved and respected her. But she was 70 and I was 15 -- and the hip, cool path to manhood was on the streets. The Bronx and Harlem street corners I passed and sometimes hung out on had gangs, drugs, craps games, fights, hustlers, foxy ladies and patrolling cops that had to be eluded even when you were doing no wrong. The teens and men who held court there were living examples of how to walk, talk, swagger and fight your way into the manhood ranking system of being a "cool", "bad" or "crazy dude" -- which was highest honor.

The corners also had "warrior prophets" who talked about Black pride, progress and revolution. Some would be respected "bad" and "crazy" dudes who had gone to prison or to the Vietnam War and came back with something they called "Black Consciousness." They critiqued drugs, hustling and violence as tools of oppression. They not only gave the corner contrast -- they gave it context, and I was fascinated!

The evening news was filled with images of civil rights marchers and anti war protestors being beaten and tear gassed by Cops and National Guard Troops. Black Militant leaders like H.Rap Brown would appear on the news urging armed self defense and revolution. The Afros, dashikis and denim jackets the militants wore became the style of the day from schools to the street corners. We wore our Afros and dashikis to church, marches and N.A.A.C.P. meetings. The elders frowned but tolerated us with memories of the "wild styles" they wore when they were young.

Then Dr. King was killed and style became ideology. A generation of black youth became instantly radicalized. I went down the 125th where riots were happening and almost got shot by cops. A group of men who I later found out were Panthers saved me and sent me home. A few days later I saw a news story about Black Panthers on TV.

In Oakland, California Panthers would patrol the streets at night with legally owned shotguns and law books. Police brutality and false arrests dropped dramatically. The response of the State Legislature was to change the gun laws so that Black Panthers could no longer do armed patrols. The Panther's response was to interrupt the hearings with guns and proclamations in hand. Bobby Seale, co founder of the Panthers told the press that black people had a constitutional right to bear arms to defend themselves.

Now I was more than fascinated - I was blown away! That night, as I watched Star Trek, I realized that Captain Kirk punched somebody out or used his phaser on damn near every mission. I may not be able to get on a star ship to promote justice in the universe but I was boldly going to seek out the Black Panthers.

During the long subway ride to the Panther office, two of my older friends told me that I might have to kill a white dude or maybe even a cop to prove myself to the Panthers. I sat in the back of my first Panther meeting psyching myself with the courage to prove I was a "bad assed, crazy dude."

In the middle of a discussion about better education, I jumped up and said that I was ready to get a gun and kill a white dude. The Panther running the meeting called me up and handed me a stack of books. He "armed me" but not the way I had anticipated.

In the coming weeks, the Panthers sent me on a number of missions. I had to make and serve pancakes to children in the Panthers breakfast program. I had to help tenants paint and make repairs to run down buildings that were on rent strike. I tutored first and second graders in the community run Liberation Schools.

"Organize people around their needs," Afeni Shakur (Tupac's mom) once told me, "Freedom to a hungry person is a meal, liberation to homeless person is a safe, warm place to live. A true revolutionary is motivated by love."

There were a couple of rifles in the Panther office and at Panther apartments. Fred Hampton had been murdered in his sleep during a raid by Chicago Police. Panther homes and offices had been raided and even bombed around the country. Young Panthers took turns standing guard at night -- waiting for the squad cars and tanks to come.

I was arrested at 16 and indicted as part of the Panther 21 conspiracy case. Although acquitted of those charges I would spend nine years in prison for leading raids on drug dens and hiding out people wanted by the authorities. "Hey, Scotty, beam me up!" No transporter beam came.

I instead received the wise advice from an old convict not to serve my time but to let my time serve me. I earned two college degrees, organized a theater company and became a writer in prison.

I am now a professor of professional practice of film at Columbia University, founder and Executive Director of Impact Repertory Youth Theater in Harlem, husband and dad to three kids who attended Columbia and Brown. At some events, I am introduced as a former Black Panther -- the truth is that I am an "evolved" Black Panther who still very much "involved" in the struggle for social change.

Harlem has evolved from a community filled blighted tenements and drug dens to a neighborhood with luxury condos and million dollar brownstones. But there are also 28 gangs in Harlem and street corners filled with young men who have a one in six chance of going to college but a one in three chance of going to prison.

There are organizations who claim to be inspired by the Black Panthers putting bounties on people and calling for armed rebellion. Members of the original Black Panther Party (many now in their 60s and 70s) cringe at this. In the sixties, the Panthers moved from guns and law books to service and community programs. Original Panthers would still be patrolling the streets with video cameras and lap top computers. They would be would be organizing and serving in community-based free food, health and education programs.

Armed with love and a vision of an "All Power to the People" society where all every member of the human rainbow has peace, voice, abundance and freedom -- seeking out what may be a "strange" and definitely a "new" world.