Trayvon Martin and Jordan Davis were two unarmed black teenagers killed by the same assailant: an irrational fear triggered inside those who carry the loaded baggage of historical hostility toward America's black boys.

The fear trigger that led to an assailant killing Trayvon was the combination of darkness of night and the hoodie covering his head in the rain. The fear trigger that led to Jordan being killed was his presence inside a vehicle in the company of other black males listening to music at a disrespectful decibel level. His words, expressing loud displeasure to his would-be killer, were drowned out by gunfire. Two completely separate juries, each apparently afflicted with empathy for the defendants, ruled that neither of these unarmed boys were murdered by their armed assailants. 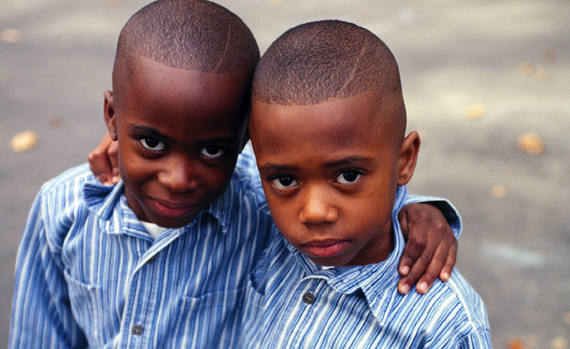 Fear of black boys prompted violent responses in the two cases above. And undoubtedly there are other example cases. But should these anomalous incidents result in the pendulum of irrational fear swinging the other way? Should millions of unarmed black males carry the burden of fearing daily for their lives based upon the potential that their lifestyle choices may offend others? The issue fuels a lot of public discourse.

More than 6,000 comments were submitted to Yolanda Young's opinion piece published by CNN, "There is No White Boogeyman." She introduced The Atlantic's Ta-Nehisi Coates' piece, which suggested the killing of Jordan Davis was yet another in a long line of violence stemming from the era of slavery, when black parents had no capacity to protect their kids from a hostile society. Young argued that "the talk," which many black parents have historically held with their sons, ought not infuse black youth with a similar irrational fear of today's society that afflicts the extreme fringes of America who fear even the presence of black males.

Yet, fear is commonplace in America. It is a fundamental tenet in the teaching of most American children (don't talk to strangers) and an ever-present influence in far too many political campaigns (terrorism and anti-America). Fear, it seems, is a familiar friend. And when triggered, one may be absolved of most any killing ... so long as the jurors can relate to one's situation, and one's fear excuse. The decisions made by two juries, supported by strong opinions expressed across social media, revealed a presumed societal acceptance of the fear excuse when it comes to taking the lives of unarmed innocent black males who were minding their own business.

Each of the verdicts -- George Zimmerman's acquittal in the killing of Trayvon Martin and Michael Dunn's mistrial on the charge of murdering Jordan Davis (but guilty on three counts of attempted murder of Jordan's friends) -- alarmed millions of concerned black parents and raised suspicions that their unarmed innocent black sons could be next to inadvertently trigger the fear excuse. Now there's national talk about "the talk."

I think it's time we updated "the talk."

Black boys are the hallmark of America's proud competitive spirit. It is this competitiveness that helped break institutional color barriers. But how much of that is ingrained in "the talk" with black teens?

Sure, we know the histories of Jesse Owens, Jackie Robinson, Muhammad Ali and so many others. And when Doug Williams became the first black quarterback to win a Super Bowl, he etched his name into the history that most every black boy knows. But black competitiveness beyond the sports and entertainment industries today is anemic.

Our children can't aspire to participate and compete in the landscapes they know nothing about. They can't forage into new frontiers they don't know exist. Today, the talk of black innovation and competitiveness beyond sports and entertainment is lacking. We don't talk about the stifling statistic that reveals 150 years after slavery, black America produces LESS than 1% of the nation's GDP. How is that possible with all of the individual achievements and progress to which we can point across every industry? Yet, collectively, we've not budged economically even a single percentage point.

Perhaps our economic stagnation is because we lack knowledge of how to compete off the field and off the court within local innovation ecosystems that sit adjacent to our communities in every urban region? Perhaps we fail to progress collectively because we fail to inform our children of the 21st century black innovators who stand as tall examples of our capacity to compete in today's innovation economy?

More than a decade into the 21st century and few black youth are aware of the enormous successes of John Thompson. Not the former basketball coach at Georgetown University. Rather, the former CEO of the global giant Symantec, and the current CEO of Virtual Instruments in Silicon Valley. Mr. Thompson, who was the only black man in America at the turn of the century leading a major tech company, now sits as Chairman of the Board of Microsoft, a seat once occupied by the company's founder, Bill Gates.

And how many parents are informing their children of the achievements of Emmett D. Carson, Ph.D. the black man who founded the world's largest community foundation in Silicon Valley, now managing more than $4.5 billion in assets? Dr. Carson is one of a number of significant black leaders in Silicon Valley whose names remain virtually unknown beyond that region.

And where is the talk about Johnathan Holifield, Esq., the former Cincinnati Bengals' running back who is the foremost expert on economic inclusion in the tech-based economic development field? Mr. Holifield has extensive experience in the field and is the architect of Inclusive Competitiveness, a framework destined to become a national economic imperative as the demographics of the country continue to shift toward a more multicultural society. Mr. Holifield is the only man in America with the distinct title of Vice President of Inclusive Competitiveness, a position he holds at NorTech, a tech-based economic development powerhouse in Cleveland covering 21 counties in northeast Ohio.

As the jury verdict in the killing of yet another black unarmed teen creates controversy and caustic conversations across the nation, parents are missing history in the making as many Historically Black Colleges and Universities (HBCU) are forming an unprecedented collaboration as members of HBCU ICE (Innovation, Commercialization and Entrepreneurship). This innovative construct, which empowers these valuable assets of the 20th century to better compete in the 21st, is the brainchild of Chad Womack, Ph.D., National Director of STEM Education at the UNCF (United Negro College Fund). Leaders from across the nation gathered last fall at Stanford University for the first-ever HBCU Innovation Summit. Yet, millions of black parents aren't talking about this historic progress, despite this being Black History Month.

"The talk" we inherited from the 20th century was based upon fear. The talk of the 21st century should include vision, encouragement, enlightenment and awareness of the new economic game and how to compete in a knowledge-based, tech-driven, globally competitive innovation economy. Black boys (and girls) have clearly demonstrated they can compete well in any game they are taught. While we teach them techniques in how to remain safe walking home (and incidents with the police), shouldn't we also instruct them on how to compete as high-growth entrepreneurs who create jobs and generational wealth while increasing their net worth and the economic competitiveness of the nation?

That's why I started the Saving America's Black Boys (SABB) Solutions Summit series. I'm presenting it at the SXSWedu Conference in Austin, TX for the second consecutive year. Isn't it time for "the 21st century talk" in your community?