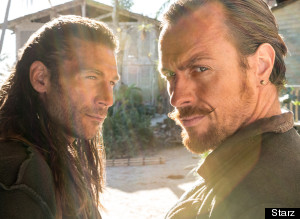 At first glance, "Black Sails" (9 p.m. ET Saturday, Starz) and "Vikings" (10 p.m. ET Feb. 27, History) appear to have a lot in common. Both shows revolve around marauders who take to the seas, plunder, fight, squint into the distance and drink more than their share of grog.

But unlike the tedious "Black Sails," "Vikings" does a good job of hitting the targets it has set for itself. Its modest stories are told in broad strokes, but that's a feature, not a bug. This gorgeously shot drama -- and it's one of the most visually striking shows on TV -- is simple but not simplistic, and that's a crucial distinction.

"Black Sails" clearly wants to inject some complexity into its sand-and-swords premise, but the drama runs aground of ambitions it doesn't have the skills to fulfill. That makes the simplicity of "Vikings" look like even more of a virtue, one that allows for greater focus and fewer distractions.

The History show displays an engaging curiosity about how people lived a thousand years ago, and that tone of genuine wonder -- as opposed to the cynical weariness so often seen elsewhere on TV -- is mighty refreshing, even when "Vikings" hits a slow-ish patch. As it sallies forth, depicting love triangles, bloody invasions, punishing sea voyages and power struggles, it displays respect for both its subject matter and its audience. Even if not all of its subplots work -- I simply can't make myself care about Ragnar Lothbrok's grumpy brother, Rollo -- it's unpretentious and direct without ever being condescending or vapid.

There's something endearing about the low-tech way of life "Vikings" depicts; any number of scenes feature goats wandering around, and the series' rough-hewn aesthetic -- a mixture of gorgeous fjords, sturdy furniture, homey halls and beautiful metalwork -- somehow makes life in a wooden hut by the sea seem pretty attractive. This season, Ragnar (Travis Fimmel) thinks about settling down in one of the territories he invades, and that's a promising direction for the show to take. (Who hasn't thought about giving up pillaging for a quieter life?) Of course, England's King Egbert is not particularly keen on the idea of Norsemen moving into his territory, and Linus Roache depicts the character's coiled intensity with admirable restraint.

As it did last season, the show thoughtfully explores ideas about how belief systems spread and what people do when confronted with gods -- or a God -- that makes little sense to them. The journey of Athelstan (George Blagden), a monk abducted by the invaders, takes believable twists and turns in Season 2, and though the Vikings continue to commit acts of great violence, those actions are in keeping with their deeply felt beliefs about the gods and the afterlife. "Vikings," one of the few mainstream shows to take religious belief seriously, is a clash-of-cultures story told in many different modes: We see savage hand-to-hand combat, different kinds of kings and societies, and conversions that are never really set in stone.

Like the Vikings themselves, the beliefs and goals of the characters are often on the move, and that gives this sincere melodrama an earnest energy. Midwinter has become a very busy time for TV fans, but you might find, as I did, that catching up with the show's first season is a quietly enjoyable endeavor. "Vikings" is not a show that's trying to rewrite the rules of television, but I'm happy to report that the second season improves upon the first.

"Black Sails," on the other hand, is a sodden and occasionally infuriating mixture of cable-TV tropes that takes a perfectly good premise and allows it to lurch around in bewildering and unpromising ways (and thus it will not surprise you to learn that Michael Bay is one of its executive producers).

At times, "Black Sails" appears to be aiming for "Game of Thrones"-style complexity, but the show doesn't have the chops or the cast for that. At other moments, it tries to be a "yo ho ho" action-comedy (at one point, one character comes very close to actually twirling his mustache).

The latter mode seems like the more fruitful path, but there's no real consistency of tone or direction; it's hard to decide if the show's pretension or confusion is more frustrating. Just as "Low Winter Sun" was a faux-complex cop drama, "Black Sails" takes the conventions of an action-adventure show and tries to give them a derivative dose of moral complexity, character ambiguity, blah blah blah. One day, someone will make an intelligent, subversive and enjoyable pirate-themed TV show, but arrrr, mateys, this isn't it.

As I watched, I kept asking myself, "This is a show about pirates, right?" If so, why was there a seemingly endless business meeting in Episode 3? That was just one of a number of scenes that were as exciting as watching barnacles dry. I don't think it's too much to ask that a show with the word "sails" in its title venture onto the water now and then, but much of the action (if you can call it that) takes place in a shore settlement, where a variety of meandering subplots will make you long for a bracing sea chanty.

Some supporting actors in this show have presence -- notably Zach McGowan as Captain Vane and Hakeem Kae-Kazim as Mr. Scott, a merchant/middleman -- but the two leads take this awkward melange of drama and melodrama and manage to make it less interesting. Toby Stephens plays Captain Flint as if he's auditioning for a London stage production of "Richard III"; raise your hand if your ideal description of a pirate captain includes the word "stuffy." Flint should have the kind of spark that animates the whole show -- or at least his own crew -- but you can understand why his minions are frequently plotting against him. Aboard ship or on dry land, this brooding captain is a bit of a wet blanket.

More problematic is Hannah New's character, Eleanor Guthrie. The writing for her goes to the core of what's wrong with "Black Sails": Apparently the show's creative team thinks that if you pepper a lady character's speech with f-bombs, she suddenly establishes herself as a charismatic badass. Well, no. New has no presence and, like the rest of the characters on the show, Guthrie never attains the depth that "Black Sails" so desperately wants her to display. Though "Black Sails" gives a lot of screen time to her attempts to keep her father's business afloat, the character is no Brienne of Tarth, and remains as blandly forgettable as a lesser "Reign" courtier.

A show like this doesn't necessarily require character depth: If it was mainly about marauding action and exciting raids, that would be fine. But there's too little of that kind of thing, and too much mistaken presumption about what constitutes complexity and nuance. "Black Sails" decided in its third episode [spoiler alert] that it had earned the right to show a woman being kidnapped, brutalized and publicly raped. There is a place on TV for that kind of harrowing sequence, but "Black Sails" had in no way earned it. The fact that the character, a prostitute who made the mistake of attempting to control her own fate, is shown accepting her punishment as her due is extraordinarily troubling -- not that the show appears to think that is the case. And so "Black Sails" became the latest in a long line of dramas to use sexual violence not as a chance to deepen the storytelling or the characters but as a contrived stunt meant to "up the stakes." Ugh.

Derivative fare like "Ray Donovan," "Low Winter Sun" and "Black Sails" exude an air of self-congratulatory laziness: It's as if these shows want to be praised for their bravery and edge, but they're traveling through territory that others have explored with much more rigor and intelligence. But shows with problematic premises or blusteringly dull ideas are to be expected: Even networks that should know better occasionally give in to their lesser instincts.

Starz's programming has been particularly disappointing in this regard. Whether they're period dramas, like "Magic City," "The White Queen," "Camelot," "DaVinci's Demons" and "Pillars of the Earth," or contemporary dramas like "Torchwood: Miracle Day" and "Boss," the network's shows have displayed a lack of discipline, a lack of vision as to how best to use the sometimes talented actors and promising genres on hand, and an ultimately wearying mixture of stupidity and silliness. The one exception to this bewildering reign of error was "Spartacus," which completely understood how to be a saucy, fun mainstream entertainment with a smart and subversive subtext. That could have been the cornerstone of Starz's empire, but more and more, it's looking like the exception.

The thing is, a lot of cheerfully mainstream shows right now are substantially better than they need to be; in the action-adventure realm alone, we've got "Vikings," "Covert Affairs," "Strike Back," "Banshee" and "Arrow," among others. What's mystifying is why Starz and the creators of "Black Sails" seem to think that, given the expanding array of options available to consumers, any content creators can get away with peddling fare that can't even manage to be consistently mediocre.