The challenge was simple: Three wildly different shows in four days. My 68-year-old mother joined me and provided her input. Here's the recap:

Living the History -- 125 Years of the Auditorium Theatre 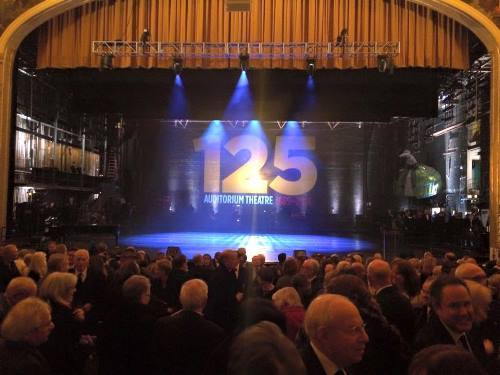 Chicago's historic landmark performance venue, the Auditorium Theatre, received a classy and compact 125th birthday celebration on Dec. 9. Following an introduction by emcee John Mahoney, Chicago Mayor Rahm Emanuel offered a few words on the importance of the venue in delivering world-class art to the city. And then, performers representing the wide range of the Auditorium's programming entertained the mostly black-tie and befurred audience.

Highlights included performances by Chicago Symphony Orchestra's brass ensemble, performances by dancers from Alvin Ailey and Joffrey Ballet, and the star of the night, Broadway powerhouse Patti LuPone, whose grand grand-aunt, soprano Adelina Patti, performed at the venue when it opened in 1889. The only misstep in this glorious evening was the inclusion of a random rock band to represent the various rock concerts the venue has hosted since the '60s.

But all was forgiven when, during the finale, the legendary theatre's side panels flanking the proscenium flew up into the rafters revealing the backstage, stage hands and technical crew. It took my breath away. A very fitting tribute to an army of people who make the art: it's more than just the performers on the stage -- it's the team behind the curtain who make it happen.

Mom rating: "Beautiful evening and amazing acoustics, but that rock band was loud." 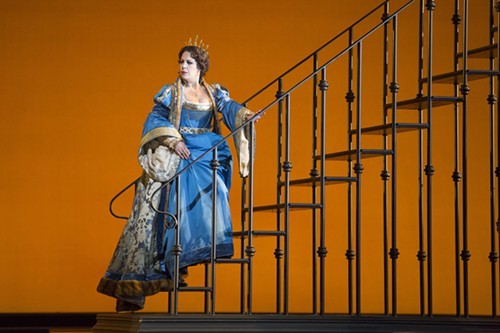 Ok, so I'm not an opera buff. But every now and then I challenge myself to dust off my suit and spend a few hours getting my fancy culture on. And Anna Bolena, the final in the Tudor Queen trilogy by 19th century Italian composer Gaetano Donizetti, seemed like as good a reason as any to visit Chicago's Lyric Opera, given Queen Anne Boleyn, who was married to King Henry VIII only to be beheaded after she failed to bear him a successor, is somehow vaguely related to our family -- the Bullens. Also, I'd heard good things about the lead, American Soprano Sondra Radvanovsky.

The good news is Radvanovsky simply blazes as the doomed Queen. With a voice reminiscent of Maria Callas, the regal Radvanovsky mines all she can from this thinly plotted and overly bloated opera (stick around for her heartbreaking mad scene late in the second act). The rest of the cast delivers Donizetti's score with courage and skill, but the material is about as flimsy as the production design, which features essentially one costume for both Anne and her confidant-cum-conspirator Jane Seymour (the impressive Jamie Barton) and a ceiling that occasionally reveals a few interesting backdrops. Indeed, it seems the budget cuts suffered by the Lyric have extended into the Royal Court.

Mom rating: "Nice to hear a full orchestra but they oversimplified the history. Seats were uncomfortable and I couldn't find the bathroom." 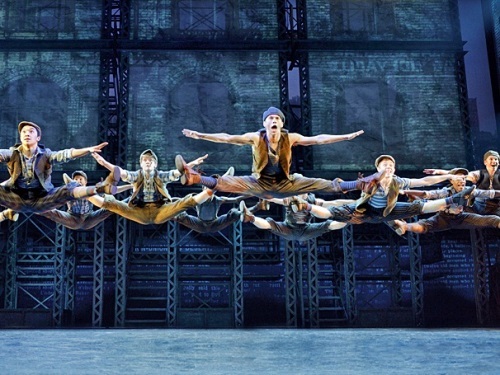 The cast of the National Tour of "Disney's Newsies"

Feeling drained from Tudor tedium, we closed out our two-show day with the National Tour of Disney's Newsies -- the stage version of the 1992 Millennial favorite starring a young Christian Bale and based on the real-life Newsboy Strike of 1899.

And what an injection of energy! Everything you want in a family musical comedy is here: great tunes (by Alan Menken) that follow you as you hum your way home, a talented cast, an engaging storyline featuring a hero, a villain and a love story, and the dancing. The dancing! This athletic cast certainly has their work cut out for them, effortlessly executing Christopher Gattelli's rough-and-tumble choreography that ranges from deftly staged fist fights to split kicks to gymnastic tumbles to tap.

In the Bale role, Dan DeLuca finds the right balance between the charismatic leader who initiates the strike and the forlorn young man who'd rather run away from his problems than deal with them head-on. As the smart young reporter who breaks the Newsie strike story while capturing the heart of the new-found union's leader, the spirited Stephanie Styles wins us over with her delightful first act number.

Based on the opening night audience's enthusiastic ovation, this certainly will become a hot ticket this holiday season.

Mom rating: "Those boys certainly can dance! It makes my knees hurt just thinking about it. Also: $9 for a glass of wine?"