Harriet had seizures, which kept her from getting a good nights sleep. As the morning sun stretched its rays through the branches of an old elm tree, she touched the scar on the back of her head, and winced at the memory of when she was struck by an overseer. She had refused to help him capture a runaway, and paid the price. As a result, some nights Harriet would journey, half-asleep, dreaming and strolling until sunrise. This morning she carried her sturdy wooden staff, as she walked down the Virginia road through beams of light tinted brown with dust.

Harriet was startled as a flash seared her eyes. She wondered if her body was possessed by another seizure. Then, suddenly, a thunderous cannon hammered through her ears. She recognized the sound. It was war.

As her eyes adjusted to the light, she could see the outline of a chariot five hundred paces in front of her -- a silver coffin on black wheels that belched as if it had swallowed a shotgun. The metal box barreled towards her faster than confederate cavalry. She ducked and rolled out of its way, but could see a white boy inside the machine, steering the metal box. 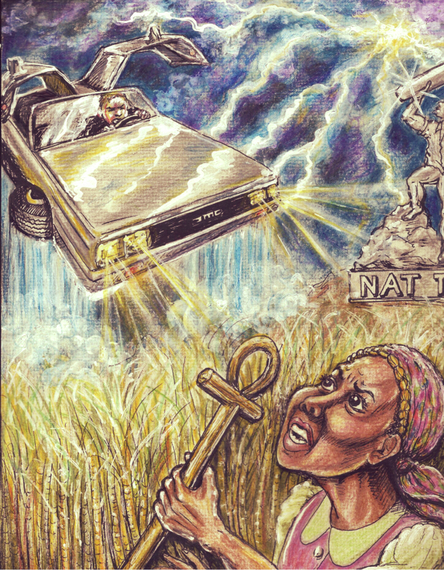 Harriet watched carefully as the chariot slowed to a creep, stopped, then peeled like an orange. She braced herself as two doors opened, arching over the machine like a bird stretching it's wings. The boy emerged from its belly. He introduced himself as Marty McFly, and asked if she was "The Harriet Tubman". Harriet did not say a word. She was aware of what white men, and even young boys, were capable of. She also knew there was a bounty on her head. This boy looked like he was intending to collect. She walked backwards as she tightened her grip on her oak staff.

Marty scratched his head, searching for words. "I'm from the future," he said, gesturing towards his vehicle, "I came back in time in this car to change the past." Harriet crouched down and grabbed a smooth stone next to her left foot. "In order to save my future, I need to kill Harriet Tub-" before he finished speaking, the rock ricocheted off Marty's forehead, as Harriet sprinted in the opposite direction. Marty screamed, enraged, and fell into the car. Wiping blood from his brow, he sparked the beast back to life and came charging towards Harriet. She ran away strategically, waiting until the car was within striking distance, then jabbed her staff through the car's side-window, etching another crack into Marty's skull.

Harriet smiled to herself. He may have trouble sleeping from now on.

In a spray of blood-speckled broken glass, Marty yanked a stick inside the car and suddenly, it took flight. Un-phased, Harriet calmly twirled her staff between the fingers of her left hand, while beckoning him with her right. With a frustrated grunt, Marty slammed his feet to the bottom of his flying vessel in an attempt to plow Harriet into the ground. Just before making impact, the car vanished. A battle of cat-and-mouse ensued as McFly attempted to catch Harriet off-guard, teleporting his metal chariot into various locations. Harriet quickly identified the pattern in his movements. Anticipating Marty's next emergence, she jump-kicked through his front-facing car window, slipping one foot into the wheel Marty was using to steer the mechanical beast, and using the other foot to bludgeon his face until it looked like a bruised white peach.

Knowing he will soon be defeated by the superior close-combat skills of Harriet Tubman, Marty desperately turned the space-time dial of his DeLorean, in an attempt to flee.

In a blinding flash of light, the car crashed into the side of a Virginia plantation in August of 1831. Marty and Harriet both stumbled out of the car, dazed. Marty limped onto his hover-board and rushed to a nearby plantation overseer for help, as Harriet shook off her concussion and assumed a defensive stance. The overseer, on horseback, grabbed his whip and lashed towards Harriet to subdue her. Moving quickly, Tubman side-stepped the attack and grabbed the end of the whip, promptly yanking the overseer off the horse. As she hog-tied her defeated assailant, Marty re-entered the battlefield with reinforcements. He floated arrogantly on his hover-board, followed by a dozen more overseers, all on horseback, carrying rifles.

This was not good.

Harriet ran into the nearby sugar cane fields for shelter and tripped, knocking a tall and wide Black man off his feet. She put a finger to her lips, imploring to him stay quiet. Harriet had mastered the art of stealth, while helping runaway slaves reach freedom. The man was the color of the night sky, and was holding a long and heavy machete. Harriet noticed that his left shoulder was branded with the words Property of Turner. He introduced himself as, "Nat". He could see the concern in Harriet's eyes, as she glanced back at the charging mob of overseers.

To Harriet's surprise Nat stood up defiantly, spit out the sugarcane he was chewing, and made a rallying call that resonated like a thousand African drums. Almost out of nowhere, fifty other Black men and women emerged from the fields, machetes in hand, and spit out their sugarcane in a similar fashion. The overseers where quickly overwhelmed by the organized Black militia.

Terrified by the ensuing rebellion, Marty slipped off of his hover-board and sprinted back towards his car, as Nat and his comrades stormed the overseers with freedom on their breath. As he struggled to get the car to move, Harriet jumped on horseback in pursuit of her assassin. Just as Marty sparks life back into the car, Harriet leapt from the back of the horse, on to the roof of the car, as it quickly accelerated. Speeding towards a nearby cliff, Marty appeared to be making a suicide attempt. Harriet held on for dear life as the car slipped off the edge of the cliff at 88 miles per hour.

In an explosion of light, the car vanished just before crashing into the ground, and re-materialized in a completely different world. Marty looked at the time/space dial on the car. The date was listed as October 21, 2015. Marty crawled out of the broken DeLorean, crippled by the crash. He rubbed his swollen eyes to reveal a bustling, technologically advanced, Afro-futuristic world. A sign-post read "Welcome to Virginia, of the United First Nations. Everyone in sight had black or brown skin, were staring at him, puzzled. Off in the distance, he could see a statue of Nat Turner with a machete in one hand, and the other hand triumphantly hoisting a hover-board over his head. Suddenly, the statue became obscured by the shadow of a tall Black woman. Harriet grabbed the car keys out of Marty's hand and used her boot to put one final crack into his skull.

The End. Next battle... Harriet Tubman vs. Professor X

Epilogue:
A few months ago I gave a Creative Mornings Talk about Revolution in Raleigh, North Carolina. In the talk I called Harriet Tubman a superhero and compared her to several of her white male counterparts: Marty McFly, Professor X, Batman and Ash Williams (of The Evil Dead/Army of Darkness). A few days later I wrote this short story pitting Harriet in a Celebrity Deathmatch style battle against Marty McFly. It was only right to drop it on Back to the Future Day. Illustration by Dimita Hicks.