On the evening of November 13, 2015, a series of coordinated terrorists' attacks occurred here in Paris. Before this, attacks occurred in Beirut, Turkey and Egypt. Other recent attacks occurred in Mali and Tunis. These attacks are unfortunately all too common in Syria, Iraq, Libya, and Yemen. In the same month, while we are talking about ISIS and the Paris attacks, ISIS terrorists and the Syrian regime have killed countless people in Syria. Which is more terrifying? What is happening here or what is happening there? Am I trying to say that we are having a common problem?

If things are just black or white, this gives us just one option...to attack back. So please don't listen to those who talk to you about human rights, peace, conflicts resolutions, and refuges crises. They are all bad ideas, when others are attacking you. You are right ... just attack back.

But what if it is not about black and white? What if revolutions are not about promoting violence or peace; rather revolutions are reactions toward injustice and a lack of both democracy and freedom of expression. Same when it comes to religions as Raza Aslan, the Iranian/ American Scholar said ''Religions aren't promoting violence or peace; it depends on what you're bringing into it. If you are violent person then you will bring violence.''

I understand you don't have many options; it is either a dictatorial president or an undivided opposition. This chaos and instability is what ultimately led to ISIS.

If you believe that there are only two options, leaving you to choose between the lesser of two evils, it is better not to make a choice. However, what if you try a different way? What if you create a new platform by supporting the right people and voices? People just like you and I who fear losing their families, friends, lives, and safety in their countries. Those people are the key, the magic solution to avoid fighting violence with violence, fire by fire. It is about finding the colors between the black and white. This world is not full of only devils and angels; there are humans in between as well. Humans out there every day who devote their lives to fighting for the defenseless and being a voice for those innocent victims whose silent cries echo in a distant wilderness. But those cries are not in vein. We hear those cries thanks to the extraordinary courage of regular people who believe in justice and humanity. 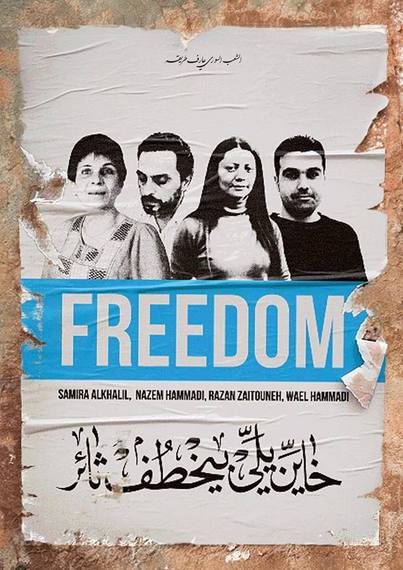 In ending, let me mention some names of people risking their lives on a daily basis so that we can be safe.

Razan Zaitouneh - Lawyer, abducted by members of the armed groups, on 9 December 2013, in the Damascus suburb of Douma Her fate and whereabouts remain unknown

Khalil Ma'touq - Lawyer and human rights defender, arrested by the Syrian authorities, on 2 October 2012, in the Damascus suburb of Sahnaya. His fate and whereabouts remain unknown

Samira Khalil - Peaceful political activist; abducted by members of the armed groups, on 9 December 2013, in the Damascus suburb of Douma Her fate and whereabouts remain unknown

Bassel Khartabil - Freedom of expression advocate, arrested by the Syrian authorities, on 15 March 2012, in Damascus Transferred on 3 October 2015 from Adra prison to an unknown location

Nazem Hamadi - Lawyer and poet; abducted by members of the armed groups, on 9 December 2013, in the Damascus suburb of Douma His fate and whereabouts remain unknown

Ayham Mostafa Ghazzoul - Member of the Syrian Centre for Media and Freedom of Expression; arrested by the Syrian authorities, on 5 November 2012, in Damascus. Died during detention in November 2012

Wael Hamada - Human Rights Defender, abducted by members of the armed groups, on 9 December 2013, in the Damascus suburb of Douma His fate and whereabouts remain unknown