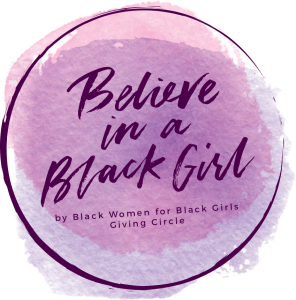 In 2009, the findings were compiled in a report titled, Black Girls in New York - Untold Strength & Resilience. The study found that: (1) poverty is one of the biggest challenges; (2) black girls face unique hurdles in educational settings; (3) personal safety is a prime concern; (4) black girls have a distinct perspective on issues of self-esteem; and (5) faith, family, and racial identity are protective factors in the lives of black girls. Although most of the girls in the study faced many challenges, instead of despair there was a story of fortitude. Like Maya Angelou's poem, And Still I Rise, these girls rise above the obstacles life has placed before them.

The College Shower is held annually in the summer. Girls can apply or be nominated. The College Shower selects black girls entering their freshman year of college who live on campus. It provides linens, bedding, towels, laptops, and toiletries. Girls that maintain a 3.0 GPA are eligible for an additional tuition scholarship their second semester. Tianna Morris is a 2015 College Shower Honoree and scholarship recipient. She said, "It was a wonderful experience to know that people cared and gifted me with so many things. The scholarship knocked out student loans that I would have had to take out. Plus, I am super close to my mentor. I can talk to her about everything. It helps to know that she grew up in Harlem and has done well. I can identify with her."

Believe in a Black Girl Summit is an inspirational and educational event connecting black girls throughout NYC and the surrounding areas to resources and information that will empower them to make positive life decisions. The Girl Summit brings together a panelists of black women from various professions and offers workshops for attendees on addressing the needs of black girls in NYC.

Black Women for Black Girls is seeking to make a bigger impact with its Believe in a Black Girl Campaign. To be part of the #BelieveInABlackGirl movement, all are invited to attend the campaign launch dinner on Thursday, March 17th.

This originally appeared on Mr. Refined, where Ronda is a contributing writer.