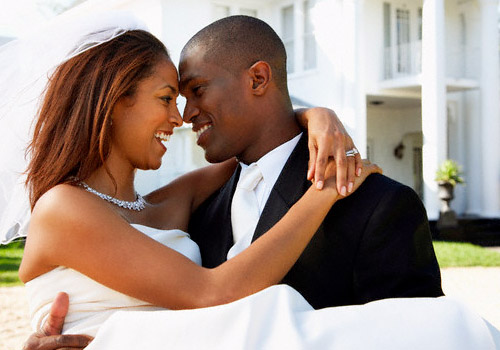 I was walking down 125th St. on a wet, dreary day in NYC when I received a text from an acquaintance about her debut appearance on Nightline. I wasn't in the least bit surprised that the topic of discussion for the trillionth time was unwed black women and them exploring interracial options. I was genuinely happy for her opportunity, but I was so over mainstream media's obsession with who black women do or don't date/marry.

Once again the popularity of our love lives has sky rocketed due to Ralph Richard Banks' latest book, Is Marriage for White People? According to Banks, black women should stop limiting their options to black men. "It's time for black women to stop being held hostage to the deficiencies of black men," Banks says. "They should emancipate themselves and not feel as if they have no option but make the best of this bad situation. Black women have been taking one for the team for a long time." For the record, Banks is married to a black woman.

I really don't care about Banks' hypothesis. After his horrid article, "Why black women are justifiably bitter: The bleak relationship picture for African-American females" on NYDailyNews.com, there is nothing Banks can tell me about relationships.

I am, however, annoyed that black women's singleness has become a spectacle. For starters, this story has been covered ad naseum since 2009. The Washington Post was ahead of the curve with Joy Jones' "Marriage Is for White People" in 2006, hence the inspiration for the title of Banks' book. What's also troublesome is the focus on the so-called dreadful statistic of unwed black women while fewer Americans in general are marrying. Where's all the chatter about white, Asian and Latina single ladies? Anyone who has spent any time around young professional white women would know that they too are frustrated with dating. Yet, unlike Nightline's 2010 "Face Off: Why Can't a Successful Black Woman Find a Man?" special, no white celebrities were called for a panel discussion about the 45% of unmarried white women .

It is beyond problematic that authors, journalists, researchers, social commentators and mainstream media find that black women's singleness is a crisis, and that the solution is to marry white men. Single white women are never told to "date outside their race," "stop being so loyal to white men" or "marry a black man!" Why then would we accept that black women must date, marry and procreate with a white man to solve our relationship woes? I call patriarchy and white privilege. Let's be clear of what's going on here with the media's propaganda.

First and foremost, the media is only exhaustively covering this topic because it's popular. Outside of site hits and ratings, the goal is really quite simple and has been happening since the 19th century. The tragic single black woman meme reinforces that black women are unlovable. And why are we unlovable? Because, you know, we're loud, angry, attitudinal, "ghetto" and whores. If we happen to be the educated bunch we're still unlovable, but for a different reason. Educated black women are unlovable because we are emasculating bitches who don't know our place.

I am completely against the narrative around black women's dating life, marriages and wombs from people have no vested interest in black women or black men. The conversation that is being had is both destructive and thoughtless. Black women are fine. We don't need a come to Jesus moment. None of the black women I know (and I know countless highly educated, talented, kind, giving, creative, brilliant black women) need the media or anyone else to tell them who to date. If they want to date white men they do. And if they want to remain loyal to black men, by all means, please fucking let us.

As I changed the channel to watch Evie on Nightline I thought of the tweet a few weeks the Wall Street Journal tweeted: "We're hosting a conversation: should black women marry outside their race? Submit your opinions and questions: http://on.wsj.com/pksh5d." My timeline filled quickly with the fury of women (of all races) retweeting with comments such as: "Again?" "Why?" "Oh god no." And I added, "Please let this topic die a quick death."

I don't know any black women who gain anything from these articles, books and Nightline segments dissecting our "singleness." In fact, the response is always something along the lines of: "I still don't get the fascination with black women and who they marry or if they marry." (Direct quote from a black woman on Twitter).

As Nightline ended its segment featuring Banks and Evie I clutched my pearls when the host said, "Thanks to Lindsey Davis for solving that perplexing problem." Now that the "perplexing problem" of who black women date and marry is quote unquote solved, can we move on? Nothing here to see folks.