Of course all words matter. Every word in every language has a specific meaning, and when we speak or write we choose our words carefully to ensure our message resonates and is understood. But black words truly matter more. Why? Because I'm referring to the dictionary definition of black as "full of anger or hatred."

Black words are purposely chosen for maximum impact. They cut deep, linger in the air, and endure in one's consciousness. I'm sure several examples have already popped into your mind - perhaps the N-word, some misogynist adjectives and nouns describing women, or ethnic slurs that span multiple continents. But those black words are easy to recognize and avoid. Those are not the black words I'm most concerned about.

The most dangerous and insidious black words are those that appear innocuous. Words whose denotation is factual and reasonable but whose connotations represent a fomenting cauldron of exclusion, repression, and hate. Those connotations are communicated via the broad context of place and purpose, the speaker's tone of voice, or the words that immediately precede or follow.

"Refugee," "illegals," and "Muslim" are the best current examples of how disparate the literal meaning of a word can be to its implication. Refugee used to mean the "huddled masses" who came to the U.S. as their last best hope. Now it's become a form of NIMBY, fear-mongering nationalism. Illegals used to refer to people who were "in a country without official authorization." One could argue it still means that today, but it also means dark-skinned criminals and rapists who are stealing American jobs and destroying our culture. And Muslim, of course, literally refers to followers of Islam. As used by reactionary zealots, however, it means 1.6 billion non-Christians intent on death and destruction to all things non-Islamic. 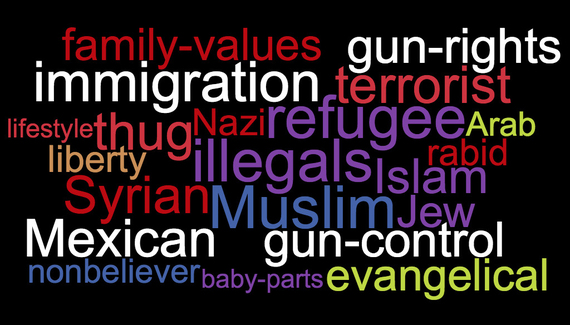 At this point it's only fair to give equal time to the black words often employed by the more liberal side of the political spectrum. "Evangelical" is defined as a wing of Christianity that views the Bible as the literal word of God. Now it's often used to demean Southerners and Midwesterners who are pro-life and against gay marriage. The term "1%" refers to the top one-percent of earners. Today it's spit out as an epithet for a culture of greed and corruption. And "climate deniers" refers to people who do not believe the earth is warming and/or do not believe it's caused by human activity. As used by many on the left, however, it means anyone who receives campaign contributions from the Koch brothers and/or hails from an energy-producing region of the country.

Martin Luther King Jr. told us, "Racism is evil because its ultimate logic is genocide." Today's corollary is this: "Black words are evil because their ultimate logic is fear, loathing, disrespect, and oppression." Black words are sometimes delivered with a wink and a nod. Sometimes with a smirk or Cheshire grin. And almost always with a clear and present understanding of the inference the speaker is hoping to engender. Black words serve as a proselytizing shorthand that allow one to quickly backtrack and take shelter beneath the refuge of the literal meaning.

No one can know for sure exactly what resides in a person's heart when he or she uses black words. I'm tempted to suggest "no one can be sure except for the speaker," but I don't believe that's always the case. The first time someone turns "Mexican" or "born-again" into an insult, it's certainly intentional. Over time, however, it simply becomes part of the vernacular. The surprising becomes commonplace. The overt becomes nuanced. People become desensitized to the feelings and interpretations of themselves and others. It quickly becomes a mixed metaphor of vicious circles, slippery slopes, and rabbit holes with no light at the end of the tunnel.

Black words matter today more than ever. In what we say or write. At home. In the workplace. In the community. We are what we say.